The Black Sea is a Goldmine of Ancient Genetic Data

When Woods Hole Oceanographic Institution (WHOI) marine paleoecologist Marco Coolen was mining through vast amounts of genetic data from the Black Sea sediment record, he was amazed about the variety of past plankton species that left behind their genetic makeup (i.e., the plankton paleome).

The semi-isolated Black Sea is highly sensitive to climate driven environmental changes, and the underlying sediments represent high-resolution archives of past continental climate and concurrent hydrologic changes in the basin. The brackish Black Sea is currently receiving salty Mediterranean waters via the narrow Strait of Bosphorus as well as freshwater from rivers and via precipitation.

“However, during glacial sea level lowstands, the marine connection was hindered, and the Black Sea functioned as a giant lake,” says WHOI geologist Liviu Giosan. 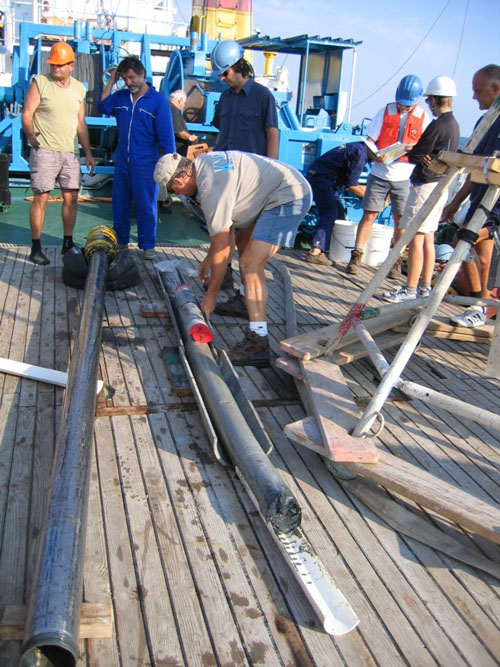 WHOI researcher Alan Gagnon, Marco Coolen (center, in blue safety helmet), and the crew from the Bulgarian research vessel Akademik sample the sediment core that was used for this study. (Photo courtesy of Dimitri Dimitrov from the Institute of Oceanology, Bulgarian Academy of Sciences (IO-BAS))

He added that “the dynamics of the environmental changes from the Late Glacial into the Holocene (last 10,000 years) remain a matter of debate, and information on how these changes affected the plankton ecology of the Black Sea is sparse.”

Using a combination of advanced ancient DNA techniques and tools to reconstruct the past climate, Coolen, Giosan, and their colleagues have determined how communities of plankton have responded to changes in climate and the influence of humans over the last 11,400 years. Their results will be published in the Proceedings of the National Academy of Sciences, USA (PNAS), and will be available online on May 6.

Researchers traditionally reconstruct the make up of plankton by using a microscope to count the fossil skeletons found in sediment cores. But, this method is limited because most plankton leave no fossils, so instead Coolen looked for sedimentary genomic remains of the past inhabitants of the Black Sea water column.

“DNA offers the best opportunity to learn the past ecology of the Black Sea,” says Coolen. “For example, calcareous and organic-walled dinocysts are frequently used to reconstruct past environmental conditions, but 90 percent of the dinoflagellate species do not produce such diagnostic resting stages, yet their DNA remains in the fossil record.” 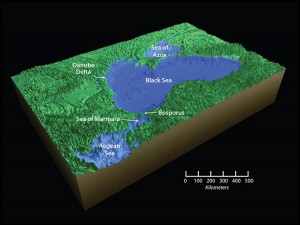 The breach of the Bosporus sill connected the Black Sea to the Sea of Marmara and the world ocean. As glaciers melted and global sea levels began to rise, the Black Sea also rose, bringing it to its present day level. Image credit: Jack Cook, Woods Hole Oceanographic Institution (Click image to enlarge)

However, ancient DNA signatures in marine sediments have thus far been used for targeted reconstruction of specific plankton groups and those studies were based on very small clone libraries. Instead, the researchers used a high throughput next generation DNA sequencing approach called pyrosequencing to look for the overall plankton changes in the Back Sea from the deglaciation to recent times.

In addition, the researchers reconstructed past changes in salinity and temperature as the possible causes for plankton community shifts in the Black Sea.

To reconstruct the salinity, the WHOI team analyzed sediments containing highly resistant organic compounds called alkenones, which are uniquely produced by Emiliania huxleyi—the same photosynthetic organism oceanographers study to determine past sea surface temperatures. By examining the ratio of two hydrogen isotopes in the alkenones, they were able to map the salinity trend in the Black Sea over the last 6,500 years.

“One of the isotopes, deuterium, is not very common in nature,” explains Coolen, “And it doesn’t evaporate as easily as other isotopes. Higher ratios of deuterium are indicative of higher salinity.”

The WHOI team was funded through the National Science Foundation and they collaborated with Chris Quince and his postdoc Keith Harris from the Computational Microbial Genomics Group at the University of Glasgow, and with micropaloentologist Mariana Filipova-Marinova from the Natural History Museum in Varna, Bulgaria.

Their study revealed that 150 of 2,710 identified plankton showed a statistically significantly response to four environmental stages since the deglacial. Freshwater green algae were the best indicator species for lake conditions more than 9,000 years ago although the co-presence of previously unidentified marine plankton species indicated that the Black Sea might have been influenced to some extent by the Mediterranean Sea over at least the past 9,600 years. Dinoflagellates, cercozoa, eustigmatophytes, and haptophyte algae responded most dramatically to the gradual increase in salinity after the latest marine reconnection and during the warm and moist mid-Holocene climatic optimum. Salinity increased rapidly with the onset of the dry Subboreal climate stage after ca. 5200 years ago leading to an increase in marine fungi and the first occurrence of marine copepods. A gradual succession of phytoplankton such as dinoflagellates, diatoms, and golden algae occurred during refreshening of the Black Sea with the onset of the cool and wet Subatlantic climate around 2500 years ago. The most drastic changes in plankton occurred over the last century associated with recent human disturbances in the region.

The new findings show how sensitive marine ecosystems are to climate and human impact. The high throughput sequencing of ancient DNA signatures allows us to reconstruct a large part of ancient oceanic life including organisms that are not preserved as fossils.

Coolen added that ancient plankton DNA was even preserved in the oldest analyzed Black Sea lake sediments when the entire water column was most likely well mixed and oxygenated. This means that ancient plankton DNA might be widely preserved in sediments and can likely be used to reconstruct past life in the majority of oceanic and lake environments.