Diamond in the rough

Cubic zirconia has long been favored for its use in costume jewelry.

Known scientifically as yttria-stabilized zirconia, it is also a known conductor of oxygen, making it useful as an electrolyte in solid oxide fuel cells.

Researchers at the University of Delaware recently fabricated the material into very thin films on the surface of sapphire crystals using a technique called sputtering to determine whether the conductivity for oxygen could be improved, enabling solid oxide fuel cells to become a more economical and efficient electrical power source.

In their study, Joshua Hertz and his team examined the effect of reducing the thickness of the yttria-stabilized zirconia down to about 6 nanometers — roughly 20 atoms thick.

The research team found that a consequence of making the material so thin is that the distance between the atoms increases, stretching as much as roughly 2 percent. 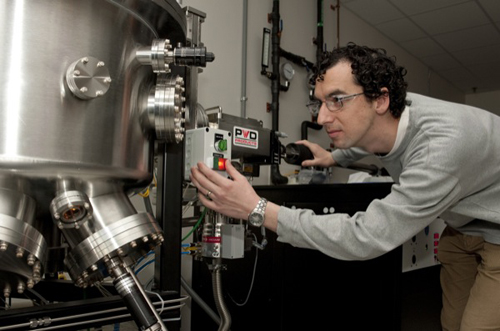 “This may sound like a small amount, but it represents a very large effect for this material, which, like most ceramics, does not easily stretch,” explained Hertz, assistant professor of mechanical engineering.

More importantly, the stretching increased the material’s oxygen conductivity by a factor of 10.

This improved conductivity may open the door for more efficient and durable solid state electrochemical devices like solid oxide fuel cells and oxygen sensors that can operate at reduced temperatures.

“We believe similar methods may be of use to batteries and other devices that use different solid electrolyte materials,” added the paper’s lead author Jun Jiang, a UD doctoral student studying materials science and engineering. 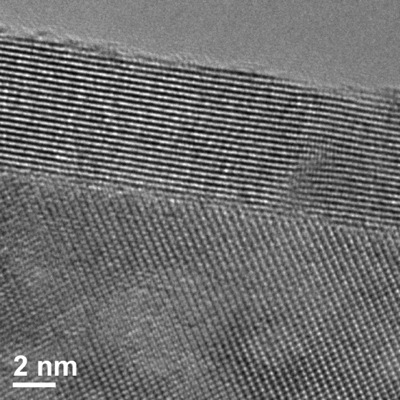 An image of the yttria-stabilized zirconia film (parallel rows near the top) on top of a sapphire substrate (spotted array near the bottom) created using a transmission electron microscope. Bright spots indicate rows or columns of atoms and demonstrate that the distance between the rows of yttria-stabilized zirconia atoms increase in such thin films. Photo by Kathy F. Atkinson

Co-authors of the paper include Hertz, doctoral students Xiaocao Hu and Weida Shen, and Chaoying Ni, associate professor of materials science and engineering.

The research is supported in part through funding from the U.S. Department of Energy Office of Science.