Steve Schirripa, best known for his television roles on The Sopranos and The Secret Life of the American Teenager, spoke Monday, Feb. 13, in Mitchell Hall about his experience in the entertainment industry.

Peter X. Feng, an associate professor of English with an expertise in film and literature, conducted the on-stage interview in an Inside the Actors Studio-type format.

Schirripa, who grew up in Brooklyn, N.Y., started as an entertainment director in Las Vegas, booking acts such as the Wayans brothers, Ellen DeGeneres and the Beach Boys. While he was working in a comedy club, he was recommended to read lines and audition for a show.

His movie debut came in Martin Scorsese’s 1995 Casino, in which he had a single line: “Joey, look out, look out.” After that, he continued his acting career although he was married with two kids — daughter Bria is now a student at UD — at the time. 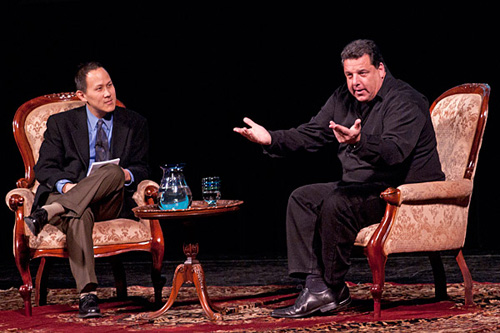 Schirripa’s breakthrough role was in HBO’s The Sopranos, playing Bobby Baccalieri for six seasons. He told the audience he did not know anything about The Sopranos until he auditioned for the role of an FBI agent. The casting directors did not see him in that part, but they thought the character of Bobby Baccalieri was a perfect fit. He described getting the job on The Sopranos as “hitting the lottery.”

At first, Schirripa said, he was hesitant to commit to The Sopranos because he did not want to be away from his family and it didn’t seem like a steady job. But “I listened to my wife, who told me to go back and do the show because it [acting] was the only thing that made me happy,” he said.

Still, he didn’t feel a sense of job security, he said: “I rented a house every year because I was afraid that I was going to get killed off.” Schirripa never knew when Bobby might be “whacked,” he said, because high-profile characters on the show seemed more likely to be killed off in a script.

“If you got out of line, they would kill you, so I behaved myself,” he said jokingly. 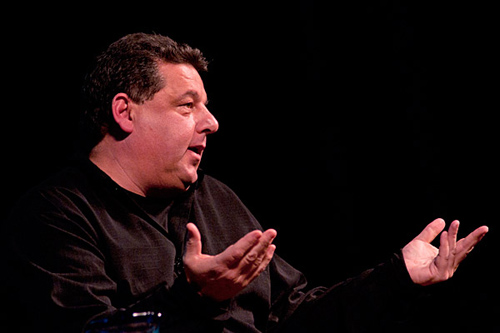 Feng showed clips from The Sopranos and ABC Family’s The Secret Life of the American Teenager as examples of Schirripa’s work. After watching an emotional scene when his Sopranos wife dies in the third-season episode, “Christopher,” Schirripa said he “didn’t really go to cast members for [acting] advice because everyone does something different—it’s something they can’t answer.”

Once The Sopranos was over, Schirripa was offered other mob roles because people wanted him to “stay in the box,” he said, but he wanted something different. He turned down VH1’s Celebrity Fit Club, NBC’s Celebrity Apprentice and ABC’s Dancing with the Stars because, he said, “I didn’t want to make a complete ass out of myself.”

Instead, Schirripa chose to play Leo Boykewich, Ben’s dad, on The Secret Life of the American Teenager, which begins filming its fifth season next week.

He has had guest roles on Ugly Betty, King of Queens and Law and Order. “Every New York actor does Law and Order,” he said.

Schirripa is also a New York Times bestselling author for his humorous books, A Goomba’s Guide to Life, The Goomba’s Book of Love and The Goomba Diet: Living Large and Loving It. He has also written Nicky Deuce: Welcome to the Family and Nicky Deuce: Home for the Holidays.

“You are my Goomba now,” Schirripa said to Feng after talking about his accomplishments.

Currently, Schirripa is the executive producer of Nothing Personal on Investigation Discovery, is in the process of having Nicky Deuce: Welcome to the Family being made into a movie by Nickelodeon and is planning to write another book.

The presentation was sponsored by UD’s Department of English.