With the daily mean concentrations of atmospheric carbon dioxide having reached 400 parts-per-million for the first time in human history, the need for carbon-neutral alternatives to fossil fuel energy has never been more compelling. With enough energy in one hour’s worth of global sunlight to meet all human needs for a year, solar technologies are an ideal solution. However, a major challenge is to develop efficient ways to convert solar energy into electrochemical energy on a massive-scale. A key to meeting this challenge may lie in the ability to test such energy conversion schemes on the micro-scale.

Berkeley Lab researchers, working at the Joint Center for Artificial Photosynthesis (JCAP), have developed the first fully integrated microfluidic test-bed for evaluating and optimizing solar-driven electrochemical energy conversion systems. This test-bed system has already been used to study schemes for photovoltaic electrolysis of water, and can be readily adapted to study proposed artificial photosynthesis and fuel cell technologies.

“We’ve demonstrated a microfluidic electrolyzer for water splitting in which all functional components can be easily exchanged and tailored for optimization,” says Joel Ager, a staff scientist with Berkeley Lab’s Materials Sciences Division. “This allows us to test on a small scale strategies that can be applied to large scale systems.” 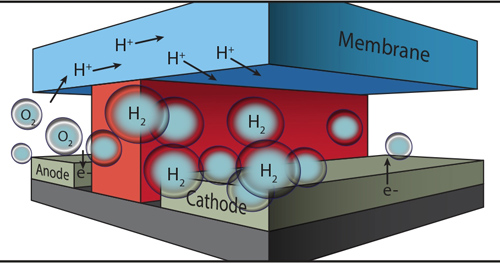 In this microfluidic test-bed, a chemically inert wall (red) separates anode from cathode and the channels in which O2 and H2 are generated by splitting water molecules. Protons (H+) are conducted from one channel to the other via a membrane cap (Nafion®) that also prevents the intermixing of the O2 and H2 product streams. Image credit: Berkeley Lab

For more than two billion years, nature has employed photosynthesis to oxidize water into molecular oxygen. An artificial version of photosynthesis is regarded as one of the most promising of solar technologies. JCAP is a multi-institutional partnership led by the California Institute of Technology (Caltech) and Berkeley Lab with operations in Berkeley (JCAP-North) and Pasadena (JCAP-South).  The JCAP mission is to develop an artificial version of photosynthesis through specialized membranes made from nano-engineered materials that can do what nature does only much more efficiently and for the purpose of producing storable fuels such as hydrogen or hydrocarbons (gasoline, diesel, etc.).

“The operating principles of artificial photosynthetic systems are similar to redox flow batteries and fuel cells in that charge-carriers need to be transported to electrodes, reactants need to be fed to catalytic centers, products need to be extracted, and ionic transport both from the electrolyte to catalytic centers and across channels needs to occur,” Ager says. “While there have been a number of artificial photosynthesis demonstrations that have achieved attractive solar to hydrogen conversion efficiencies, relatively few have included all of the operating principles, especially the chemical isolation of the cathode and anode.” 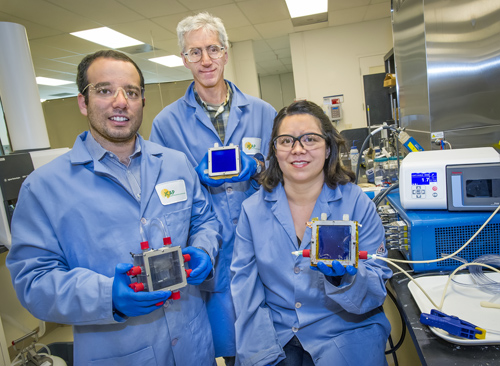 The microfluidic test-bed developed by Ager and his colleagues at JCAP-N allows for different anode and cathode materials to be integrated and electrically accessed independently through macroscopic contacts patterned in the outside of the microfabricated chip. The transport of charge-carriers occurs through an ion conducting polymer membrane, and electrolysis products can be evolved and collected in separated streams. This general design provides selective catalysis at the cathode and anode, minimization of cross-over losses, and managed transport of the reactants. Virtually any photoelectrochemical component, including those made of earth-abundant elements, can be incorporated into the test-bed.

Says Modestino, the lead author of the PCCP paper, “In our experimental realization of the design, a series of 19 parallel channels were fabricated in each device, with a total active area of eight square millimeters. As the microfabricated chips are relatively easy to make, we can readily change dimensions and materials to optimize performance.”