A new study that calculates the influence of cloud behavior on climate doubles the number of potentially habitable planets orbiting red dwarfs, the most common type of star in the universe. This finding means that in the Milky Way galaxy alone, 60 billion planets may be orbiting red dwarf stars in the habitable zone.

Researchers at the University of Chicago and Northwestern University based their study, which appears in Astrophysical Journal Letters, on rigorous computer simulations of cloud behavior on alien planets. This cloud behavior dramatically expanded the estimated habitable zone of red dwarfs, which are much smaller and fainter than stars like the sun.

Current data from NASA’s Kepler Mission, a space observatory searching for Earth-like planets orbiting other stars, suggest there is approximately one Earth-size planet in the habitable zone of each red dwarf. The UChicago-Northwestern study roughly doubles that estimate. It also suggests new ways for astronomers to test whether planets orbiting red dwarfs have cloud cover.

“Most of the planets in the Milky Way orbit red dwarfs,” said Nicolas Cowan, a postdoctoral fellow at Northwestern’s Center for Interdisciplinary Exploration and Research in Astrophysics. “A thermostat that makes such planets more clement means we don’t have to look as far to find a habitable planet.” 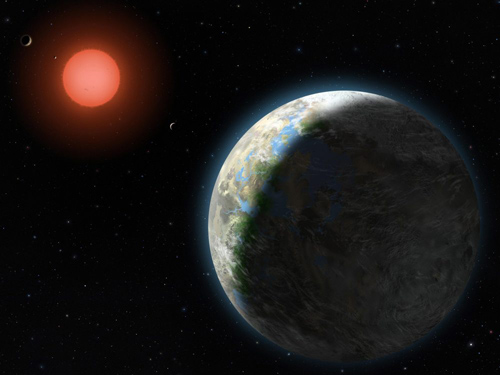 A planet with clouds and surface water orbits a red dwarf star in this artist’s conception of the Gliese 581 star system. New findings from the University of Chicago and Northwestern University show that planets orbiting red dwarf stars are more likely to be habitable than previously believed. Illustration by Lynette Cook

Cowan joins UChicago’s Dorian Abbot and Jun Yang as co-authors on the study. The scholars also provide astronomers with a means of verifying their conclusions with the James Webb Space Telescope, scheduled for launch in 2018.

The habitable zone refers to the space around a star where orbiting planets can maintain liquid water at their surface. The formula for calculating that zone has remained much the same for decades. But that approach largely neglects clouds, which exert a major climatic influence.

“Clouds cause warming, and they cause cooling on Earth,” said Abbot, an assistant professor in geophysical sciences. “They reflect sunlight to cool things off, and they absorb infrared radiation from the surface to make a greenhouse effect. That’s part of what keeps the planet warm enough to sustain life.”

A planet orbiting a star like the sun would have to complete an orbit approximately once a year to be far enough away to maintain water on its surface. “If you’re orbiting around a low-mass or dwarf star, you have to orbit about once a month, once every two months to receive the same amount of sunlight that we receive from the sun,” Cowan said. 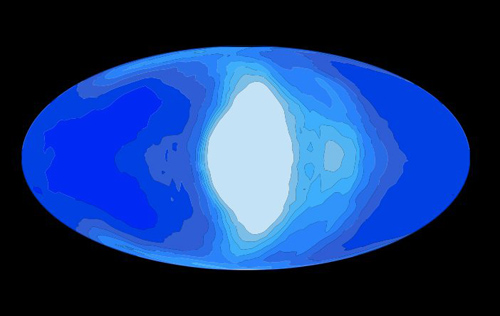 This illustration shows simulated cloud coverage (white) on a tidally locked planet (blue) that would be orbiting a red dwarf star. Planetary scientists at UChicago and Northwestern are applying global climate simulations to problems in astronomy. Illustration by Jun Yang

Planets in such a tight orbit would eventually become tidally locked with their sun. They would always keep the same side facing the sun, as the moon does toward Earth. Calculations of the UChicago-Northwestern team indicate that the star-facing side of the planet would experience vigorous convection and highly reflective clouds at a point that astronomers call the sub-stellar region. At that location the sun always sits directly overhead, at high noon.

The team’s three-dimensional global calculations determined, for the first time, the effect of water clouds on the inner edge of the habitable zone. The simulations are similar to the global climate simulations that scientists use to predict Earth’s climate. These required several months of processing, running mostly on a cluster of 216 networked computers at UChicago. Previous attempts to simulate the inner edge of exoplanet habitable zones were one-dimensional. They mostly neglected clouds, focusing instead on charting how temperature decreases with altitude.

“There’s no way you can do clouds properly in one dimension,” Cowan said. “But in a three-dimensional model, you’re actually simulating the way air moves and the way moisture moves through the entire atmosphere of the planet.” 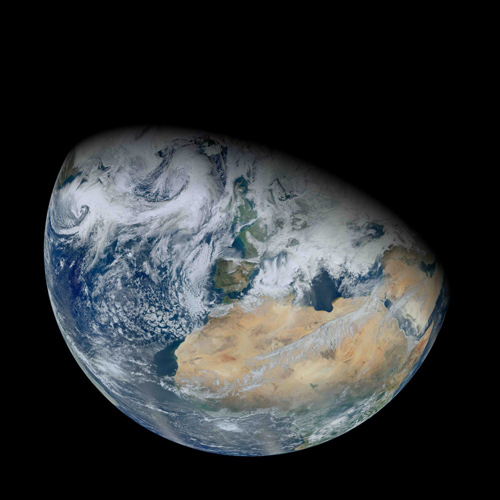 These new simulations show that if there is any surface water on the planet, water clouds result. The simulations further show that cloud behavior has a significant cooling effect on the inner portion of the habitable zone, enabling planets to sustain water on their surfaces much closer to their sun.

Astronomers observing with the James Webb Telescope will be able to test the validity of these findings by measuring the temperature of the planet at different points in its orbit. If a tidally locked exoplanet lacks significant cloud cover, astronomers will measure the highest temperatures when the dayside of the exoplanet is facing the telescope, which occurs when the planet is on the far side of its star. Once the planet comes back around to show its dark side to the telescope, temperatures would reach their lowest point.

But if highly reflective clouds dominate the dayside of the exoplanet, they will block a lot of infrared radiation from the surface, said Yang, a postdoctoral scientist in geophysical sciences. In that situation “you would measure the coldest temperatures when the planet is on the opposite side, and you would measure the warmest temperatures when you are looking at the night side, because there you are actually looking at the surface rather than these high clouds,” Yang said.

Earth-observing satellites have documented this effect. “If you look at Brazil or Indonesia with an infrared telescope from space, it can look cold, and that’s because you’re seeing the cloud deck,” Cowan said. “The cloud deck is at high altitude, and it’s extremely cold up there.”

If the James Webb Telescope detects this signal from an exoplanet, Abbot noted, “it’s almost definitely from clouds, and it’s a confirmation that you do have surface liquid water.”

— Megan Fellman of Northwestern University contributed to this report.