Boat noise disrupts orientation behaviour in larval coral reef fish, according to new research from the Universities of Exeter, Bristol and Liège.

Reef fish are normally attracted by reef sound but the study, conducted in French Polynesia, found that fish are more likely to swim away from recordings of reefs when boat noise is added.

Co-author, Dr Steve Simpson, a marine biologist at the University of Exeter, said: “Boat noise may scare fish, affecting their ecology.  Since one in five people in the world rely on fish as their major source of protein, regulating traffic noise in important fisheries areas could help marine communities and the people that depend on them.”

Sound travels better underwater than in air and reefs are naturally noisy places: fish and invertebrates produce feeding and territorial sounds while wind, waves and currents create other background noise.  Boats can be found around all coastal environments where people live and the noise they make spreads far and wide. 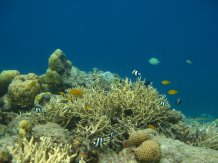 Sophie Holles, a PhD researcher at the University of Bristol and one of the study’s authors, said: “Natural underwater sound is used by many animals to find suitable habitat, and traffic noise is one of the most widespread pollutants.  If settlement is disrupted by boat traffic, the resilience of habitats like reefs could be affected.”

The study, published in Marine Ecology Progress Series, used controlled field experiments with settlement stage coral reef fish larvae.  Larvae in a long plastic tube could decide to swim towards or away from a speaker playing back different sounds.  In ambient noise equal numbers of fish were found in each section of the tube and in reef noise most fish swam towards the sound.  But when boat noise was played along with reef noise more fish swam away from the sound than in reef noise alone.

Co-author, Dr Andy Radford from the University of Bristol, said: “This is the first indication that noise pollution can affect orientation behaviour during the critical settlement stage.  Growing evidence for the impact of noise on fish suggests that consideration should be given to the regulation of human activities in protected areas.”