People in most cultures view women with small feet as attractive. Like smooth skin or an hourglass figure, petite feet signal a potential mate’s youth and fertility.

Because they signal reproductive potential, a preference for mates with these qualities may have evolved in the brains of our Pleistocene ancestors and are viewed by evolutionary psychologists as evidence that the preference is hard-wired into our genetic makeup.

But in new research published May 30 in the journal Human Nature, Geoff Kushnick, a University of Washington anthropologist, reports that the Karo Batak, who mostly live in scattered rural villages in the northern part of the Indonesian island of Sumatra, deem women with big feet as more appealing.

Kushnick, who studies the evolution of human reproductive strategies, suggests that culture – not just genetics – plays a role in deciding what makes a mate attractive. The Karo Batak predilection for big feet is linked to the society’s ecological context – that is, being rural and agricultural – and limited exposure to Western media, he found.

“Universal features of physical attractiveness are typically thought to suggest that mate choice criteria are hard-wired in humans and that they evolved tens of thousands of years ago,” Kushnick said.

“This new research supports that idea that cultural transmission of mate preferences allows humans to adapt to local environments, and this may trump hard-wired preferences.” 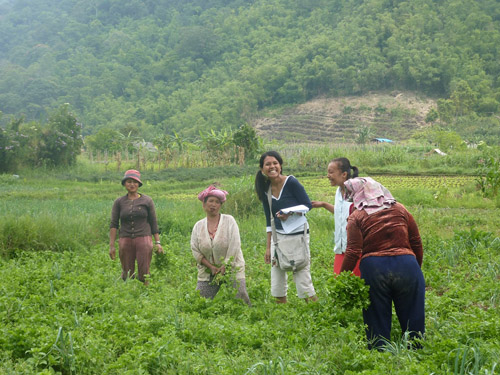 Kushnick showed 159 Karo Batak adults five drawings of a barefoot woman with her long hair pulled back and dressed in a shirt and a skirt reaching her mid-calf. The drawings were the same except for subtle differences in foot size.

Kushnick wondered why small-foot preferences weren’t universal. He compared his results with the earlier study and looked for an association between societies’ foot-size preferences and three potential causes – patriarchal values, rural versus urban ecology, and exposure to western media.

“My analyses support the notion that culturally transmitted preferences that allow people to adapt to local environments can trump evolved preferences,” Kushnick said. “Cultural and social influences play a stronger role in mate choice than some evolutionary psychologists are willing to accept.”

Or, as one male Karo Batak respondent was overheard saying: “Why would anyone like a woman with small feet? How would she work in the rice field?”

Big feet equal strength and greater productivity in the rice fields among the Karo Batak, who join other societies in challenging the one-size-fits-all notion of beauty.

The findings hint at how humans continue to evolve.

“The study adds more evidence of the potential for culture to drive human evolution,” Kushnick said. “Since mating preferences drive sexual selection, it is possible that male-female differences in relative foot size are the product of recent evolution.”