NASA’s Aura satellite, celebrating its 10th anniversary on July 15, has provided vital data about the cause, concentrations and impact of major air pollutants. With instruments providing key measurements of various gases – including two built and managed by NASA’s Jet Propulsion Laboratory: the Tropospheric Emission Spectrometer (TES) and Microwave Limb Sounder (MLS) — Aura gives a comprehensive view of one of the most important parts of Earth — the atmosphere.

Aura has improved our understanding of ozone, a versatile gas that both benefits and harms the atmosphere, depending on its location. Near the ground, ozone is a pollutant that damages plants and can decrease lung function in humans. Somewhat higher in the atmosphere, ozone affects climate as a greenhouse gas. Aura’s TES instrument provides measurements of ozone and other greenhouse gases. 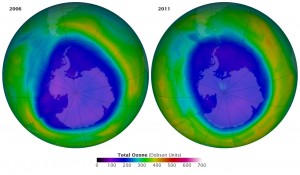 The maps show the Antarctic ozone hole on September 16 in 2006 and 2011, the two years with the lowest ozone concentrations ever measured. They were made with data from the Ozone Monitoring Instrument on Aura. Image Credit: NASA’s Earth Observatory (Click image to enlarge)

The majority of ozone, about 90 percent, is even higher — in the stratosphere, 12 to 90 miles above the surface — where it shields us from the sun’s ultraviolet light and makes life possible on Earth. Over the Antarctic, cold temperatures and human-produced chlorine gases destroy ozone each spring. Scientists use Aura’s Microwave Limb Sounder (MLS) instrument to measure ozone and other trace gases in and around the ozone hole every year. In 2006 and 2011, Aura’s instruments revealed two of the largest and deepest ozone holes in the past decade, and also helped scientists understand the different causes of the two large holes.

Shortly after Aura’s launch, the Ozone Monitoring Instrument (OMI) began monitoring levels of another major pollutant — nitrogen dioxide. This brownish gas can lead to respiratory problems and is an ingredient in ground-level ozone pollution. OMI data show that nitrogen dioxide levels in the United States decreased 4 percent per year from 2005 to 2010, a time when stricter policies on power plant and vehicle emissions came into effect. As a result, concentrations of ground-level ozone also decreased. During the same period, global nitrogen dioxide levels increased a little over half a percent per year. China’s level increased about 6 percent per year.

OMI also measures sulfur dioxide, a gas that combines with other chemicals in clouds to produce acid rain or reacts to form sulfate aerosols, which affect health and climate. OMI has identified large concentrations of sulfur dioxide around power plants and volcanoes.

Aura’s decade of work has set the stage for future air quality monitoring instruments. The European Space Agency will be launching the follow-up TROPOspheric Monitoring Instrument, which will continue Aura’s OMI measurements with better ground resolution and precision. NASA plans to launch the Tropospheric Emissions: Monitoring of Pollution (TEMPO) instrument, which will observe ozone, nitrogen dioxide, sulfur dioxide, formaldehyde and aerosols over the United States, Canada and Mexico.

“Pollution is a global issue because it can travel long distances in the wind,” said Anne Douglass, Aura project scientist at NASA’s Goddard Space Flight Center in Greenbelt, Maryland. “By using satellites, we can develop a valuable global inventory of pollutants and understand how air quality may be changing.”

For more on TES, visit:

For more on MLS, visit: