ANN ARBOR — A team of scientists from the University of Michigan, Duke Medicine and Stanford University has determined the underlying architecture of a cellular signaling complex involved in the body’s response to stimuli such as light and pain.

This complex, consisting of a human cell surface receptor and its regulatory protein, reveals a two-step mechanism that has been hypothesized previously but not directly documented.

The findings, scheduled for online publication in Nature on June 22, provide structural images of a G-protein coupled receptor (GPCR) in action.

“It is crucial to visualize how these receptors work to fully appreciate how our bodies respond to a wide array of stimuli, including light, hormones and various chemicals,” said co-senior author Robert Lefkowitz, the James B. Duke Professor of Medicine at Duke University School of Medicine and Howard Hughes Medical Institute investigator. 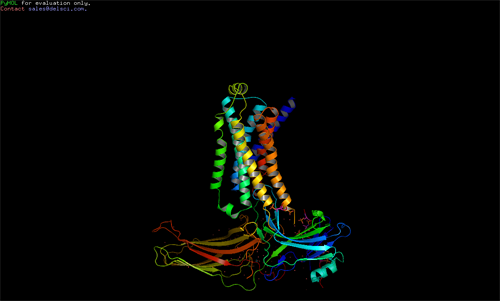 Lefkowitz is co-senior author with Georgios Skiniotis, the Jack E. Dixon Collegiate Professor at the Life Sciences Institute at the University of Michigan, and Brian Kobilka, the Helene Irwin Fagan Chair in Cardiology at Stanford University School of Medicine. Lefkowitz and Kobilka shared the 2012 Nobel Prize in Chemistry for their discoveries involving GPCRs.

GPCRs represent the largest family of drug targets for human diseases, including cardiovascular disorders, neurological ailments and various types of cancer. The protein beta arrestin is key for regulating these receptors, and the authors have visualized a complex of the protein beta arrestin along with the receptor involved in the “fight-or-flight” response in humans.

“Arrestin’s primary role is to put the cap on GPCR signaling. Elucidating the structure of this complex is crucial for understanding how the receptors are desensitized in order to prevent aberrant signaling,” Skiniotis said.

“High-resolution visualization of this signaling assembly is challenging because the protein complexes are transient and highly dynamic, and large amounts of the isolated proteins are required for the experiments,” said co-lead author Arun Shukla, who worked with Lefkowitz at Duke and is now setting up an independent laboratory in the Department of Biological Sciences and Bioengineering at the Indian Institute of Technology, Kanpur.

Once the authors had material available for direct structural visualization, they used electron microscopy to reveal how the individual molecules of this signaling assembly are organized with respect to each other.

The researchers then combined thousands of individual images to generate a better picture of the molecular architecture. They further clarified this picture by cross-linking analysis and mass spectrometry measurements.

The authors next aim to obtain greater detail about this assembly using X-ray crystallography, a technology that should reveal atomic level insights into this architecture. Such atomic details could then be used in experiments to design novel drugs and develop a better understanding of fundamental concepts in GPCR biology.

“This is just a start and there is a long way to go,” Shukla said. “We have to visualize similar complexes of other GPCRs to develop a comprehensive understanding of this family of receptors.”