In the fall of 2010, Hoi-Ying Holman of the U.S. Department of Energy’s Lawrence Berkeley National Laboratory (Berkeley Lab) was approached by an international team researching a mysterious microbial community discovered deep in cold sulfur springs in southern Germany.

“They told me what they were doing and said, ‘We know what you contributed to the oil-spill research,’” recalls Holman, who heads the Chemical Ecology group in Berkeley Lab’s Earth Sciences Division. “They wondered if I could help them determine the biochemistry of their microbe samples.”

Holman had co-authored a report in Science about bacteria in the Gulf of Mexico that thrived on the Deepwater Horizon oil plume. Using infrared spectromicroscopy at the Berkeley Synchrotron Infrared Structural Biology (BSISB) facility, which she directs at the Advanced Light Source (ALS), Holman helped determine how the novel bug obtained energy by eating the spilled crude. No stranger to subsurface bioscience, Holman would soon add a new actor to her cast of remarkable microbes. 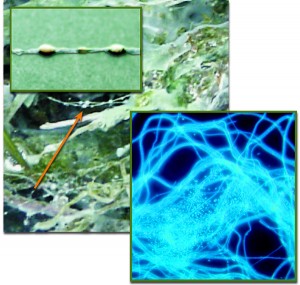 Strings of pearls (arrow and upper inset), whose “pearls” are up to three millimeters in diameter, were found where SM1 Euryarchaea live in close association with bacteria in the cold sulfidic streams of Germany’s Sippenauer Moor. Part of a pearl (lower inset) reveals colonies of microscopic spherical SM1 surrounded by filamentous bacteria. Image credit: Moissl-Eichinger group. (Click image to enlarge)

Not extreme, but weird anyway

The name Archaea means “ancient things,” but Archaea were recognized as a distinct domain of life less than forty years ago. First thought to be exclusively extremophiles – lovers of boiling hot springs, deep-sea black smokers, acid mine runoff, and other inhospitable environments – more and more archaea are found thriving in moderate and cold environments, almost always as minority members of much larger microbial communities.

A unique exception to this pattern was discovered less than 10 years ago in the Sippenauer Moor in Germany. In microbial mats in this cold sulfur spring’s outflow, the SM1 Euryarchaeon lives in roughly equal abundance with bacteria in a community that forms symbiotic “strings of pearls”: the archaea fill the “pearls” and filamentous bacteria cover the pearl surfaces and form strings between them. The two kinds of microbes were assumed to be syntrophic – dependent on each other for nourishment – but the biochemical details were a mystery.

Christine Moissl-Eichinger of the University of Regensburg was among the SM1 Euryarchaeon’s discoverers. Before long what she calls “another amazing lifestyle” of the new archaeon emerged; biofilms that grew deep below the surface of another cold sulfur spring, the nearby Muehlbacher Schwefelquelle. Moissl-Eichinger and her team collected samples of the slime-like biofilm – which first seemed to be pure SM1 – on net traps underwater.

To augment their already extensive research, Moissl-Eichinger and Alexander Probst of her staff brought the Regensburg samples to Berkeley Lab, initially attracted by the PhyloChip, a DNA microarray invented by Berkeley Lab’s Gary Andersen and Todd DeSantis and their colleagues. Because the PhyloChip probes for the 16S rRNA gene, found in all Bacteria and Archaea, it can quickly and accurately sort through all known species in a sample – including those, like SM1 and many other microorganisms, that can’t be grown in culture.

Probst and DeSantis, both now with Second Genome, Inc., and Andersen were joined by Kasthuri Venkateswaran of the Jet Propulsion Laboratory, a member of NASA’s Biotechnology and Planetary Protection Group. Probst wanted to know who was living where in the subsurface sulfur-spring samples; Venkateswaran’s interest is understanding the role of Archaea in space and analogous sites. Although SM1 was by far the dominant species in the subsurface community, they found that small amounts of other archaea were present as well – and about five percent of the community consisted of bacteria.

Fourier-transform spectromicroscopy of three samples of archaea-dominated biofilms from the Muehlbacher Schwefelquelle, using the Berkeley Synchrotron Infrared Structural Biology facility’s bright infrared beams, differentiates between archaea and bacteria by their lipid and carbohydrate signatures and shows that organic sulfates and carbonated minerals are located with the bacteria. Image credit: BSISB (Click image to enlarge)

Bring on the synchrotron

Led by Andersen, the PhyloChip’s inventors had contributed to the oil-spill research, and their previous association with Holman brought her and her BSISB colleagues aboard the SM1 research team.

“Lots of biochemical techniques can tell you what’s in a sample – lipids and carbohydrates, for example – but just because they’re there doesn’t mean they interact,” says Holman’s colleague Giovanni Birarda, a member of the BSISB staff. “Synchrotron radiation–based Fourier-transform infrared spectromicroscopy – SR-FTIR – takes images and spectra of the same sample, so you can map the chemical relationships by combining the images with spectra that identify where the archaea and bacteria are.”

By revealing the bright spectral signals of alkylic and methyl groups, together with sulfur functional groups, synchrotron FTIR unambiguously identified the sulfate-reducing metabolic activity of the bacteria within the SM1 samples. The archaeal cells themselves showed no such activity, leading the researchers to posit a thriving mutual metabolism of the archaea and bacteria.

In many cases, such syntrophy requires close physical association. Covering the surface of each SM1 cell the researchers found spines made of three protein strands, equipped with terminal hooks where the strands divided. Moissl-Eichinger named them hami, Latin for barbs or hooks. These “nano-grappling hooks” apparently hold the microbial partners together, working in synchronization. The major hami protein is unlike any known proteinaceous archaeal or bacterial filaments.

How SM1 Euryarchaea interact with their bacterial partners may be a model for understanding other syntrophic relations essential to the carbon and sulfur cycles on which Earth’s life depends. So far found in just two sites in Germany, the species is the only example yet of an archaeon that dominates a biological ecosystem – but related species have been found in sulfur springs as far afield as Turkey and may be widespread.

DOE’s Office of Science supported building and equipping the BSISB and also supports the ALS.