Since at least the 1970s, the population of critically endangered Sulawesi black macaques living in an Indonesian nature reserve has been dropping. But a new study by researchers at the University of Washington and in Indonesia shows that the population has stabilized over the past decade.

The findings, published in the January issue of the American Journal of Primatology, are from the longest ongoing survey of Macaca nigra and are among the first evidence that the monkeys may be in better shape.

“Fifteen years ago it looked like this macaque population would continue its decline and eventually disappear,” said Randall Kyes, lead author and UW research professor of psychology. This study “doesn’t mean that everything is fine now and that we no longer need to worry about the fate of these animals, but it is good news compared with what we’ve seen over the past 30-plus years in this reserve.” 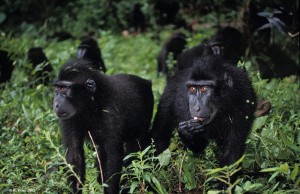 Since 1997, Kyes and his Indonesian colleagues have conducted conservation-related studies of the black macaques at the Tangkoko Nature Reserve in North Sulawesi, Indonesia – an area known for its biodiversity, which attracts flocks of tourists each year. He and his team began the newly published population survey in 1999 and collected data through 2011.

Searching a specified section of the forest, the researchers took two daily counts during a two- to three-week survey period each year of the study. They only recorded numbers of black macaques they saw, though they would often hear many others.

“We’ve found that the progressive decline has slowed,” Kyes said. “Somewhere over the last 10 years the trend has started to turn. We’re seeing the population in the balance now, but without the sustained efforts by local and international groups working in the reserve and the support and involvement of the local people, the macaques will likely face further decline.” 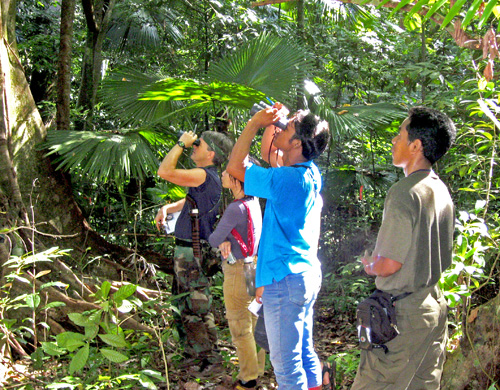 Hunting and habitat loss are the chief culprits in the black macaque population’s waning in recent decades. In North Sulawesi culture, black macaques are considered a food for special occasions, similar to a Thanksgiving turkey for people in the United States and Canada.

Though they did not examine this in their new study, the researchers’ outreach education efforts for children who live near the Tangkoko Nature Reserve may be helping to decrease illegal hunting and trapping of the animals. The researchers also hold an annual field course in conservation biology and global health for local university students and the community.

“We focus on the importance of the human-environment interface and the close relationship between environmental health and human health,” Kyes said. “We also emphasize how the black macaques support the local economy, by way of all the tourists who come to the nature reserve to see them.”

He said that outreach to children is particularly helpful. “We don’t chastise them for eating monkeys, but we do explain that there might not be many left in the future. We encourage them to ask their parents if there’s something else they can eat.”

The study was funded by the Woodland Park Zoo in Seattle, One Earth Institute in Seattle, the International Primatological Society and the National Institutes of Health.