‘Skulls of the Shogun’ Emerges as a Cross-Platform Gaming Pioneer

Classic arcade-inspired samurai game “Skulls of the Shogun” is available today for download play on Xbox 360, Windows Phone and Windows 8. Delving into the afterlife of a famous general, this is Microsoft’s first modern cross-platform game.

REDMOND, Wash. – Jan. 30, 2013 — With the new game “Skulls of the Shogun,” players can do something new: Switch back and forth between all of their Microsoft devices as they bounce from battle scene to battle scene.

The game, released today, is the first to reach all Microsoft platforms. “Skulls of the Shogun” can be downloaded and played on Xbox 360 via the Xbox LIVE Arcade, and on Windows Phone 8 and Windows 8 devices.

“’Skulls of Shogun’ is a title that really promotes this connected gaming world where you can play a game on any Microsoft device against other players, save it to the cloud, move to another device, and pick up where you left off,” said Christopher Rubyor, a senior game designer for Microsoft.

The story, in short: You are a famous general who dies on the eve of his last great battle and you wash up on the shores of the samurai afterlife. There you set out to defeat an evil impersonator, make your way through the afterlife to become the shogun, or general, of the dead, meeting and joining forces with ghost-samurai warriors, magical animal-monks and mustachioed samurai generals along the way. 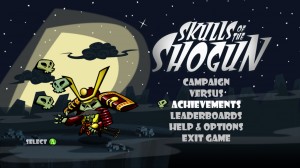 Influenced by samurai movies and 1960s-flavored sorcery, “Skulls of the Shogun” is a mash-up of classic arcade and “turn-based” strategy games, said Rod Chang, senior game producer at Microsoft.

“It pays homage to what we grew up playing, especially gamers of my generation who were addicted to turn-based strategy games,” Chang said. “I feel that the game ‘Skulls of the Shogun’ takes this genre of games that hardcore gamers grew up loving, and makes it accessible and fun for hardcore gamers and casual gamers alike.”

The game offers a 15-hour single-player campaign, but also has local and online multiplayer (up to four players) battles.

“The maps in the game range from small, blitz maps with five to 10 minutes of game play to larger campaigns that take hours,” Rubyor said. “You play at your own pace, and you can have up to four battles going on, bouncing back and forth. It’s actually a lot of fun.”

Never before has a Microsoft game been cross-platform at its launch. You can start playing “Skulls of the Shogun” on your Windows Phone 8 device while riding the bus, then press pause and pick up right where you left off on your Xbox 360 when you get home. In addition, players can compete cross-platform: Lucy in Iowa City can play “Skulls of the Shogun” on her Windows 8 PC against Edgar in Sarasota who is using a Surface RT.

Skulls Across Platforms. “Skulls of the Shogun” can be downloaded and played on Xbox 360 via the Xbox LIVE Arcade, and on Windows Phone 8 and Windows 8 devices. Image credit: Microsoft (Click image to enlarge)

The game’s developer, 17-BIT, pulled off a “monumental” task with no shortage of “daunting” logistical and technical challenges in order to create “Skulls of the Shogun” as a cross-platform game, said Rubyor and Chang, who worked closely with the Seattle-based boutique game developer.

“We’re pioneers,” Chang said. Though 17-BIT is a tiny company, it demonstrated some serious skill, adaptability and perseverance in launching the game for all of Microsoft’s platforms. That said, the effort to make “Skulls of the Shogun” cross-platform has definitely helped pave the way for other games to do the same, he said. 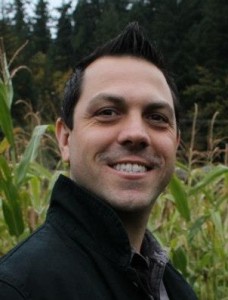 Christopher Rubyor, senior game designer for Microsoft, said “Skulls of the Shogun” is a title that promotes a connected gaming world in which players can move between devices. Image credit: Microsoft

“I like to use the David versus Goliath analogy,” Chang said. “They’re a really small company that accomplished really big things, and they did it to help achieve an important strategy for Microsoft – cross-platform gaming.”

“We think this type of game and service really does unite all of our platforms, and that can give us a more robust game portfolio than ever,” Chang said. “People look forward to taking their favorite games wherever they go.”

“I think as we look towards the future, more and more games will support this type of game play where players are always connected to their experience,” he said.