A protein associated with neuron damage in Alzheimer’s patients provides a superior scaffold for growing central nervous system cells in the lab. The findings could have clinical implications for producing neural implants and offers new insights on the complex link between the apoE4 apolipoprotein and Alzheimer’s disease. Results appear in the journal Biomaterials.

PROVIDENCE, R.I. [Brown University] — A protein associated with neuron damage in people with Alzheimer’s disease is surprisingly useful in promoting neuron growth in the lab, according to a new study by engineering researchers at Brown University. The findings, in press at the journal Biomaterials, suggest a better method of growing neurons outside the body that might then be implanted to treat people with neurodegenerative diseases.

The research compared the effects of two proteins that can be used as an artificial scaffold for growing neurons (nerve cells) from the central nervous system. The study found that central nervous system neurons from rats cultured in apolipoprotein E-4 (apoE4) grew better than neurons cultured in laminin, which had been considered the gold standard for growing mammalian neurons in the lab.

“Most scientists assumed that laminin was the best protein for growing CNS (central nervous system),” said Kwang-Min Kim, a biomedical engineering graduate student at Brown University and lead author of the study, “but we demonstrated that apoE4 has substantially better performance for mammalian CNS neurons.”

Kim performed the research under the direction of Tayhas Palmore, professor of engineering and medical science and Kim’s Ph.D. adviser. Also involved in the project was Janice Vicenty, an undergraduate from the University of Puerto Rico, who was working in the Palmore lab as a summer research fellow through the Leadership Alliance.

The results are surprising partly because of the association of apoE4 with Alzheimer’s. Apolipoproteins are responsible for distributing and depositing cholesterols and other lipids in the brain. They come in three varieties: apoE2, apoE3 and apoE4. People with the gene that produces apoE4 are at higher risk for amyloid plaques and neurofibrillary tangles, the hallmarks of Alzheimer’s. But exactly how the protein itself contributes to Alzheimer’s is not known.

This study suggests that outside the body, where the protein can be separated from the cholesterols it normally carries, apoE4 is actually beneficial in promoting neuron growth.

In the body, neurons grow in what’s called an extracellular matrix (ECM), a protein-rich scaffold that provides cells with nutrients and a molecular structure in which to grow. To grow neurons in the lab, scientists try to mimic the ECM present in the body. Laminin is a common protein in the body’s ECM, and studies have shown that laminin aids the growth of neurons from the peripheral nervous system (nerve cells that grow outside the brain and spinal cord).

Kim and his colleagues cultured rat hippocampal cells — a model for mammalian CNS neurons — in four different treatments: laminin, laminin and apoE4 mixed, apoE4 alone, and bare glass. They found that cells cultured in apoE4 alone performed substantially better than any other treatment. The apoE4 cells were more likely to adhere to the protein scaffold, which is necessary for proper growth. They also showed more robust growth of axons and dendrites, the wire-like appendages that enable neurons to send and receive nerve signals. 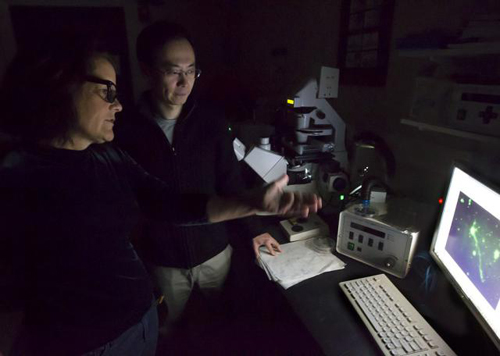 One size doesn’t fit all. Tayhas Palmore and Kwang-Min Kim showed that lamnin, the preferred scaffold for peripheral nerve cells, is not the best choice for culturing cells from the central nervous system. The protein apoE4 works much better. Image credit: Mike Cohea/Brown University

Laminin doesn’t seem to be of much benefit at all for culturing CNS cells, according to the study. Cells cultured on laminin alone did not perform any better than cells cultured on bare glass.

That was another big surprise, Kim said, because laminin is so widely used in all kinds of neuron cultures.

A second part of the research looked at the chemical pathways through which proteins may enhance neuron growth. Previous work had found two neuron receptors, the gateways through which neurons interact with the outside world, that play a role in how external proteins trigger cell growth. However, when Kim blocked these two receptors, known as integrin and HSPG, he found that apoE4 still enhanced neuron growth. That finding suggests that neurons use an as yet unknown pathway to interact with apoE4.

“This discovery opens up a new target for researchers who are interested in identifying receptors that are important for spurring neural growth,” Palmore said.

Unlike other cells in the body, nerve cells tend not to regenerate after being damaged by disease or trauma. So researchers hope that they can eventually implant lab-grown cells in the body to treat trauma or neurodegenerative diseases like Alzheimer’s.

“People are looking at all these different proteins to see if we can make a material — a scaffold — that to a neuron, looks and feels like their natural environment,” said Palmore. “The finding that apoE4 is a better protein to add to neural scaffolds is a good breakthrough because most people have been using laminin for the central nervous system models, which turns out to be less than optimal.”

The research was supported by the National Science Foundation (HRD-0548311) and the National Institutes of Health.