Surgical Treatment for Epilepsy Should Not be Viewed As a Last Resort, Study Shows

Yet among people who suffer from what’s known as medically intractable epilepsy, in which seizures are resistant to drugs, only a small fraction will seek surgery, seeing it only as a last resort. As a result, they continue to suffer seizures year after year. They can’t drive, they can’t work and they lose cognitive function as the years pass. Premature death is not uncommon.

But a multi-center study led by researchers at UCLA shows that for people suffering from intractable temporal lobe epilepsy, the most common form of intractable epilepsy, early surgical intervention followed by antiepileptic drugs stopped their seizures, improved their quality of life and helped them avoid decades of disability.

The report appears in the March 7 edition of the Journal of the American Medical Association. 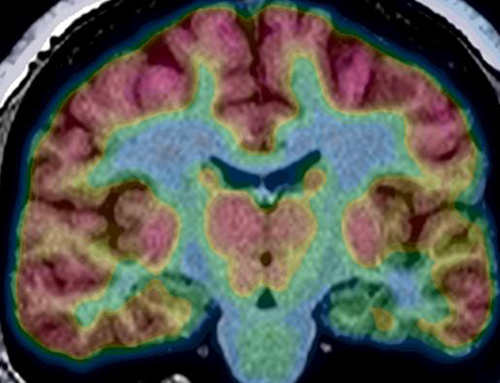 Epilepsy. A PET scan of a brain from a patient with epiepsy, between seizures. The red indicates healthy tissue. On the right side of the image, there is less red in the mesial temporal area. This is hypometabolism, reflecting decreased brain function in the area where seizures begin. Image credit: University of California

“In short, they got their lives back,” said Dr. Jerome Engel, the study’s principal investigator and director of the UCLA Seizure Disorder Center.

But the frustration of Engel and his colleagues is this: Few patients are referred to them for surgical evaluation, and those who are have had epilepsy for an average of 22 years.

“By then, it’s often too late,” he said. “These people will likely remain disabled for life.”

Epilepsy is a brain disorder that produces sudden and repeated seizures that last from a few seconds to several minutes. Seizures are brief attacks of altered consciousness, muscle control or sensory perception. During a seizure, some brain cells behave abnormally, firing repeatedly. This usually begins with a small group of cells and spreads to involve a larger area of the brain.

Epilepsy affects nearly 3 million Americans and 50 million people worldwide; the health burden caused by the disease is equivalent to that of lung cancer in men and breast cancer in women. In the U.S., the 30–40 percent of epilepsy patients who suffer from medically intractable epilepsy account for 80 percent of the cost of the disorder.

For the study, 16 epilepsy centers nationwide recruited 38 individuals suffering from mesial temporal lobe epilepsy that was determined to be intractable — that is, the patients were still having seizures after trying two different anti-epileptic drugs (the international definition of medical intractability). Those recruited had to be within two years of having their disease declared intractable. Of the study participants, 15 underwent surgery and 23 were assigned to a program of best medical care.

The researchers found that after two years, 85 percent of the participants who underwent surgery were seizure-free in the second year after the procedure; by comparison, none in the medical care group were seizure-free.

The surgical group also reported a significantly higher quality of life, a significant increase in independence, and an improved willingness and ability to socialize with friends and family. The number of individuals who reported being able to drive a car rose from 7 percent to 80 percent in the surgical group at the end of two years. Cognitive problems such as memory loss were similar between both groups.

“The results of this study are very encouraging,” said Engel, who holds the Jonathan Sinay Chair in Epilepsy at UCLA. “Surgical treatment for temporal lobe epilepsy soon after the failure of two trials of anti-epileptic drugs stops seizures and improves quality of life. Continuing anti-epileptic drug treatment alone does not.

“So the message is clear: Early surgery, before the adverse social and psychological consequences of seizures become irreversible, offers the best opportunity to avoid a lifetime of disability.”

“This study shows that early surgical intervention works, it stops seizures and it improves quality of life,” said Dr. Karl Kieburtz, director of the Center for Human Experimental Therapeutics at the University of Rochester Medical Center, which served as the coordinating center for the study. “Individuals with epilepsy that is not controlled with medicine should be evaluated for surgical intervention at a comprehensive epilepsy center — not after decades of poor response to medicine but within two years. And if they are a surgical candidate, they should give strong consideration to that approach.”

The results were statistically significant, even though the study was terminated early due to slow enrollment. The study originally was intended to follow 200 patients, but only 38 ultimately were recruited. While some patients who were referred did not meet the study’s criteria, the major problem was a lack of referrals, researchers said. Engel is not sure why.

“Partly, it has to do with the larger number of available anti-epileptic drugs, so neurologists in the community will try more combinations of medications,” he said. “Also, there are many misconceptions about surgical criteria that prevent the referral of good candidates. If patients have intractable seizures, they should be given the opportunity to be evaluated at an epilepsy center. But the biggest reason is fear — that’s often cited by patients and their physicians as a reason for continuing drug therapy. They see surgery as a last resort. And this study shows that that’s just wrong.”

Other authors of the study included John Stern, Itzhak Fried, Sandra Dewar and Harry Vinters, of UCLA; Michael P. McDermott, John Langfitt, Giuseppe Erba and Irenita Gardiner, of the University of Rochester Medical Center; Michael Sperling and Scott Mintzer, of Jefferson University; Samuel Wiebe, of the University of Calgary; and Margaret Jacobs, of the National Institute of Neurological Disorders and Stroke.

The study was funded by the National Institute of Neurological Disorders and Stroke. The authors report no conflict of interest.