EAST LANSING, Mich. — A Michigan State University anthropologist who spent more than a year infiltrating the black market for human kidneys has published the first in-depth study describing the often horrific experiences of poor people who were victims of organ trafficking.

Monir Moniruzzaman interviewed 33 kidney sellers in his native Bangladesh and found they typically didn’t get the money they were promised and were plagued with serious health problems that prevented them from working, shame and depression. 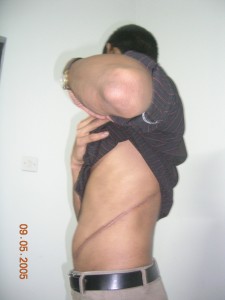 A Bangladeshi man shows the scar he received after selling one of his kidneys. This photo was taken in 2005 by MSU anthropologist Monir Moniruzzaman

The study, which appears in Medical Anthropology Quarterly, and Moniruzzaman’s decade-long research in the field describe a growing worldwide market for body parts that include kidneys, parts of livers and even corneas.

Moniruzzaman said the people selling their organs are exploited by unethical brokers and recipients who are often Bangladeshi-born foreign nationals living in places such as the United States, Europe and the Middle East. Because organ-selling is illegal, the brokers forge documents indicating the recipient and seller are related and claim the act is a family donation.

Doctors, hospital officials and drug companies turn a blind eye to the illicit act because they profit along with the broker and, of course, the recipient, said Moniruzzaman, who questioned many of the people involved.

Most of the 33 Bangladeshi sellers in his study had a kidney removed across the border in India. Generally, the poor seller and the wealthy recipient met at a medical facility and the transplant was performed at that time, he said.

“This is a serious form of exploitation of impoverished people, whose bodily organs become market commodities to prolong the lives of the wealthy few,” said Moniruzzaman, assistant professor in the Department of Anthropology and the Center for Ethics and Humanities in the Life Sciences.

Moniruzzaman recently delivered his research findings and recommendations on human organ trafficking to both the Tom Lantos Human Rights Commission of the U.S. Congress and the U.S. Senate Committee on Foreign Relations. 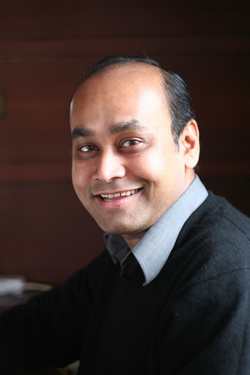 Monir Moniruzzaman, assistant professor in the Department of Anthropology and the Center for Ethics and Humanities in the Life Sciences. Image credit: Michigan State University

His briefing included the experiences of Mehedi Hasan, a 23-year-old rickshaw puller who sold part of his liver to a wealthy recipient in the Bangladesh capital of Dhaka. Like many poor Third World residents, Hasan did not know what a liver was. The broker exploited this fact and told Hasan the sale would make him rich.

The recipient died soon after the transplant. Hasan received only part of the money he was promised and is now too sick to work, walk long distances or even breathe properly. He thinks often of killing himself, Moniruzzaman said.

Organ brokers typically snag the unwitting sellers through deceptive advertisements. One ad, in a Bangladeshi newspaper, falsely promised to reward a kidney seller with a visa to the United States. Moniruzzaman collected more than 1,200 similar newspaper ads for the study; see two examples here.

The organ trade is thriving in Bangladesh, a country where 78 percent of residents live on less than $2 a day. The average quoted price of a kidney is 100,000 taka ($1,400) – a figure that has gradually dropped due to an abundant supply from the poor majority, Moniruzzaman said.

One Bangladeshi woman advertised to sell a cornea so she could feed her family, saying she needed only one eye to see. That transplant didn’t happen, but Moniruzzaman said there have been cases of corneas being sold.

Moniruzzaman said it’s important to note that most sellers do not make “autonomous choices” to sell their organs, but instead are manipulated and coerced. He said the global trade of organs is a fairly recent phenomenon – made possible by advances in medical technology in the past 30 years – that represents a form of gross exploitation unseen in human history.

To combat organ trafficking, he recommends, among other steps:

“But with our collaborative efforts,” he said, “we can significantly reduce this gross violation of human rights.”