A fundamental shift in the Indian monsoon has occurred over the last few millennia, from a steady humid monsoon that favored lush vegetation to extended periods of drought, reports a new study led by researchers at the Woods Hole Oceanographic Institution (WHOI). The study has implications for our understanding of the monsoon’s response to climate change.

The Indian peninsula sustains over a billion people, yet it lies at the same latitude as the Sahara Desert. Without a monsoon, most of India would be dry and uninhabitable. The ability to predict the timing and amount of the next year’s monsoon is vital, yet even our knowledge of the monsoon’s past variability remains incomplete.

One key to this understanding lies in the core monsoon zone (CMZ) – a region in the central part of India that is a very sensitive indicator of the monsoon throughout the India peninsula.

“If you know what’s happening there, you know more or less what’s happening in the rest of India,” said Camilo Ponton, a student in the MIT-WHOI Joint Program in Oceanography and lead author of the study recently published in Geophysical Research Letters, Holocene Aridification of India. “Our biggest problem has been a lack of evidence from this region to extend the short, existing records.” 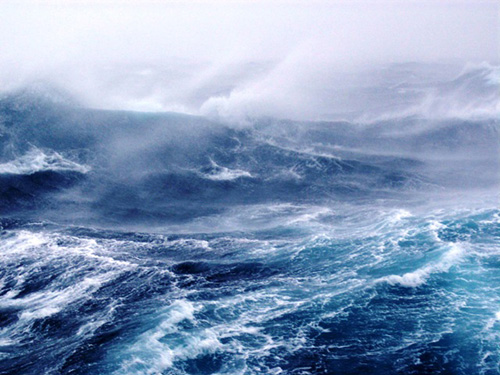 A cyclone strikes the Bay of Bengal during a research cruise aboard the JOIDES Resolution in the summer of 2006. Without a monsoon, most of India would be dry and uninhabitable. The ability to predict the timing and amount of the next year’s monsoon is vital to the more than one billion people sustained by it. (Photo by Liviu Giosan, Woods Hole Oceanographic Institution)

The study was designed by WHOI geologist Liviu Giosan and geochemist Tim Eglinton, now at ETH in Zurich, and makes use of a sediment core collected by the National Gas Hydrate Program of India in 2006. Sailing around India aboard the drilling vessel JOIDES Resolution for several months, Giosan enlisted colleagues from India and US to help with the project. Extracted from a “sweet spot” in the Bay of Bengal where the Godavari River drains the central Indian peninsula and over which monsoon winds carry most of the precipitation, the core has provided the basis for a 10,000-year reconstruction of climate in the Indian peninsula’s CMZ .

“We are fortunate to have this core from close to the river mouth, where it accumulates sediment very fast,” said Ponton. “Every centimeter of sediment contains 10 to 20 years’ worth of information. So it gives us the advantage of high temporal resolution to address the problems.”

When put together, the research tells the story of growing aridity in India, enables valuable insights into the impact of the monsoon on past cultures, and points scientists toward a way to model future monsoons. 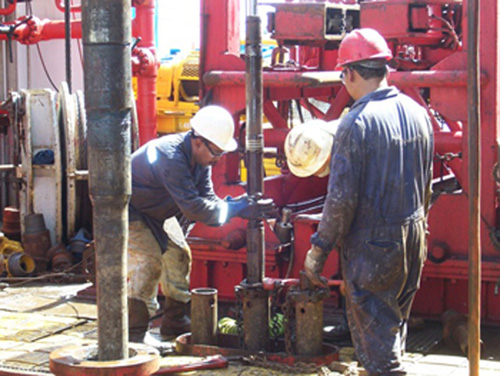 A sediment core is collected in the Bay of Bengal by the National Gas Hydrate Program of India in 2006 aboard the drilling vessel JOIDES Resolution. Extracted from a “sweet spot” in the Bay of Bengal where the Godavari River drains the central Indian peninsula and over which monsoon winds carry most of the precipitation, the core has provided the basis for a 10,000-year reconstruction of climate in the Indian peninsula’s "core monsoon zone." (Photo by Liviu Giosan, Woods Hole Oceanographic Institution)

To assemble the 10,000-year record, the team looked to both what the land and the ocean could tell them. Contained within the sediment core’s layers are microscopic compounds from the trees, grasses, and shrubs that lived in the region and remnants of plankton fossils from the ocean.

“The geochemical analyses of the leaf waxes tell a simple story,” said Giosan. “About 10,000 years ago to about 4500 ago, the Godavari River drained mostly terrain that had humidity-loving plants. Stepwise changes starting at around 4,000 years ago and again after 1,700 years ago changed the flora toward aridity-adapted plants. That tells us that central India – the core monsoon zone – became drier.”

Analyses of the plankton fossils support the story reconstructed from plant remains and reveal a record of unprecedented spikes and troughs in the Bay of Bengal’s salinity – becoming saltier during drought periods and fresher when water from the monsoon filled the river and rained into the Bay. Similar drought periods have been documented in shorter records from tree rings and cave stalagmites within India lending further support to this interpretation. 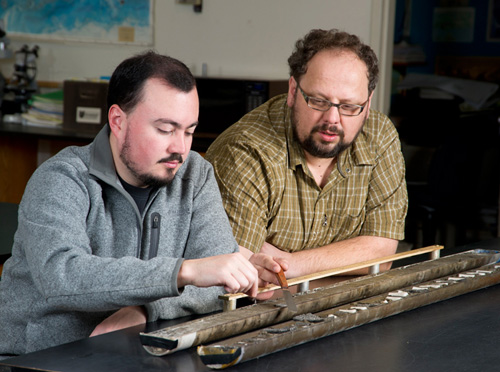 Camilo Ponton, a student in the MIT-WHOI Joint Program in Oceanography, examines a sediment core from the Bay of Bengal with his WHOI advisor, geologist Liviu Giosan. (Photo by Tom Kleindinst, Woods Hole Oceanographic Institution)

With a picture emerging of changes in the ancient flora of India, Giosan tapped archaeobotanist Dorian Fuller’s interest.

“What the new paleo-climatic information makes clear is that the shift towards more arid conditions around 4,000 years ago corresponds to the time when agricultural populations expanded and settled village life began,” says Fuller of the Institute of Archaeology, University College London. “Arid-adapted food production is an old cultural tradition in the region, with cultivation of drought-tolerant millets and soil-restoring bean species. There may be lessons to learn here, as these drought-tolerant agricultural traditions have eroded over the past century, with shift towards more water and chemical intensive forms of modern agriculture.”

Together, the geological record and the archaeological evidence tell a story of the possible fate of India’s earliest civilizations. Cultural changes occurred across the Indian subcontinent as the climate became more arid after ~4,000 years. In the already dry Indus basin, the urban Harappan civilization failed to adapt to even harsher conditions and slowly collapsed. But aridity favored an increase in sophistication in the central and south India where tropical forest decreased in extent and people began to settle and do more agriculture. Human resourcefulness proved again crucial in the rapid proliferation of rain-collecting water tanks across the Indian peninsula, just as the long series of droughts settled in over the last 1,700 years.

What can this record tell us about future Indian monsoons? According to Ponton, “How the monsoon will behave in the future is highly controversial. Our research provides clues for modeling and that could help determine whether the monsoon will increase or decrease with global warming.”

The study found that the type of monsoon and its droughts are a function of the Northern Hemisphere’s incoming solar radiation – or “insolation.” Every year, the band of heavy rain known as the Inter-Tropical Convergence Zone, or ITCZ, moves north over India.

“We found that when the Asian continent is least heated by the sun, the northward movement of the rain appears to hesitate between the Equator and Asia, bringing less rain to the north,” said Giosan. “The fact that long droughts have not occurred over the last 100 years or so, as humans started to heat up the planet, but did occur earlier, suggest that we changed the entire monsoon game, and may have inadvertently made it more stable!”