The virtual network streaming vacation pictures and emails to grandma and grandpa also transmits messages between terrorists who want to attack the United States, according to the former chief executive of two of the most powerful and secretive American intelligence agencies.

Gen. Michael Hayden, former director of the National Security Agency and later director of the Central Intelligence Agency, addressed a large audience for the Global Agenda speaker series Wednesday night in Mitchell Hall, offering the crowd a glimpse into the complex intelligence industry.

Hayden said the NSA, the signals intelligence agency for the United States, faced amplified difficulty in intercepting electronic communication with the emergence of the Internet, as fiber optic cable transported telecommunications from the air to deep in the ground.

The modern Internet also blended electronic communication among the global population into one entity, making it near impossible, Hayden said, to capture correspondence between terrorists without also catching some personal interaction between private American citizens.

And an increase in computer network exploitation—essentially spying, Hayden said—is not exclusively conducted by the United States. 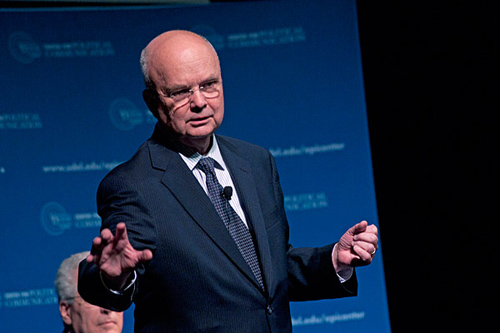 Gen. Michael Hayden, former director of the NSA and CIA, discussed the complexity of signals intelligence during a Global Agenda talk Wednesday. Photo by Duane Perry

Hayden also addressed the emergence of cyber technology as a component in sophisticated weaponry, referring specifically to the computer worm Stuxnet and its destruction of Iranian nuclear centrifuges.

He likened this new era of computer weapons to August of 1945 and the emergence of the atomic bomb.

“A new class of weapon has just been used to create physical destruction,” Hayden said.

With the ever-changing technology comes pressure to constantly keep up with the latest digital advancements and serious consequences should the agency fall behind, Hayden said. He and the NSA faced the consequences of weak communications technology in January 2000, only 10 months after Hayden became the director of the agency.

For roughly 96 hours, the agency was in a blackout, and America “was not reading anybody’s mail,” Hayden said. The technology continued to collect all of the intelligence signals, but personnel could not access them for days.

Less than two years later, Hayden and the NSA were challenged again as America suffered the attacks of Sept. 11. Hayden was in his NSA office at Fort Meade that morning, and he said almost immediately intelligence teams were picking up chatter from al-Qaeda.

Once the agency realized the attacks were not an accident but something far graver, Hayden said all non-essential personnel were sent home, though roughly 7,000 people continued working.

He said as dusk fell that day, and the counterterrorism unit began to put up blackout curtains to hide their location as they worked into the night, he knew change stood on the horizon for American surveillance.

“We began to shift our weight inside the NSA,” Hayden said. 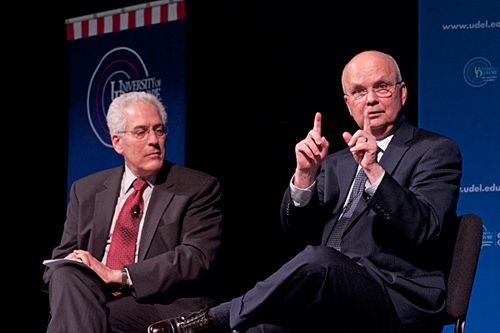 Changes, Hayden said, included increased focus on “metadata,” such as the geo-location of communication signals and investigation of the parties on either end, rather than simply deciphering the content of the communication.

Hayden said the interconnectedness of the Internet intensifies the tension between security and liberty, forcing the agency to strike a balance in order to both protect citizens and preserve their constitutional freedoms. While Americans were previously able to favor liberty, Hayden said post-9/11 threats have tipped the balance closer to security.

These threats have not stopped the country from placing valuable information in the virtual medium, and as information flow through the Internet increases, Hayden said the United States has become more vulnerable than most.

“We have so much to lose compared to everyone else,” Hayden said.

The series will continue Wednesday, March 21, with a presentation “HUManINTelligence in the Digital Age,” with Robert Grenier, who served 27 years in the CIA, most recently as head of its Counterterrorism Center. Among previous assignments, he led agent training at “The Farm,” was CIA representative to the White House on Iraq during the 2003 invasion, and, as CIA station chief in Islamabad, Pakistan, directed operations against the Taliban before, during and after the 9/11 attacks.