A chemical analysis of oil sheens found floating recently at the ocean’s surface near the site of the Deepwater Horizon disaster indicates that the source is pockets of oil trapped within the wreckage of the sunken rig. Both the Macondo well and natural oil seeps common to the Gulf of Mexico were confidently ruled out.

Researchers from Woods Hole Oceanographic Institution (WHOI) and the University of California, Santa Barbara (UCSB) used a recently-patented method to fingerprint the chemical makeup of the sheens and to estimate the location of the source based on the extent to which gasoline-like compounds evaporated from the oil sheens. The study was published online in Environmental Science & Technology.

The oil sheens were first reported to the United States Coast Guard by BP in mid-September 2012, raising public concern that the Macondo well, which was capped in July 2010, might be leaking.

“It was important to determine where the oil was coming from because of the environmental and legal concerns around these sheens. First, the public needed to be certain the leak was not coming from the Macondo well, but beyond that we needed to know the source of these sheens and how much oil is supplying them so we could define the magnitude of the problem,” said WHOI chemist Chris Reddy. 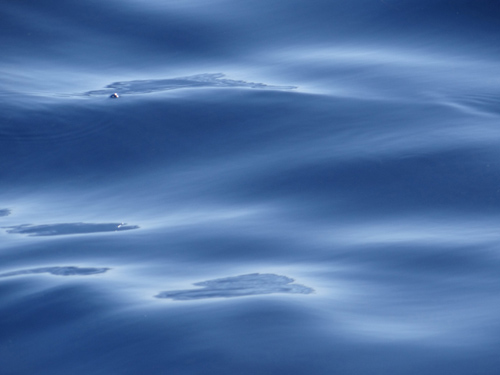 Surface sheen seen in October 2012 near the site of the Deepwater Horizon disaster. The oil has “dampened” the sea surface, smoothing its surface expression. The research team looked for these dampened areas rather than the sheens themselves as sunlight made the sheens difficult to see at boat level. (Photo by Chris Reddy, Woods Hole Oceanographic Institution)

When oil sheens appear on the ocean surface, how do researchers determine where the oil is coming from? Every oil sample contains chemical clues pointing to the reservoir it came from, allowing scientists to compare it to other samples to determine if they share a common source. The lead scientists Chris Reddy (WHOI) and Dave Valentine (UCSB) were aptly prepared to investigate these sheens. They have worked on the Deepwater Horizon for much of the last three years, investigating a wide range of problems from the composition of the oil, detection of subsurface plumes, the biodegradation of the oil, the fate of the dispersants, and the chemical transition from floating oil slicks to sunken tar balls.

“Because of our ongoing funding from the National Science Foundation, we were prepared to interrogate the source of mysterious oil sheens in the Gulf of Mexico,” said Valentine. “We’ve been exploring new ways to do this for several years in the context of natural seeps and this event provided us an opportunity to apply our fundamental advances to a real-world problem. This is a classic case where fundamental science finds a real world application.”

This research analyzed 14 sheen samples they skimmed from the sea surface during two trips to the Gulf of Mexico. Using comprehensive two-dimensional gas chromatography (GCxGC), a technique developed in Reddy’s lab, the researchers first confirmed the sheens contained oil from the Macondo well. But the sheen samples also contained trace amounts of “olefins”—industrial chemicals that are used in drilling operations—compounds that were absent from the sample taken directly from the Macondo well. The presence of “olefins” provided a fingerprint for the sheens that the authors could compare to the library of samples they had analyzed over the past three years. 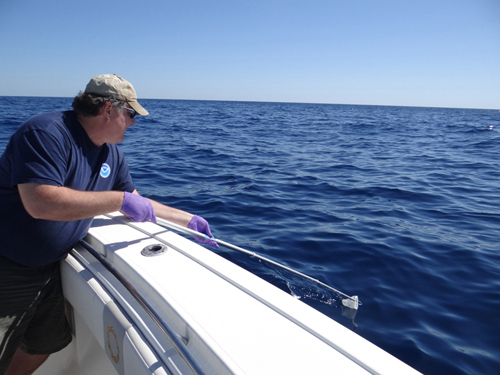 During an expedition in October 2012, WHOI research specialist Bob Nelson sampled the sheens using a telescoping rod to pass a Teflon screen through the top few inches of the sea surface. (Photo by Chris Reddy, Woods Hole Oceanographic Institution)

The “olefins” are not found in crude oil and their uniform distribution in the sheens indicated that the Macondo well was unlikely to be the source. The team surmised that the sheens must be coming from equipment exposed to olefins during drilling operations. Reddy’s lab holds a patent on measuring olefins in crude oils.

“The occurrence of these man-made olefins in all of our sheen samples points to a single main source which contains both Macondo oil and lesser amounts of the drilling fluids that harbor the olefins,” said Valentine. “This pointed us to the wreckage of the rig, which was known to have both, as the most likely source for the sheens.”

It also meant the olefins could be used by the team as a fingerprint in the search for the source of the leak.

The research team compared the sheen samples to other field samples, some of which they expected would contain olefins and some they thought would not. The reference samples included two pieces of debris from the Deepwater Horizon, found floating in early May 2010, as well as oil collected by BP in October 2012 during an inspection of the 80-ton cofferdam that had been abandoned at the sea floor after its use in a failed attempt to cover the Macondo well in 2010. 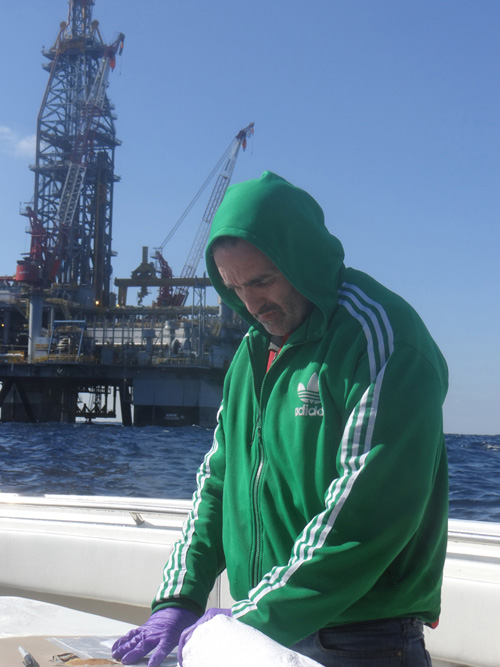 The research team’s second sampling expedition in December 2012, was more challenging due to the close proximity of a BP survey vessel, Olympic Triton, which was operating two ROVs, and a mobile offshore deep drilling unit. The rig and vessel each require a reasonable stand-off distance for safety precautions. WHOI’s Chris Reddy is shown here, with the drilling rig behind him. (Photo by Bob Nelson, Woods Hole Oceanographic Institution)

The team’s GCxGC analysis of BP’s cofferdam samples definitively showed the cofferdam was not the sole source of the leak – there were no olefins present. Prior to the analysis, the cofferdam had become the prime suspect as the source when BP found small amounts of oil leaking from the top of the cofferdam. BP acquired oil samples from this leak point before sealing the leak, thinking they had resolved the problem. However, the sheens on the sea surface persisted, and the lack of olefins pointed to another source entirely.

When Reddy and Valentine compared the chemical makeup of the sheens with Deepwater Horizon debris found floating in 2010, they found a match. That debris, which came from the rig itself, was coated with oil and contaminated with drilling mud olefins.

”The ability to fingerprint synthetic hydrocarbons allowed us to crack this case. We were able to exclude a number of suspects and match the olefin fingerprint in the new oil slicks to that of the wreckage from the sunken rig,” said Valentine. 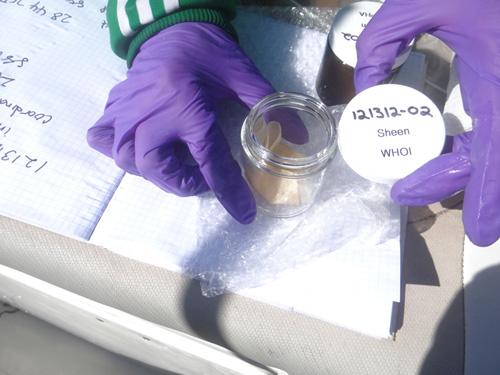 After retrieving the oil-coated screens, each screen was sectioned into several pieces for various analyses. Some were reserved for DNA extraction; others analyzed for drilling fluids and shared with the National Oceanic Atmospheric Administration for standard petrochemical analyses. (Photo by David Valentine, University of California, Santa Barbara)

The chemical analysis also told researchers which sheens had surfaced more recently than others, allowing them to reconstruct a trajectory for local ocean currents that pointed back to the source of the oil. By looking for sheens that showed the least amount of evaporation, they determined that oil surfaced closer to the Deepwater Horizon wreckage than the cofferdam site.

To explain how the oil might be trapped and released from the wreckage, the scientists point out that when the Deepwater Horizon rig sank, it was holding tanks containing hundreds of barrels of a mixture of drilling mud and oil. Over time, corrosive seawater can create small holes for oil to slowly escape to the surface. The researchers suspect that the containers on the Deepwater Horizon rig holding entrapped oil may be the source of the recent oil sheen.

“This study shows that drilling mud olefins are a powerful forensic tool to investigate the source of oil sheens,” the authors wrote.

In the process of their research, Reddy and Valentine operated with transparency, alerting the government and BP to their research plans. They believe this fostered a collegial relationship that ultimately improved their research. Throughout the effort to find the source of the oil, there was keen interest in the research both by BP and federal agencies; all stakeholders sought to determine the source of the oil, though each required a different level of certainty about the results, and each had different questions to answer. Reddy and Valentine required great certainty in their results before publishing them, but recognized that their preliminary data could be useful to others who could use it to take immediate action with less certainty.

“We had a fruitful exchange and developed a collegial relationship with both BP and the government. Both provided us with data, and in turn we gave them a preview of our findings with no strings attached,” said Valentine.

At the end of the day, Reddy said, “This is a good study, but the long lasting impacts of this effort were highlighting that academia can play a useful role during a crisis. We can be unbiased and collaborative without losing our integrity. What is lost on many of our colleagues is that interacting with representatives of the government and BP provided advice and input that improved our research. This is a win-win.” 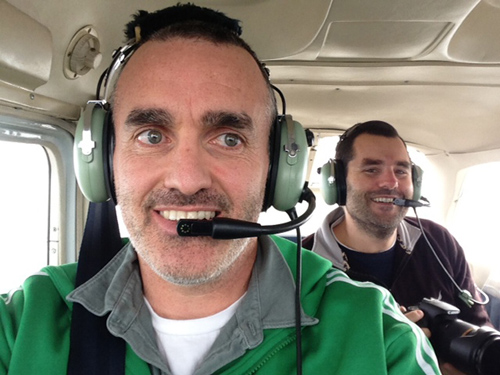