A study from North Carolina State University shows how people used Twitter following the 2011 nuclear disaster in Japan, highlighting challenges for using the social media tool to share information. The study also indicates that social media haven’t changed what we communicate so much as how quickly we can disseminate it.

“I wanted to see if Twitter was an effective tool for sharing meaningful information about nuclear risk in the wake of the disaster at the Fukushima Daiichi nuclear plant,” says Dr. Andrew Binder, an assistant professor of communication at NC State and author of a paper describing the work. “I knew people would be sharing information, but I wanted to see whether it was anecdotal or substantive, and whether users were providing analysis and placing information in context.

“In the bigger picture, I wanted to see whether social media is changing the way we communicate, or if we are communicating the same way using different tools.” 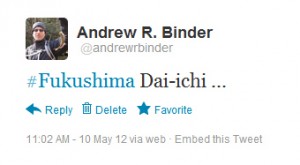 Binder searched for Twitter posts, or “tweets,” originating in the United States that specifically referenced “Fukushima Daiichi” – which is the name of the nuclear plant – rather than searching for the term “Fukushima.” This allowed him to target tweets about the plant instead of general references to the tsunami and overarching disaster in the region. Using that as a base, Binder then selected every 20th tweet on each day over the two weeks following the onset of the Fukushima disaster – from March 11 to March 25, 2011 – to create a representative sample of these tweets.

“I found that, initially, tweets that mentioned risk were unlikely to include analysis or information on context,” Binder says. “Similarly, tweets that attempted to help understand events at Fukushima Daiichi rarely mentioned risk. By the time people began tweeting about risk issues in a meaningful way, the initial high level of interest had begun to wane significantly.”

Binder also found that people were more likely to include links to websites as time went on. And, as time passed, a higher percentage of those links were to traditional news sites.

“This highlights a significant problem,” Binder says. “People are clearly looking to news outlets for insight and analysis into disasters such as this one. But news organizations have fewer and fewer reporters who specialize in covering science and technology issues – and those are the very reporters who would be able to provide insight and analysis on these events.”

The study also seems to imply that social media have not significantly changed the content of our communications. “This case, at least, indicates that Twitter is allowing people to share news quickly and easily,” Binder says. “But the news they are sharing is not much different from that available to someone reading a print newspaper – they’re simply getting it sooner.”

The paper, “Figuring Out #Fukushima: An Initial Look at Functions and Content of US Twitter Commentary About Nuclear Risk,” will be published in the June issue of Environmental Communication.