In order to accurately identify skulls as male or female, forensic anthropologists need to have a good understanding of how the characteristics of male and female skulls differ between populations. A new study from North Carolina State University shows that these differences can be significant, even between populations that are geographically close to one another. 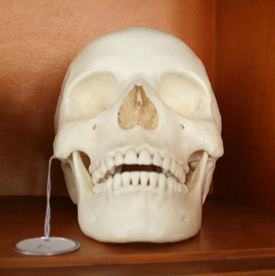 Specifically, the researchers found that the female skulls from Lisbon exhibited greater intraorbital distance than the skulls of Coimbra females. In other words, the women from Lisbon had broader noses and eyes that were spaced further apart.

This difference in craniofacial characteristics may stem from an influx of immigrants into Lisbon, which is a port city, Ross says. However, it may also be a result of preferential mate selection – meaning Lisbon men were finding mates abroad, or were more attracted to women with those facial features.

“Finding this level of dimorphism between groups in such close proximity to each other highlights the importance of examining human variation if we hope to make informed assessments of skeletal remains,” Ross says. “That’s true whether you’re working in a biohistorical context or engaged in forensic analysis with law enforcement.”

The paper, “Craniofacial Sexual Dimorphism in Two Portuguese Skeletal Samples,” is forthcoming in the journal Anthropologie. The lead author is Ashley Humphries, who received her master’s degree at NC State and is now in the Ph.D. program at the University of South Florida. The research was supported by the National Institute of Justice.