The brain’s ability to learn to recognize objects plays out in the inferior temporal cortex. A new study offers a possible explanation of how two classes of neurons play distinct roles to help that happen.

PROVIDENCE, R.I. [Brown University] — No matter what novel objects we come to behold, our brains effortlessly take us from an initial “What’s that?” to “Oh, that old thing” after a few casual encounters. In research that helps shed light on the malleability of this recognition process, Brown University neuroscientists have teased apart the potentially different roles that two distinct cell types may play.

In a study published online in advance in the journal Neuron, the researchers document that this kind of learning is based in the inferior temporal cortex (ITC), a brain area buried deep in the skull. Scientists already knew the area was important for visual recognition of familiar items, but they hadn’t figured out the steps required to move from novelty to familiarity, a process they refer to as “plasticity.”

“We know little about that because of the level at which this plasticity is taking place,” said senior author David Sheinberg, professor of neuroscience and a member of the Brown Institute for Brain Science. “The inner workings made up of individual neurons make it very hard to actually track what’s going on at that level.”

Working with two monkeys, in whom they monitored single neuron activity using tiny microelectrodes, Sheinberg and graduate student Luke Woloszyn tracked the firing patterns of individual neurons in the ITC while monkeys viewed 125 objects they had been trained to recognize and 125 others that they had never seen before.

The scientists found that the two major classes of cells found in the brain, excitatory and inhibitory, responded differently depending on what the monkeys saw. Excitatory neurons were especially active when the monkeys saw a preferred familiar object — the familiar image, out of the 125 such images, that the cell “liked” best. Although the particular preferred familiar image varied across the sample of neurons, almost every excitatory cell had at least one familiar image to which it responded more robustly than its preferred novel image, Sheinberg said. Inhibitory neurons, meanwhile, were much more active when the monkeys saw any novel image, independent of the object’s actual identity. 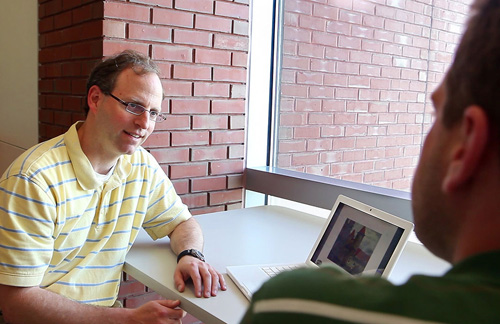 Woloszyn and Sheinberg were able to distinguish between the neuron classes by the shapes of the voltage changes picked up by the microelectrodes. Excitatory neurons had characteristically broad spikes, while inhibitory neurons had narrower spikes.

Not only did the researchers see differences in what made the neurons respond, but also in when they did so. Excitatory neurons peaked in activity within 100 milliseconds to their preferred familiar objects, for example, while inhibitory neurons responded to a broad set of novel objects over a wider timeframe of up to 325 milliseconds.

Sheinberg speculated that the different roles of the cells and the specific timing of their responses might be explained by the following interplay: When the monkey sees something familiar (banana!), excitatory neurons fire to signal recognition, sending that signal to other parts of the brain to drive the appropriate behavioral response. But when the monkey sees something unfamiliar (stapler?), the excitatory response is more diffuse, permitting the inhibitory neurons to maintain their elevated activity, which in turn signals a learning event.

“When a familiar object has been recognized, that’s a positive signal and that can cause the system to move on,” Sheinberg said. “In the absence of that signal, that means the object isn’t familiar. What we think is going on is that the ongoing inhibitory activity actually promotes a learning process. It can be a signal to learn.”

Another finding is the possible manifestation of that learning. Sheinberg and Woloszyn found considerable significance in their observation that individual excitatory neurons would modulate their firing rate only in response to a few of the images the monkeys saw. This “sparseness” of firing is a measure of the neuron’s specialized attention to just a few images.

“What really drove me and Luke along the way was this question of whether … through repeated exposure, neurons really do specialize in a marked way,” Sheinberg said. “The effect of the learning was surprising to me.”

They further speculate that the specialization is originally driven by the inhibitory cells.

“We thus propose that the increased activity of our putative inhibitory cells is the neurochemical trigger for the robust selectivity changes within the excitatory population,” Sheinberg and Woloszyn wrote in the journal.

The study ties into a separate effort at Brown, Stanford, and other institutions in which a team of scientists is striving to lay the basic science groundwork for ultimately treating people who have suffered traumatic brain injury.

“There is a huge diversity [of neurons] and this diversity could be very important because in the case where you need to repair circuits — say you’ve had a stroke, and you want to retrain that area — it may be that certain cell classes need to be functional in order to support that plasticity,” he said. “We’re only beginning to appreciate the interplay between these cell types that might support learning and reorganization.”