The past few months have seen a spate of solar flares – bringing spectacular views of the northern lights as far south as Seattle – along with media speculation that the electrical activity could disrupt power grids, satellites or ground airplanes.

John Sahr, a UW professor of electrical engineering who studies the upper atmosphere, is the regional go-to guy for such questions. We found some time in Sahr’s busy schedule (he’s also the UW’s associate dean of undergraduate academic affairs and a part-time zombie hunter) to get his read on the space weather forecast.

Q: Can you describe what we’ve been seeing in the last few months?

Well, let’s start with the sun. The sun has an 11-year cycle of times when it’s more busy and less busy, more stormy and less stormy. For the past five years the sun has been pretty quiet. We’re now rising up into the next solar maximum, which will last for about five years.

When the sun is stormy, there are more solar flares and more of what are called coronal mass ejections, which are basically just big puffs of electrically charged gas that burst out of the sun.

When this solar wind is gusty, it rattles the magnetic field around the Earth. That drives electric currents up and down along the Earth’s magnetic field lines. When those currents run into the Earth’s upper atmosphere, at altitudes of about 60 to maybe two- or three-hundred miles, they collide with the ionosphere and release energy in the form of light, causing the visual displays that we know of as the aurora.

Q: Why do we see these dramatic arcing displays?

The solar wind is a pretty good conductor, so it stretches the Earth’s magnetic field downwind, and it wiggles and moves. To know what’s happening during a solar storm, go over to the UW’s Red Square and look at the flagpole. When there’s a big stiff wind you hear it snapping and popping. That mechanical energy is the source, ultimately, for the northern lights. The Earth acts like a flagpole and the magnetosphere drapes past it, like the flag around the flagpole. 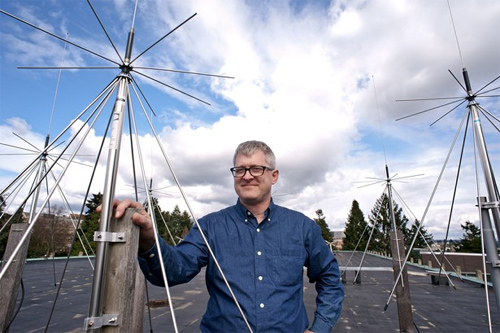 Q: Can we see predict solar activity and northern lights?

We can, to some extent. If you look at the sun through a telescope, the part of the sun that’s right in the center is roughly the part that’s throwing gas at you. If there’s a solar flare or sunspot that’s more out toward the edge of the sun, we’ll see that it happened, but the gas won’t hit the Earth.

When there’s a solar flare, the light gets here in eight minutes, but the coronal mass ejection gets here typically about two or two-and-a-half days later.

The other predictability has to do with the fact that the sun rotates every 30 days or so. So if you got hit with a bunch of solar wind from a particular sunspot, if the sunspot’s still there when the sun has rotated around, there’s a greater likelihood that we’ll get a burst of solar wind a month later.

And then, finally, there’s the 11-year cycle. We’re not surprised that we’re getting more magnetic storms now than we were for the past four or five years.

Q: Reporters often ask you to talk about solar activity. What do you think about the public’s reaction to solar storms?

Well, it comes up that there’s a solar storm, and sooner or later I’ll get the phone calls. And there’s always this hype about: “Whoa, it’s a really big magnetic storm, and what’s that gonna do?” And the answer is: “Well, people probably won’t notice.”

It used to be a more significant effect on the power grid, because the currents that flow in the upper atmosphere can disturb the power system by driving big currents through the transformers along transmission lines. But the power companies know how to modify their system so that it’s much more robust to those great big surges.

Airlines that are flying over the poles will change their routes to be more southerly to reduce the energetic particle exposure, for the crews and passengers. By and large, we actually know how to respond to these things very well.

Probably the most significant impact of really big solar flares is the exposure of satellites. Satellites have to be designed with X-ray exposure in mind. One way is to have the satellites be within the Earth’s magnetosphere, but there are some that manage to be outside the Earth’s magnetosphere. One of the things that makes GPS a relatively reliable technology is that everybody wants it so badly, and there are now three or four different GPS-like systems. There’s the U.S. GPS one, there’s the Russian GLONASS, there’s a European system. These systems work about the same, and they’re constantly launching new satellites. They actually park spare satellites in orbit just to make sure the service keeps working. So I think [satellite] is something people can safely rely upon.

A little longer point of view, it’s important to remember that when we have people in orbit, these magnetic storms are really providing extra energetic particles and more X-ray exposure. As we begin to think about doing things like traveling to Mars, one of the things for people to remember is that those spacecraft will probably have to travel during a sunspot minimum, just to keep the radiation exposure of the astronauts to a minimum.

Q: What can we expect to see over the next few months?

We expect the actual peak in the sunspot cycle to be somewhere between about a year and two years from now. So what we’ve been seeing for the past several days or weeks will be typical for the next three or four years. The prediction is that this sunspot cycle will actually be somewhat less intense than the last one, which peaked in 2000 and was very active all the way through 2004.

This particular sunspot cycle is interesting because the depth of the minimum was remarkably deep, and the time since the last solar max is closer to 14 years, so this has been a bit of an unusual solar cycle.

Q: Where do you recommend going in Seattle to see the northern lights?

The Northern Lights can happen any time of day, but of course you need a pretty dark sky to actually see them. What I always advise is anytime they fly across the nation at night, to get a window seat on the north side of the plane. I’ve seen great aurora that way.

You really just need a dark sky and a view to the north. I’ve seen them from my front porch. There’s something called the k-p index, which is kind of the Richter scale for the upper atmosphere. If it’s evening, and the k-p index is greater than 7, you should go look.

Q: How are solar storms related to your research?

Solar storms generate a sonic boom, which is very loud sound waves in the plasma that scatter radio waves, at an altitude of about 60 miles. We can study this phenomenon directly with our radar. You can think of it as when the ionosphere is smooth, it’s like a window that you can look through. But when it’s been roughened up with sound waves, then it’s like frosted glass, and so now you can actually see the glass instead of just looking through the glass.

Q: Why are you interested in studying sonic booms in the ionosphere?

One reason is that Mother Nature does it, so we study it. That’s the most pure reason, I suppose.

Another reason is that the plasma physics of that part of the atmosphere are unusual. It’s a relatively cold plasma, and it’s a molecular plasma unlike plasmas that you find in the sun, which are atomic plasmas. It’s surrounded by neutral gas, so there’s a lot of chemistry that goes on.

It’s also in a part of the sky that’s very difficult to study because it’s too high for balloons and aircraft, and too low for satellites. This is the part of the sky that ultimately burns up all the meteors, so instruments can’t be there for very long. So remote sensing is the name of the game for getting long-term data for this part of the atmosphere.

Q: What instruments do you use to view the ionosphere?

The radar that the students and I operate was invented here at the UW in about 1997, by me and my former graduate student Frank Lind (PhD ’01). The radar is the first of its kind, and it works extremely well. It’s a very safe radar to be around, so it’s good for educational purposes. We can teach students about radar and not have to worry about them being exposed to high-power radio waves.

I’m extremely grateful to the National Science Foundation for thinking it wasn’t a crazy idea, and for funding it. Right now my student, Laura Vertatschitsch, is building a brand-new receiver that will work extremely well for digital TV as well as FM broadcasts.

Q: How does your radar work?

The thing that makes it novel is we don’t have a transmitter. We listen to other people’s broadcasts. In particular, we listen to commercial FM broadcasts.

Even more particularly, we prefer to listen to rock ‘n’ roll stations, which for interesting signal-processing reasons provide the best waveform for radar operation. Basically, they’re noisy. Rock ‘n’ roll is much noisier than, say, classical music, which has quiet places, or for that matter talk radio, which has pauses.

We have receivers here on Sieg Hall, and then another set of receivers on the UW’s Manastash Ridge Observatory, which is shielded from the Seattle transmitters by the Cascade Mountains. If there’s any signal above the mountains it scatters back down to the receivers at the observatory near Ellensburg.

By comparing the data from the two places, we can see the echoes of turbulence in the ionosphere up to about 700 miles to the northeast. We can tell how far away the echoes are, how fast they’re moving, and some of the spectral characteristics of the echoes that come back.

Q: What radio stations to you listen to?

Mostly we listen to 96.5 and 98.9. Several years ago I was interviewed by KUOW so we turned the radio to KUOW so my voice could be the transmitter signal. We didn’t get anything, but it was fun to do.

Q: What does the increase in solar activity mean for your research?

It means we detect the turbulence we study more often, perhaps weekly, as opposed to yearly. In 2003 and 2004 we would see irregularities two or three times a week. But for the past several years it’s been very, very scarce. So we’re excited that we’re entering a new sunspot maximum.

Q: How did you first become interested in radio waves?

I became a radio amateur in junior high school. I picked up more physics and math and science and engineering along the way, but basically I turned my junior high-school hobby into my career.