A national study led by a Michigan State University economist suggests Catholic schools are not superior to public schools after all.

“Across many outcomes, both academic and behavioral, we don’t find anything that seems to point to a real benefit of Catholic schools over public schools,” said Todd Elder, MSU associate professor of economics.

There are more than 2 million students in 6,700 Catholic schools in the United States, according to the National Catholic Educational Association.

The study, published in the Journal of Urban Economics, is the first to examine test scores starting in kindergarten. Results from the first national standardized tests in math and reading – taken just weeks after the start of kindergarten – show that Catholic school students perform much better on average than public school students. 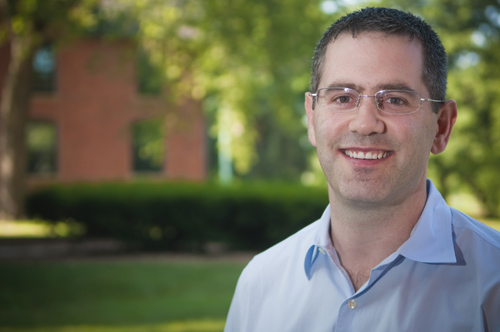 A study by Michigan State University economist Todd Elder suggests Catholic schools hold no benefit over public schools, at least when it comes to math, reading and behavioral issues. Photo by G.L. Kohuth

But if Catholic schools were truly better, as past research implies, that achievement gap would widen as the students progressed through school – and it doesn’t, in either math or reading, Elder said. In fact, when it comes to math scores, the public school students closed the gap somewhat by the eighth grade.

While previous research has noted that Catholic school students generally outperform public students academically, it has missed the point that Catholic students essentially start off in kindergarten with an advantage that has nothing to do with the schooling itself, he said.

Another possible explanation is that public schools have better designed curriculum, the study says.

Elder analyzed the data of about 7,000 students who participated in the Early Childhood Longitudinal Study: Kindergarten Class of 1998-99. The students were surveyed in kindergarten, first grade, third grade, fifth grade and eighth grade.

In addition to math and reading scores, the study looked at behavioral outcomes and other factors including absences, suspensions, tardiness and repeating grades. “Taken together,” the study says, “the estimates in this paper do not point to any beneficial effects of Catholic primary schooling.”