Research by the Universities of Liverpool and Manchester has found that people experiencing depressive episodes display increased brain activity when they think about themselves.

Using functional magnetic resonance imaging (fMRI) brain imaging technologies, scientists found that people experiencing a depressive episode process information about themselves in the brain differently to people who are not depressed.

Researchers scanned the brains of people in major depressive episodes and those that weren’t whilst they chose positive, negative and neutral adjectives to describe either themselves or the British Queen –  a figure significantly removed from their daily lives but one that all participants were familiar with. 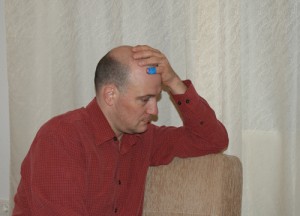 Professor Peter Kinderman, Head of the University of Liverpool’s Institute of Psychology, Health and Society, said: “We found that participants who were experiencing depressed mood chose significantly fewer positive words and more negative and neutral words to describe themselves, in comparison to participants who were not depressed.

“That’s not too surprising, but the brain scans also revealed significantly greater blood oxygen levels in the medial superior frontal cortex – the area associated with processing self-related information – when the depressed participants were making judgments about themselves.

“This research leads the way for further studies into the psychological and neural processes that accompany depressed mood. Understanding more about how people evaluate themselves when they are depressed, and how neural processes are involved could lead to improved understanding and care.”

Dr Laura Parkes, Senior Lecturer in Neuroimaging at The University of Manchester’s Institute of Population Health, said: “Functional Magnetic Resonance Imaging revealed a region of the brain where neural processing is altered in depression. This helps us to understand the neural processes underlying negative thoughts in depression and provides us with a measurement that could be used to test possible treatments.”

Dr May Sarsam, from the Mersey Care NHS Trust, said:  ” This study explored ways to consolidate some of the differences between medical and psychological models of depression. It showed that brain activity only differed when depressed people thought about themselves, not when they thought about the Queen or when they made other types of judgements, which fits very well with the current psychological theory.

“Thought and neurochemistry should be considered as equally important in our understanding of mental health difficulties such as depression.”

Depression is associated with extensive negative feelings and thoughts.  Nearly one-fifth of adults experience anxiety or depression, with the conditions affecting a higher proportion of women than men.

The research, in collaboration with the Mersey Care NHS Trust and the Universities of Edinburgh and Lancaster, is published in PLOS One.