For years, policymakers have attempted to create communities where a diverse group of residents not only live close to one other but also interact freely – in other words, neighborhoods that are both integrated and socially cohesive.

But that might be a lost cause, a Michigan State University sociologist argues in a new study.

As reported in the American Journal of Community Psychology, Zachary Neal found that neighborhood integration and cohesion cannot co-exist.

“Is a better world possible? Unfortunately, these findings show it may not be possible to simultaneously create communities that are both fully integrated and fully cohesive,” Neal said. “In essence, when it comes to neighborhood desegregation and social cohesion, you can’t have your cake and eat it too.” 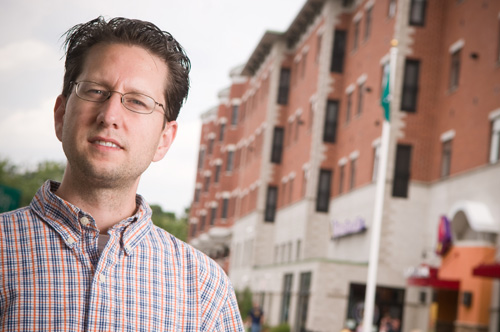 Creating communities that are both diverse and socially cohesive may be a pipe dream, argues Michigan State University sociologist Zachary Neal. Photo by G.L. Kohuth

The reason has to do with how people form relationships. Neal said people usually develop relationships with others who are close rather than far away, and similar rather than different from themselves (be it through race, religion, social class, etc.).

Neal ran computer modeling of different fictional neighborhoods and, after millions of trials, consistently found the same thing: The more integrated a neighborhood is, the less socially cohesive it becomes, and vice versa.

“These trends are so strong, it’s unlikely policy can change it,” Neal said.

He said policymakers should instead try to find the right balance between integration and cohesion, which may differ from community to community.

Neal said he started the project because past research had failed to turn up a city that is both truly integrated and cohesive – from the United States to the United Kingdom to Asia. But it’s not from lack of effort, he said.

“It’s not that local leaders and policymakers aren’t trying hard enough,” Neal said. “Rather, we now think it’s because the goals of integration and cohesion are just not compatible with each other.”