WARSAW, Poland – July 9, 2010 – Christian Hood and Eric Lo already knew that they had won the contest to see who had built the best application for the new Windows Phone 7, so they didn’t think it would be any big deal when they walked on stage to get their prize.

So they were caught off guard when Polish Minister Barbara Kudrycka, after handing them their first place check, also handed them each a preview Windows Phone 7 device, the first preview phones given to a non-Microsoft developer in the world.

“I think Microsoft is just amazing for allowing us to have these phones before they’re released to market,” said Eric Lo, one of two members of Team Beastware, from the Advanced Technologies Academy, a technical high school in Las Vegas. “I can’t believe we won.”

Hood and Lo won’t be the only Imagine Cup participants to get a Windows Phone 7 phone, just the first. All 400 competitors at this year’s finals received vouchers for their own version of the new phone – they just have to wait until the phones are ready, said Jon Perera, general manager of Microsoft Education. He noted that the students will get the phones sooner than they are available commercially this fall.

As for the Rock Star developer contest itself, the student developers who built and submitted the competition’s 130 apps and games used the Silverlight or XNA frameworks, and the Windows Phone Developer Customer Technology Preview to build their applications. And despite the fact that they had to build their apps in two months on an emulator (they didn’t have an actual phone to work with), “they kicked out some amazing apps,” Iyer said. 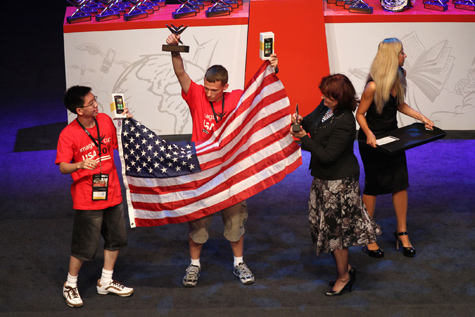 About the image above: Windows Phone 7 ‘Rock Stars’. Team Beastware’s Eric Lo and Christian Hood hold up the American flag and two new Windows Phones they were given after winning the Windows Phone 7 “Rock Star” Award. Image credit: Microsoft.

Beastware’s 2D game Droid Assault was the best for a number of reasons, said Iyer, one of the judges in the competition.

“They created an experience that was pretty compelling on the device,” he said. “I was just blown away when I loaded it up on my phone.”

Iyer was particularly impressed that they were able to test their app on Xbox and Zune (both of which support the XNA framework). That allowed them to simulate how the game would work on a Windows Phone 7 device. “They took a leap of faith that it would work, and it did,” he said.

The second place winner was Tselina, a team from Indonesia that used Silverlight to build a comic book reader. Hypo Team from TAR College in Malaysia built a game on the XNA platform that finished third.

The caliber of all of the student-submitted applications was very high, Iyer said. “If this is any indication of the quality of apps that are going to come, then I can’t wait.”

Iyer said Beastware and other student developers are encouraged to keep building new apps for the phone, and he encouraged them to sign up to Microsoft’s DreamSpark program so they can submit apps for free to the Windows Phone Marketplace via the Windows Phone Developer portal. The fee to submit an app to Marketplace is $99, but any student who signs up for DreamSpark can submit their app for free, Iyer said.