One of the keys to better nutrition and health for the people of Rwanda fits in the palm of a hand: legumes. But despite their nutritional punch, legumes—including common beans, cowpeas, and lima beans—are highly susceptible to drought and disease. That’s what brought MSU scientists to Rwanda, which has the world’s highest bean consumption per capita, to work on breeding heartier varieties that can sustain the people and economy of the country.

To increase yields, MSU’s Jim Kelly, a professor of crop and soil sciences who has been developing bean varieties for more than 30 years, is introducing new varieties as well as educational materials to help farmers grow them successfully. Using traditional methods that don’t require genetic manipulation, Kelly has bred climbing beans, as opposed to bush-like beans, that already have improved yields from a quarter ton per acre to four tons per acre in the country’s high-altitude, steep, hilly terrain.

Widows of the Rwandan genocide are among those who benefit from the development of new varieties of legumes, which allows them to improve their lives and the lives of their children. And with support from the U.S. Agency for International Development, Michigan State will continue to help Rwanda and developing nations find sustainable and secure food sources. 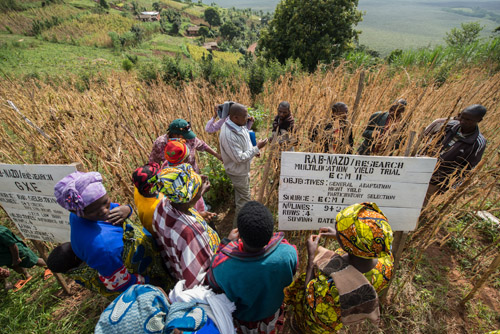 MSU researchers, partnering with the Rwanda Agriculture Board, teach local farmers how to test and grow beans that tolerate drought and resist diseases. Edouard Murwanashyaka, from the agriculture board, asks local farmers to identify their favorite varieties of beans from the various trials on the test plots. Photo by Kurt Stepntiz

Jim Kelly has been breeding new varieties of beans for more than 30 years. During a trip to Rwanda 10 years ago with MSU graduate student Gerardine Mukeshimana—a native of the country—he saw a way he could help farmers there.

“I felt that the research that I conduct both in Michigan and elsewhere would be applicable to Rwanda’s farmers,” Kelly says. “I knew that if a funding opportunity arose, I would seek support to conduct research to improve beans in Rwanda and train future plant breeders.”

Kelly is back in Rwanda with Mukeshimana—now a doctoral student—working with local farmers to improve their bean crops.

Rwanda has the highest per capita bean consumption in the world, but the country’s bean varieties aren’t drought tolerant or disease resistant. The region needed new varieties with these attributes to help keep production and yield high enough to meet demand and provide economic stability to bean farmers, many of whom are widows from the genocide in Rwanda who are caring for families.

“Beans are an important part of the agriculture of the country, particularly for women and their families,” Kelly says. “Productivity and quality need to be improved in the changing environment. This project addresses these needs by developing and testing new bean varieties that farmers want to grow and consume.” 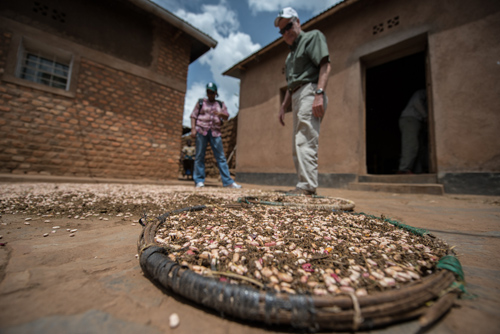 MSU’s Jim Kelly, professor of crop and soil sciences, and research assistant Gerardine Mukeshimana visit a farm in the Gicumbi district of Rwanda. They have been working to introduce more durable bean varieties and to educate farmers so they can grow more nutritious food and improve their livelihood. Photo by Kurt Stepnitz

Kelly bred and introduced climbing beans to Rwanda, which have improved yields from a quarter ton per acre to four tons per acre in this country of steep, hilly terrain. In 2012, Kelly released new climbing bean varieties—white, red, and red mottled—suited to high-altitude zones in Rwanda. He also helped produce educational materials to inform farmers about the new varieties and methods for growing the climbing beans.

The bean variety program is funded by the United States Agency for International Development and involves collaboration with colleagues from the Rwanda Agriculture Board. Kelly also has a strong bean breeding program in Ecuador. Because Ecuador’s terrain and environment are similar to Rwanda, he is able to adapt much of that knowledge.

“The ultimate goal of this project is to be able to leave a trained cadre of scientists who will have the ability and interest to continue research to sustain agricultural productivity in Rwanda under changing climatic conditions,” Kelly says. “For me, I want to be able to extend the land-grant mission beyond the borders of Michigan and MSU.” 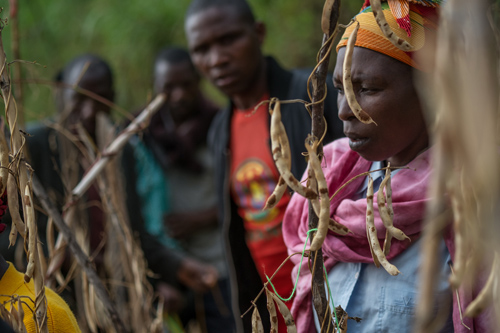 Farmers from the Kivuye district evaluate, identify, and label bean varieties as they pick their favorites from field trials. Photo by Kurt Stepnitz

Gerardine Mukeshimana is a PhD student in the Department of Plant Breeding, Genetics, and Biotechnology and a research assistant for the MSU bean breeding program

Beans are a highly nutritious source of vitamins, fiber, and micronutrients, including iron and zinc, which are needed for normal growth and function. They are found in everyday Rwandan dishes, eaten with other sources of carbohydrates, such as root and cereal crops, to provide balanced meals and healthy diets to millions of Rwandans.

Through MSU’s bean breeding program, I was able to integrate my PhD research project on breeding for drought tolerance in common beans with other bean breeding aspects of the Rwanda Agriculture Board’s bean program.

My research was conducted in eastern regions of Rwanda where drought is an endemic constraint to bean production. I was fortunate to interact with many men and women bean farmers, learn about their specific interest in beans, and help them understand the benefits associated with integrating beans into their diets.

Introducing dry bean varieties that combine high-yielding, high-nutrition attributes and resistance to multiple stresses is key to addressing food security and malnutrition issues in Rwanda. Traditionally, beans have been a crop grown by women for home consumption, but it is amazing to see how the crop is evolving to become a cash crop that is putting considerable amounts of money in farmers’ pockets.

Molecular biology techniques have become important tools in plant breeding. I am very happy that through the project I was able to assist the bean program in getting access to the needed equipment and to help train staff in molecular breeding techniques. I hope that soon the breeding program will be able to integrate both conventional and molecular techniques to improve bean varieties that are responding to the needs of farmers in Rwanda.