A long-standing controversy regarding the semiconductor gallium manganese arsenide, one of the most promising materials for spintronic technology, looks to have been resolved. Researchers with the U.S. Department of Energy’s Lawrence Berkeley National Laboratory (Berkeley Lab) in collaboration with scientist from University of Notre Dame have determined the origin of the charge-carriers responsible for the ferromagnetic properties that make gallium manganese arsenide such a hot commodity for spintronic devices. Such devices utilize electron spin rather than charge to read and write data, resulting in smaller, faster and much cheaper data storage and processing. 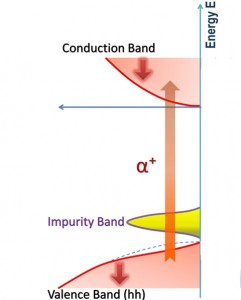 Researchers with Berkeley Lab and Notre Dame University found that the spintronic properties of gallium manganese arsenide arise from holes in an impurity band, created by manganese doping, that depletes the valence band and shifts the Fermi level. Image credit: Berkeley Lab

Wladek Walukiewicz, a physicist with Berkeley Lab’s Materials Sciences Division and Margaret Dobrowolska, a physicist at Notre Dame, led a study in which it was shown that the holes (positively-charged energy spaces) in gallium manganese arsenide that control the Curie temperature, the temperature at which magnetism is lost, are located in an impurity energy band rather than a valence energy band, as many scientists have argued. This finding opens the possibility of fabricating gallium manganese arsenide so as to expand the width and occupation of the impurity band and thereby boost the Curie temperature to improve spintronic potential.

“Our results challenge the valence band picture for gallium manganese arsenide and point to the existence of an impurity band, created by even moderate to high doping levels of manganese,” Walukiewicz says. “It is the location and partially localized nature of holes within this impurity band that drives the value of the Curie temperature.”

The results of this study have been published in the journal Nature Materials in a paper titled “Controlling the Curie temperature in (Ga,Mn)As through location of the Fermi level within the impurity band.” Co-authoring the paper with Walukiewicz and Dobrowolska were Kritsanu Tivakornsasithorn, Xinyu Liu, Jacek Furdyna, Mona Berciu and Kin Man Yu.

As a commercial semiconductor, gallium arsenide is second only to silicon. Substitute some of the gallium atoms with atoms of manganese and you get a ferromagnetic semiconductor that is well-suited for spintronic devices. While it has been established that the ferromagnetism of gallium manganese arsenide is hole-mediated, the nature of the hole-states, which has a direct and crucial bearing on its Curie temperature, has been vigorously debated.

In semiconductors and other solid-state materials, the valence band is the range of energies in which the movement of charge is determined by availability of holes. Doping gallium arsenide with manganese can create an impurity band that depletes the valence band and shifts the Fermi level, the energy level at which the electronic states below are filled and those states above are empty. 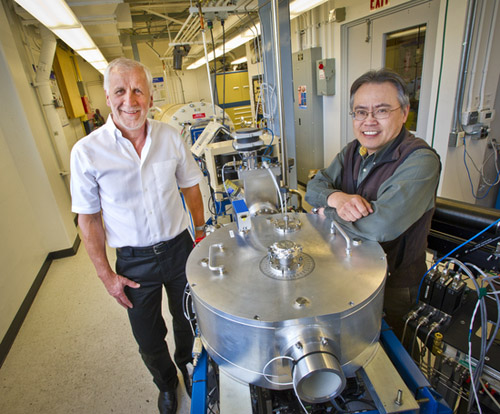 “The question has been whether the holes mediating the interactions of manganese spins reside in a delocalized valence band, or in a manganese-derived partially localized impurity band,” Walukiewicz says. “The valence band model assumes that a separate impurity band does not exist for manganese concentrations higher than about two-percent.”

Walukiewicz and his co-authors addressed the issue through channeling experiments that measured the concentrations of manganese atoms and holes relevant to the ferromagnetic order in gallium manganese arsenide. These experiments were carried out at Berkeley Lab’s Rutherford Backscattering facility, which is operated under the direction of co-author Kin Man Yu. The results of these experiments were then combined with magnetization, transport and magneto-optical data performed at the University of Notre Dame.

“We were able to determine where the manganese atoms were located, what fraction of this total replaced gallium and acted as electron acceptors (meaning they created ferromagnetic-mediating holes), and what fraction was in the interstitial sites, acting as positively-charged double donors compensating for a fraction of manganese acceptors,” Walukiewicz says. “Taking all our data together, we find that the Curie temperature of gallium manganese arsenide can be understood only by assuming that its ferromagnetism is mediated by holes residing in the impurity band, and that it is the location of the Fermi level within the impurity band that determines the Curie temperature.”

Electron spin is a quantum mechanical property arising from the magnetic moment of a spinning electron. Spin carries a directional value of either “up” or “down” and can be used to encode data in the 0s and 1s of the binary system. Walukiewicz says that understanding the factors that control the Curie temperature can serve as a guide for strategies to optimize ferromagnetic materials for spintronic applications.

“For example, with appropriate control of the manganese ions, either co-doping with donor ions, or modulation doping, we can engineer the location of the Fermi level within the impurity band to best the advantage,” he says.

Walukiewicz says the findings of this study further suggest that it should be possible to optimize magnetic coupling and Curie temperature for the whole family of ferromagnetic semiconductors by tuning the binding energy of the acceptor ions.

This research was supported in part by the DOE Office of Science, and by grants from the National Science Foundation, the Natural Sciences and Engineering Research Council of Canada, and the Canadian Institute for Advanced Research.