*Device could save time and money for oil/gas industry*

Mechanical engineering professor David Sinton and his research team have developed a process to analyze the behaviour of bitumen in reservoirs using a microfluidic chip, a tool commonly associated with the field of medical diagnostics. The process may reduce the cost and time of analyzing bitumen-gas interaction in heavy oil and bitumen reservoirs.

Sinton and post-doctoral researcher Hossein Fadaei are using the chips to examine the way highly pressurized carbon dioxide (CO2) behaves when injected into bitumen, which is a type of petroleum. The new method, reported in the journal Energy & Fuels, could streamline the way fossil energy companies measure how gases move within heavier oils like bitumen.

“To my knowledge, this is the first application of microfluidics in the study of gas-bitumen diffusion,” said Sinton.

Bitumen and heavy oil are difficult to extract from reservoirs due to its density. There are several methods of extraction, one of which uses CO2-rich gas to help liquify the bitumen for easier extraction. This process can supplement the steam-injection method that requires heavy inputs of energy and water, and it presents opportunities for the capturing of CO2 in the reservoir instead of being released into the atmosphere.

Before companies pump CO2 into reservoirs, they need to first determine how the CO2 and oil will behave under specific pressures and in specific rock formations. Conventional methods of analysis can take hours or even days for a single test result. 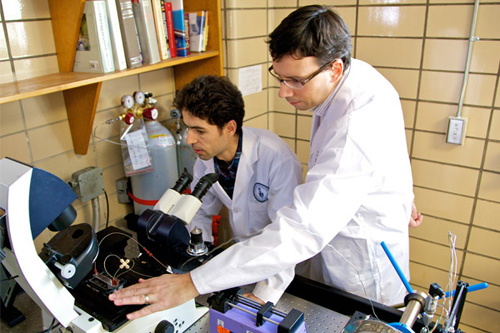 Mechanical engineering professor David Sinton (right) and post-doctoral researcher Hossein Fadaei have developed a praocess that may save the oil and gas industry time and money. (Photo by Raj Granger)

Sinton and his colleagues use a small glass microchip to replicate a pore within a rock reservoir. The channels in the pore are 50 microns wide, or about half the diametre of a human hair. The device is initially filled with CO2 at low pressure and a small sample of bitumen is injected into the centre of the chip. High pressure CO2 is then injected at both ends of the chip and the swelling of the oil is measured over time.

“This takes 10 minutes and uses a nanolitre plug of sample. If you can do a test in a few minutes and perform many tests in parallel, that’s a lot cheaper,” he noted. “The experimental setup is also quite simple compared to existing methods.”

The experimental method developed shows potential as a rapid, reliable approach that could be used by both researchers and the oil and gas industry. Because it uses such small samples, the method could also be employed using hazardous solvents.

Sinton is seeking industrial partners while working to further refine the device. His project was funded in part by Carbon Management Canada, a national Networks of Centres of Excellence, which funds research to reduce CO2 emissions in the fossil energy industry and other large-scale emitters.