Silvio Berlusconi and sexual affairs with seven women at once, put the Italian prime minister in the dock.
Italy’s Justice decides to put in the dock Prime Minister Silvio Berlusconi on charges of prostitution of juveniles. Berlusconi hosted a “sexual binge party’ with seven women, six of them Brazilian, two were minors. In s scenario narrated by a madam as cinematographic, the seven in a row have been ‘caught’ one by one by Berlusconi.
The decision to prosecute Mr Berlusconi came from the Judge Cristina Di Censo. She decided immediately to prosecute the Prime Minister of Italy for prostitution of a young 17 year old Moroccan girl for abuse of power in a sexual scandal known as “Rubygate.”

The trial is scheduled to start on April 6, as determined by the judge. The decision is the first of the long judicial list of Berlusconi since the change in the law of legitimate impediment – an article that allowed Berlusconi to allege official engagements for not attending the hearings, which were postponed for six months, and that the prime minister used often as a legal shield. 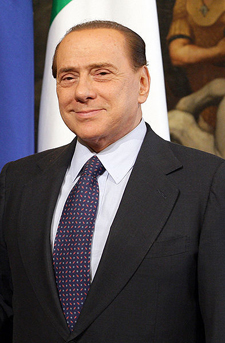 With the change recently approved by the Constitutional Court, Berlusconi can claim incompatibility with his schedule, but it is up to the judges to define if the commitment justifies postponing the hearing. The change also dropped the requirement that the postponement of the hearing is no more than six months.

Berlusconi has faced several court cases related to fraud and corruption in business, but this is the first time that the 74 year old billionaire businessman will be tried for personal conduct.

Milan prosecutors say that Berlusconi paid for sex to a “significant number” of young women, including Moroccan dancer, Karima El Mahroug, nicknamed Ruby, when she was only 17 years old.

Prosecutors also say he then exerted undue pressure on police so that the girl was released from a police station in Milan after being arrested on charges of theft, and that Berlusconi was concerned that his relationship with the Moroccan was revealed in interrogations.

Berlusconi denies any wrongdoing and says he never paid for sex. He said prosecutors and the left wing politically motivated are pursuing him and trying to destroy his career. Until now, the Italian prime minister has refused to testify in the investigation of the Rubygate case.

The scandal came at a difficult time for the prime minister, whose power was weakened by a split in his party, ‘The People of Freedom,’ last year, which cost him a safe majority in Parliament. The latest opinion polls show that the investigation has damaged Berlusconi, but not yet caused a ‘mortal’ blow politically against him.

In 2009, Berlusconi faced several scandals involving his personal life. Several photos of parties held in his mansions and showing young topless women were published in Italian and international press.

In May last year, his second wife, Veronica, filed for divorce accusing him of having affairs with minors, after pictures of an 18 year old aspiring model emerged from Berlusconi’s party. Berlusconi denied having an affair with the girl.

In July, a companion, Patrizia D’Addario, said she had received money to go to a party in Berlusconi’s villa, in Rome, and had slept with him. Berlusconi says he is “no saint,” but guarantees that he never paid for sex.
– by Antonio Carlos Lacerda (Translated from the Portuguese version by: Lisa Karpova)  *Source: Pravda
(Visited 15 times, 1 visits today)