By studying the origins of different isotope ratios among the elements that make up today’s smorgasbord of planets, moons, comets, asteroids, and interplanetary ice and dust, Mark Thiemens and his colleagues hope to learn how our solar system evolved. Thiemens, Dean of the Division of Physical Sciences at the University of California, San Diego, has worked on this problem for over three decades.

In recent years his team has found the Chemical Dynamics Beamline of the Advanced Light Source (ALS) at the U.S. Department of Energy’s Lawrence Berkeley National Laboratory (Berkeley Lab) to be an invaluable tool for examining how photochemistry determines the basic ingredients in the solar system recipe.

“Mark and his colleagues Subrata Chakraborty and Teresa Jackson wanted to know if photochemistry could explain some of the differences in isotope ratios between Earth and what’s found in meteorites and interplanetary dust particles,” says Musahid (Musa) Ahmed of Berkeley Lab’s Chemical Sciences Division, a scientist at the Chemical Dynamics Beamline who works with the UC San Diego team. “They needed a source of ultraviolet light powerful enough to dissociate gas molecules like carbon monoxide, hydrogen sulfide, and nitrogen. That’s us: our beamline basically provides information about gas-phase photodynamics.” 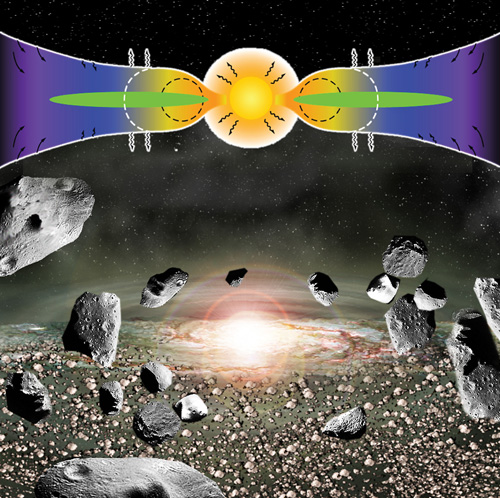 The protosun evolved in a hot nebula of infalling gas and dust that formed an accretion disk (green) of surrounding matter. Visible and ultraviolet light poured from the sun, irradiating abundant clouds of carbon monoxide, hydrogen sulfide, and other chemicals. Temperatures near the sun were hot enough to melt silicates and other minerals, forming the chondrules found in early meteoroids (dashed black circles). Beyond the “snowline” (dashed white curves), water, methane, and other compounds condensed to ice. Numerous chemical reactions contributed to the isotopic ratios seen in relics of the early solar system today. Image credit: Berkeley Lab

Beamline 9.0.2, the Chemical Dynamics Beamline, generates intense beams of VUV – vacuum ultraviolet light in the 40 to 165-nanometer wavelength range (a nanometer is a billionth of a meter)– which can be precisely tuned to mimic radiation from the protosun when the solar system was forming.

Oxygen and sulfur are the third and tenth most abundant elements in the solar system and two of the most important for life. Their isotopic differences from Earth’s are clearly seen in many different kinds of meteorites. Thiemens’s team first used beamline 9.0.2 in 2008 to test a theory, called “self-shielding,” about why oxygen-16 is less prevalent in these relics of the primitive solar system than it is in the sun, which contains 99.8 percent of all the mass in the solar system. To their surprise, the experimental results showed that self-shielding could not resolve the oxygen-isotope puzzle.

More recently Thiemens’s group used beamline 9.0.2 to perform the first VUV experiments on sulfur, using the results to build a model of chemical evolution in the primitive solar nebula that could yield the isotopic ratios of sulfur seen in meteorites. They report their findings in Proceedings of the National Academy of Sciences. 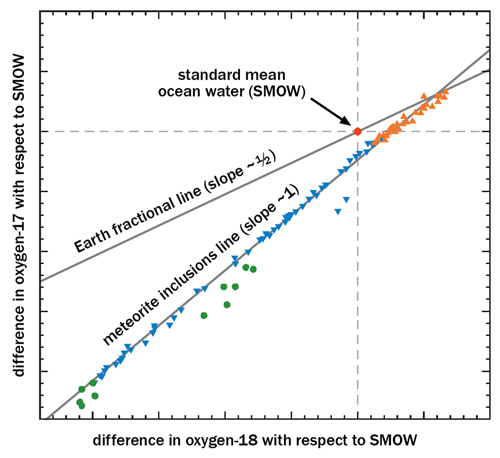 A three-isotope plot of oxygen begins with the Earth-standard mean ocean water ratio (SMOW). Departures from SMOW in the fractions of oxygen-17 (vertical axis) and oxygen-18 (horizontal axis) fall along a slope of about one-half, a sign of processes solely dependent on the differing isotope masses. In meteorites and other interplanetary sources, differing oxygen ratios fall on a different slope, signaling chemical processes as well as physical ones. Image credit: Berkeley Lab

Oxygen is the most abundant element on Earth, present in air, water, and rocks; 99.762 percent of it is the isotope oxygen-16, with eight protons and eight neutrons. Oxygen-18 has two additional neutrons and accounts for another two-tenths of a percent; oxygen-17, with one extra neutron, provides the last smidgen, less than four-hundredths of a percent.

Ahmed explains the two basic kinds of processes that account for these ratios. “One depends on the mass of the isotopes themselves,” he says. “Oxygen-18 is two neutrons heavier than oxygen-16. One effect of this, although not the only one, is that when the temperature rises, oxygen-16 evaporates faster. And when the temperature falls, oxygen-18 condenses faster.”

Changes in temperature and other physical factors can thus produce different isotope ratios – that’s why there’s a greater proportion of oxygen-18 in raindrops than in the clouds they fall from, for example.

Samples whose isotope ratios don’t fall on the slope-one-half line didn’t result from mass-dependent processes. In 1973 the ratios of oxygen isotopes in carbonaceous meteorites, the oldest objects in the solar system, were found to vary significantly from those on Earth. Their graph line had a slope close to one. A decade later Thiemens and John Heidenreich found that ozone, the three-atom molecule of oxygen, showed a similar isotope trend, with a similar slope of one – a relationship that was at least partly due to the molecule’s chemical formation.

Sulfur isotope ratios are plotted in a similar way; the standard is an iron sulfide mineral called Diablo Canyon Troilite – not native to Earth, however, but found in a fragment of the meteorite that created Arizona’s Meteor Crater.

“Mass-independent processes suggest chemical reactions, whether in the lab, the stratosphere, or the early solar system,” says Ahmed. “In the proto-solar system, bathed in intense ultraviolet light, these might have occurred on a grain of rock or ice or dust, or in just plain gas. The goal is to identify distinctive isotopic fractionations and examine the chemical pathways that could have produced them.”

Since Thiemens’s early work with ozone 30 years ago, his UC San Diego laboratory has perfected methods of recovering primordial samples from dust, meteorites, and the solar wind. Thiemens and Chakraborty were members of the science team for NASA’s Genesis mission, and Chakraborty was able to extract mere billionths of a gram of oxygen from particles of the solar wind even after the spacecraft’s collectors were badly damaged when they crashed upon return to Earth.

Like oxygen, sulfur isotopes show up in different fractions in different solar system sources. Tracing their possible origins, the recent study of sulfur isotopes at beamline 9.0.2 began by flowing hydrogen sulfide gas – the most abundant sulfur-bearing gas in the early solar system – into a pressurized reaction chamber, where the synchrotron beam decomposed the gas and deposited elemental sulfur on “jackets” made of ultraclean aluminum foil.

The experiment was performed at four different VUV wavelengths, and the carefully stored aluminum jackets were taken to the Thiemens lab in San Diego, where Chakraborty and Jackson chemically extracted the sulfur and then measured its isotopes using Isotope Ratio Mass Spectrometry. In all samples the isotope compositions were found to be mass independent.

One source of fractionation in nature was photodissociation of hydrogen sulfide as the gas condensed to iron sulfide in the inner solar system, driven by intense 121.6-nanometer-wavelength ultraviolet light as the young star repeatedly shook with violent flares and upheavals. Different classes of meteorites – and different parts of the same meteorites, such as their crust or various inclusions – subsequently evolved different isotope ratios, depending on where and when in the solar system they formed. Sulfur compositions evolved independently from the way oxygen isotope compositions evolved.

The most recent target of research by the Thiemens group at beamline 9.0.2 is nitrogen, the seventh most abundant element in the solar system. On Earth, 99.63 of nitrogen is nitrogen-14, and nitrogen-15 is the remaining 0.37 percent. Measurements of the solar wind, carbonaceous meteorites, and other sources show wide swings in their proportions. The work is ongoing.

Says Musa Ahmed, “Tracking down how isotopic ratios may have evolved, we basically send these elements back in time. The more we learn about the fundamental elements of the solar system at the Chemical Dynamics Beamline, the more it’s like really being out there when the solar system began.”

This work was funded by NASA’s Origins and Cosmochemistry programs. The Advanced Light Source is supported by DOE’s Office of Science.