Space Station Commander Kevin Ford exchanged Valentine’s Day greetings with his adult kids Heidi and Anthony — he speeding by about 220 miles above Providence and they watching him fly past from Brown’s Ladd Observatory.

PROVIDENCE, R.I. [Brown University] — Rhode Islanders with their eyes skyward around 6 p.m. last Thursday might have noticed a curiously bright speck speeding across the evening sky. No, it wasn’t a UFO or an asteroid. It was the International Space Station, and for Providence resident Heidi Ford, it was dad’s office.

Heidi’s father Kevin Ford is currently the commander of the ISS. And with the help of Brown’s Ladd Observatory and astronomer Robert Horton, Heidi and her brother Anthony, who was visiting from Houston, got to see last week’s flyby close up while they talked to their dad on the phone.

“One of the things [Anthony and I] like to do is to pop outside to watch dad fly over, which you can do on occasion when the timing is just right,” Heidi said. “We were looking at the schedule to see when the flyover would be so we could go see him. I remembered that the Ladd was open to the public, so I thought I’d call over there and see if this is something we could visit the Ladd to do.” 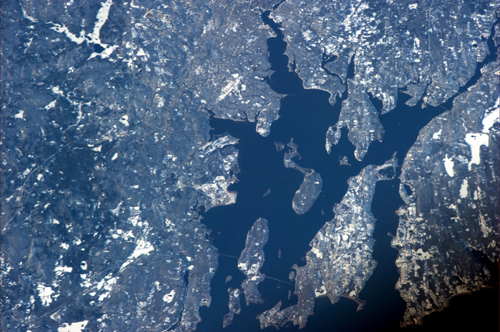 Rhode Island on a clear day. Commander Ford photographed Narragansett and Mt. Hope bays from the International Space Station. His adult kids watched him fly by from the Ladd Observatory, near the top edge of the photo, just right of center. Image credit: Brown University

Horton was happy to oblige. The Ladd’s main telescope doesn’t have the ability to track fast-moving objects like the ISS, but Horton had a few at home that could do the job. So he set one of them up at the Ladd and prepared to track the station during its six-minute pass.

Just before the flyby, Heidi’s phone rang. It was her dad calling from the station.

“He told her, ‘I’m over Texas. I’ll be there in a few minutes,’” Horton recalls. “Sure enough the point of light appeared in the sky and we started to track it. They could look through the eyepiece and actually make out the solar panels while they were talking with him.”

Heidi had let her dad know earlier in the day the she and Anthony would be watching. “He’s able to call down whenever he has a break in his schedule,” she said. “It worked out that he was able to call then and we were able to talk as he flew over.” 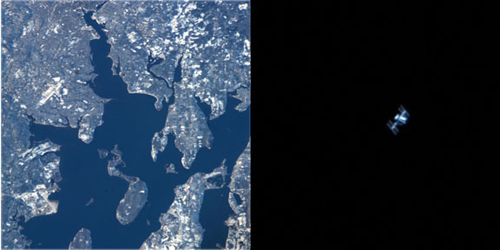 Opposite ends of the telescope. Commander Ford had the grand view of Rhode Island. Heidi and Anthony could just make out the Space Station’s solar panels through the telescope at Ladd Observatory. Image credit: Robert Horton/Brown University

It was the first time Heidi and Anthony had gotten to see the ISS close-up through a telescope.

Not only that, but father and kids were able to exchange pictures from their own perspectives. The ISS had flown over Rhode Island earlier in the day. Commander Ford had taken a few pictures out the window that he e-mailed down. In return, Heidi and Anthony sent a few pictures Horton had taken earlier with his telescope to show what they were seeing.

It all made for a very special Valentine’s Day flyby, Heidi said. She and her brother were also quite impressed with Ladd Observatory.

“Obviously I’m pretty interested in space in general just because of my dad’s career,” Heidi said, “but we were still really shocked by how well we were able to see the moon and stars and even Jupiter through the Ladd’s telescope — especially when you think about it being a century old. It’s a really great thing in the middle of Providence that I think a lot of people don’t realize is there.”

It was a special evening for Horton as well, even though he found himself a little tongue-tied when Heidi handed him the phone to talk with her father.

“I can think of a thousand questions to ask him now that I’m not on the phone with him,” Horton said. “But, frankly, I was awestruck at the time.”

The observatory is open to the public every Tuesday from 7 to 9 p.m. The ISS website can figure out when the Space Station will again be visible from Providence or any other location: spaceflight.nasa.gov/realdata/sightings/index.html.