Regional cloud changes, such as those that result in less rain during monsoons in India and those that indicate a widening of the tropics, may be as important to watch as the overall amount of cloud cover, new University of Washington research indicates.

Authors of the paper, led by Ryan Eastman, a UW research scientist in atmospheric sciences, set out to examine observations collected from weather stations around the world as a way to study the distribution of clouds. The research was recently published in the American Meteorological Society’s Journal of Climate.

Among the many reasons that scientists study clouds are that cloud properties are expected to change with global warming and clouds have an impact on temperature and rainfall.

Because scientists would need to examine much more data about changes in types of clouds at different altitudes at different locations in different seasons, it’s difficult to ascertain how important this change in cloud cover over land is.

“We do expect global cloud cover to respond to climate change, but this trend alone cannot be directly linked as a cause or result of global warming,” Eastman said. 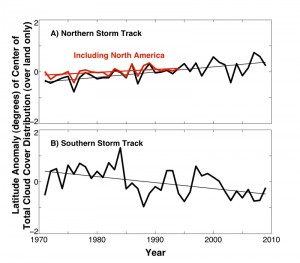 The research was based on visual observation that doesn’t include information about important changes to cloud features like thickness or the ability to reflect light.

Visual observations do, however, shed light on some notable changes in cloud distribution.

For instance, the researchers found a significant poleward shift in the cloud cover associated with the mid-latitude storm track, often described as the jet stream, as well as a shift poleward in the dry, cloud-free areas over the subtropical deserts.

“Since these clouds are associated with the jet stream, it indicates the jet stream is also moving poleward,” Eastman said. “This supports other findings that the tropics are expanding with the shift in the jet stream.” 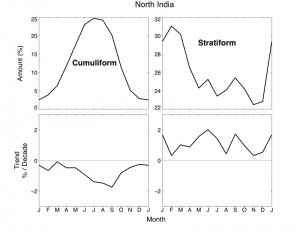 In 2006, UW scientists were the first to suggest that the jet stream was shifting, leading to an expansion of the world’s driest regions.

In their research, Eastman and Warren also discovered significant changes in clouds over Northern India that are consistent with a drying trend there. They found an increasing incidence of stratiform clouds and fewer cumuliform clouds. Stratiform clouds are low, horizontal clouds that form in sheets.They tend to produce light rain or drizzle and are less likely to produce heavy rain than cumuliform clouds, which are distinct, vertical clouds created by warm, moist air rising in turbulent updrafts.

The change could be caused by heavy pollution containing large amounts of black carbon in the area. Black carbon absorbs sunlight, creating a warming effect aloft while reducing the amount of sunlight that reaches the surface, cooling it. That stabilizes the atmosphere, creating an environment more conducive to the formation of stratiform than cumulonimbus clouds.

“We saw a shift in cloud types in this area, which supports models that show that pollutants are causing this change in the way clouds form and on precipitation,” Eastman said.

In northeastern China, which like India has also experienced droughts along with a large increase in pollution, the researchers were unable to identify a similar pattern. Instead, they found that the area is experiencing a slight decline in both cumuliform and stratiform clouds.

Eastman and Warren hope to continue analyzing the observations.

“Our goal is to keep this going so we can verify satellite measurements and support modelers in their work,” Eastman said.

The researchers face some challenges though.

“There are more than 100 countries, thousands of observers and millions of data points,” Eastman said. “You’re going to see some problems.”

For example, they detail anomalies they found with data from weather stations in Russia that appeared to show a dramatic change in clouds over some areas. When they examined data on other kinds of clouds observed from the same stations, they found that those clouds didn’t substantially change, which they regard as unlikely. The researchers also noticed that the dramatic changes in observed clouds occur in different years at different stations.

“We have not identified the cause for the spurious changes in cloud types shown here. It is most likely the result of an undocumented change in observing procedure or training at some stations,” they wrote in the paper.

Eastman and Warren also face a possible reduction in the overall volume of data they are able to collect. Some regions of the world, like the U.S. and Canada, are switching from human observations to machine observations.

“The data set has to be homogeneous,” Eastman said. That means the pair can’t incorporate data from North America in their reports.