Search for Dark Matter Narrowed by New Data From XENON100

Today, scientists from the XENON collaboration announced the result from their search for the elusive component of our universe known as dark matter. After analyzing one hundred days of data taken with the XENON100 experiment, they see no evidence for the existence of Weakly Interacting Massive Particles (WIMPs), the leading candidates for the mysterious dark matter. The XENON100 experiment is operated deep underground at the Gran Sasso National Laboratory of the Italian National Institute for Physics (INFN).

While the group observed three candidate events, two had been expected in conjunction with background radiation. This new result translates into the highest sensitivity reported by any dark matter experiment to date, and serves to further constrain the new physics models for particle dark matter, which will help target future WIMP searches. A paper about the results has been submitted to the journal Physical Review Letters and posted to arXiv, the e-print archive hosted by the Cornell University Library.

A direct observation of WIMPs would link the largest observed structures in the universe with the world of subatomic particle physics. While no detection can be claimed yet, the level of sensitivity achieved by the XENON100 experiment may allow an actual detection in the near future. 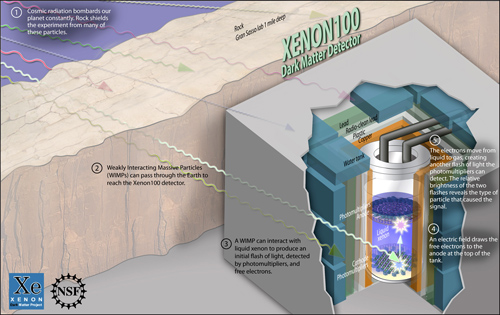 About the image: (1) The surface of the Earth is constantly bombarded by cosmic radiation. Only the most energetic particles penetrate the rock, so detectors aiming to "see" the rare signal from cosmic Dark Matter are placed beneath the Earth. (2) Dark Matter in the form of Weakly Interacting Massive Particles (WIMPs) can traverse the Earth without interacting with it to reach XENON100, a detector filled with liquid xenon that is designed to be sensitive to such rare encounters. (3) A WIMP interaction in the liquid xenon will excite atoms and free electrons, which will be picked up again swiftly by the atoms. Both processes produce a flash of light that can be detected by photomultipliers, which act as extremely sensitive cameras, at each end of the tank. (4) An electric field running through the detector prevents some of the electrons from recombining with the xenon atoms. These free electrons are pushed upwards towards the anode, an electrode through which electric current flows, until they reach the liquid-to-gas interface. (5) At the interface, a stronger electric field pulls the electrons out of the liquid into the gas, where they create another flash of light that is detected by the same photomultipliers. The brightness of this second flash compared with the first one reveals the type of particle that caused the signal. Image credit: Zina Deretsky, National Science Foundation

XENON100 is an ultra-sensitive device, with specially designed layers of water, lead, copper and other shielding, to filter out radiation and other sources of energy that could cause a false signal. This is also why the experiment is located beneath a mile of rock and Earth–these materials help shield the detector from cosmic radiation that is constantly bombarding Earth.

The XENON100 detector uses 62 kg of liquid xenon as a WIMP target, and measures the tiny charge and light signals that are expected when rare collisions between WIMPs and xenon atoms take place. Xenon–the same element used to make those ultra-bright car headlights that have a bluish tint–is used in this experiment because it has a large nucleus that WIMPS can collide with. When such a collision occurs, it creates a bluish light and a charge that scientists can detect with highly sensitive cameras positioned at each end of the detector.

Cosmological observations consistently point to a picture of our universe where ordinary matter as we know it makes up only about 4 percent, while new, yet unobserved forms of so-called dark matter and dark energy make up the rest. This is consistent with ideas on small scales too, since attractive extensions of the Standard Model of particle physics suggest that exotic new particles, which are perfect dark matter candidates, exist. This makes Weakly Interacting Massive Particles of interest to both cosmology and particle physics. Thus, the search for WIMPs is well motivated, and a direct detection is a central piece of information that could confirm this new picture of our universe. New data from the 2011 run, and the collaboration’s plan to build a much larger experiment with 2500 kg of xenon in the coming years, promise an exciting decade towards the solution of one of nature’s most fundamental mysteries.

XENON100 is supported by the collaborating institutions and by the National Science Foundation and the Department of Energy in the U.S., by the Swiss National Foundation in Switzerland, by l’Institut national de physique des particules et de physique nucléaire and La Région des Pays de la Loire in France, by the Max-Planck-Society and by Deutsche Forschungsgemeinschaft in Germany, by the Weizmann Institute of Science, by the German-Israeli Minerva Gesellschaft and GIF in Israel, by FOM in the Netherlands, by the Fundação para a Ciência e Tecnologia in Portugal, by the Instituto Nazionale di FIsica Nucleare in Italy and by STCSM in China.