Imagine a war in which you are vastly outnumbered by an enemy that is utterly relentless – attacking you is all it does. The intro to another Terminator movie? No, just another day for microbes such as bacteria and archaea, which face a never-ending onslaught from viruses and invading strands of nucleic acid known as plasmids.

To survive this onslaught, microbes deploy a variety of defense mechanisms, including an adaptive-type nucleic acid-based immune system that revolves around a genetic element known as CRISPR, which stands for Clustered Regularly Interspaced Short Palindromic Repeats. 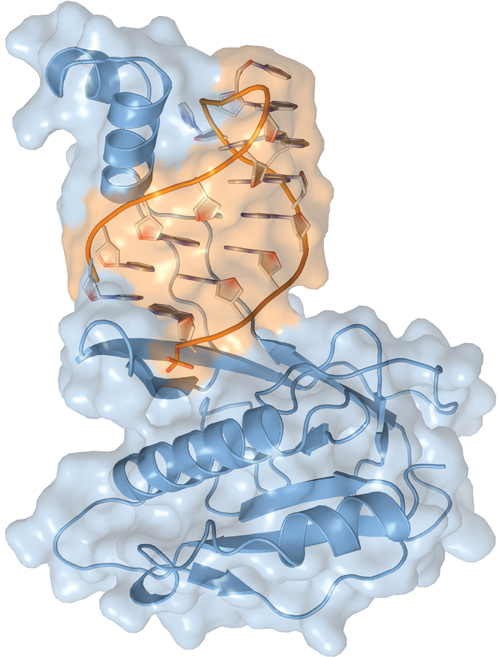 About the image: The crystal structure of the Csy4 enzyme (blue) bound to a crRNA molecule (orange). The crRNA contains nucletotide sequences that match those of foreign DNA from a virus or plasmid, enabling it to target and silence the invaders. Image credit: Image courtesy of the Doudna group

Through the combination of CRISPR and squads of CRISPR-associated – “Cas” – proteins, microbes are able to utilize small customized RNA molecules to silence critical portions of an invader’s genetic message and acquire immunity from similar invasions in the future. To better understand how this microbial immune system works, scientists have needed to know more about how CRISPR’s customized small RNA molecules get produced. Answers have now been provided by a team of researchers with the Lawrence Berkeley National Laboratory (Berkeley Lab) and the University of California (UC) Berkeley.

In a study led by biochemist Jennifer Doudna, the  research team used protein crystallography beamlines at Berkeley Lab’s Advanced Light Source to produce an atomic-scale crystal structure model of an endoribonuclease called “Csy4.” Doudna and her colleagues have identified Csy4 as the enzyme in prokaryotes that initiates the production of CRISPR-derived RNAs (crRNAs), the small RNA molecules that target and silence invading viruses and plasmids.

“Our model reveals that Csy4 and related endoribonucleases from the same CRISPR/Cas subfamily utilize an exquisite recognition mechanism to discriminate crRNAs from other cellular RNAs to ensure the selective production of crRNA for acquired immunity in bacteria,” Doudna says. “We also found functional similarities between the RNA recognition mechanisms in Cys4 and Dicer, the enzyme that plays a critical role in eukaryotic RNA interference.”

Doudna is a leading authority on RNA molecular structures who holds joint appointments with Berkeley Lab’s Physical Biosciences Division and UC Berkeley’s Department of Molecular and Cell Biology and Department of Chemistry. She is also an investigator with the Howard Hughes Medical Institute (HHMI). The results of this latest research on CRISPR are reported in the journal Science in a paper titled “Sequence- and structure-specific RNA processing by a CRISPR endonuclease.” Co-authoring the paper with Doudna were Rachel Haurwitz, Martin Jinek, Blake Wiedenheft and Kaihong Zhou.

CRISPR is a unit of DNA, usually on a microbe’s chromosome, made up of “repeat” elements, base-pair sequences ranging from 30 to 60 nucleotides in length, separated by “spacer” elements, variable sequences that are also from 30 to 60 nucleotides in length. CRISPR units are found in about 40-percent of all bacteria whose genomes have been sequenced, and about 90-percent of archaea. A microbe might have several CRISPR loci within its genome and each locus might contain between four and 100 CRISPR repeat-spacer units. Doudna and her colleagues studied CRISPR in Pseudomonas aeruginosa, a common bacterium that is ubiquitous in the environment.

Rachel Haurwitz, a graduate student in Doudna’s research group and the first author on the Science paper, explains how the CRISPR/Cas immunity system works.

“When a bacterium recognizes that it has been invaded by a virus or a plasmid, it incorporates a small piece of the foreign DNA into one of its CRISPR units as a new spacer sequence. The CRISPR unit is then transcribed as a long RNA segment called the pre-crRNA. The Csy4 enzyme cleaves this pre-crRNA within each repeat element to create crRNAs about 60 nucleotides long that will contain sequences which match portions of the foreign DNA. Cas proteins will use these matching sequences to bind the crRNA to the invading virus or plasmid and silence it.”

Haurwitz says the CRISPR/cas system for silencing foreign DNA in prokaryotes is analogous to the way in which short interfering or siRNAs correct genetic problems in eukaryotes. Over time, the CRISPR/cas system will build up inheritable DNA-encoded immunity from future invasions by the same types of viruses and plasmids. 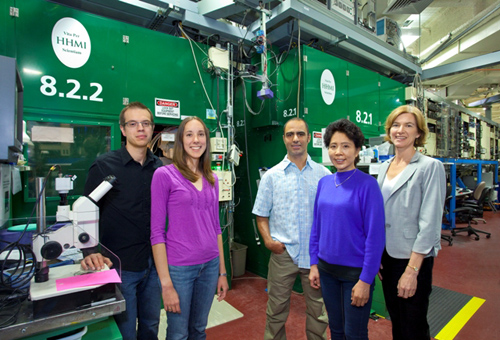 With their crystal structure model of the Csy4 enzyme bound to its cognate RNA, which features a resolution of 1.8 Angstroms, the Berkeley CRISPR research team has shown that Csy4 makes sequence-specific interactions in the major groove of the CRISPR RNA repeat stem-loop. Together with electrostatic contacts to the phosphate backbone, these interactions enable Csy4 to selectively bind to and cleave pre-crRNAs using phylogenetically conserved residues of the amino acids serine and histidine in the active site.

“Our model explains sequence- and structure-specific processing by a large family of CRISPR-specific endoribonucleases,” Doudna says.

Doudna and her colleagues produced their 1.8 Angstrom resolution crystallographic structure using the experimental end stations of Beamlines 8.2.1 and 8.3.1 at Berkeley Lab’s Advanced Light Source (ALS). Both beamlines are powered by superconducting bending magnets – “superbends” – and both feature state-of-the-art multiple-wavelength anomalous diffraction (MAD) and macromolecular crystallography (MX) capabilities. Beamline 8.2.1 is part of the suite of protein crystallography beamlines that comprise the Berkeley Center for Structural Biology.

“The ALS and its protein crystallography beamlines continue to be a critical resource for our research, ” Doudna says.

The crRNAs used by the CRISPR/cas system for the targeted interference of foreign DNA join the growing ranks of small RNA molecules that mediate a variety of processes in both eukaryotes and prokaryotes. Understanding how these small RNA molecules work can improve our basic understanding of cell biology and provide important clues to the fundamental role of RNA in the evolution of life.

Says Doudna, “By investigating how bacteria produce and use small RNAs for selective gene targeting, we hope to gain insight into the fundamental features of the pathways that have proven evolutionarily useful for genetic control, both in the bacterial world and in the world of eukaryotes. Right now it looks like bacteria and eukaryotes have evolved entirely distinct pathways by which RNAs are used for gene regulation and that is pretty amazing!”

This work was supported in part by grants from the National Science Foundation and from the Bill and Melinda Gates Foundation.