Main Climate Threat from CO2 Sources Yet to Be Built

Stanford, CA — Scientists have warned that avoiding dangerous climate change this century will require steep cuts in carbon dioxide emissions. New energy-efficient or carbon-free technologies can help, but what about the power plants, cars, trucks, and other fossil-fuel-burning devices already in operation? Unless forced into early retirement, they will emit carbon dioxide into the atmosphere for decades to come. Will their emissions push carbon dioxide levels beyond prescribed limits, regardless of what we build next? Is there already too much inertia in the system to curb climate change?

Not just yet, say scientists Steven Davis and Ken Caldeira of the Carnegie Institution’s Department of Global Ecology. But to avoid the worst impacts we need to get busy building the next generation of clean energy technologies.

Davis and Caldeira, with colleague Damon Matthews of Concordia University in Montreal, calculated the amount of carbon dioxide expected to be released from existing energy infrastructure worldwide, and then used a global climate model to project its effect on the Earth’s atmosphere and climate.“The problem of climate change has tremendous inertia,” says Davis. “Some of this inertia relates to the natural carbon cycle, but there is also inertia in the manmade infrastructure that emits CO2 and other greenhouse gases. We asked a hypothetical question: what if we never built another CO2-emitting device, but the ones already in existence lived out their normal lives?” 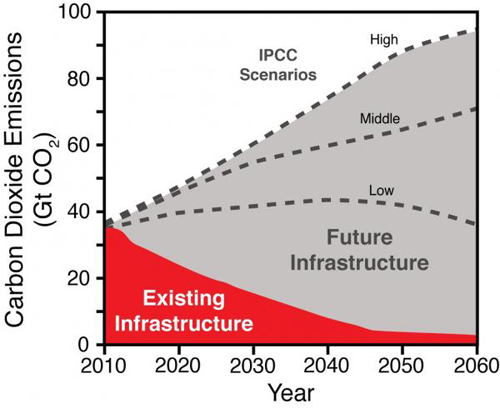 About the image: Graph shows projected decline of carbon dioxide emissions in gigatons (billions of tons) from existing energy and transportation infrastructure (red wedge) over the next 50 years, compared to three emissions scenarios (dotted lines) from the Special Report on Emissions Scenarios (SRES) Intergovernmental Panel on Climate Change (IPCC). High, middle, and low emissions projections correspond to the SRES A1G-FI, A2, and B1 scenarios, respectively. Image credit: Carnegie Institution for Science

For a coal-fired power plant a “normal life” is about 40 years.For a late-model passenger vehicle in the United States it is about 17 years. After compiling data on lifetimes and emissions rates for the full range of fossil-fuel burning devices worldwide, the researchers found that that between the years 2010 to 2060 the total projected emissions would amount to about 500 billion tons of carbon dioxide added to the atmosphere. To gauge the impact, they turned to the climate model. The researchers found that atmospheric concentrations of CO2 would stabilize at less than 430 parts per million (ppm) and the increase of global mean temperatures since preindustrial time would be less than 1.3°C (2.3°F).

“The answer surprised us,” says Davis. “Going into this study, we thought that existing sources of CO2 emissions would be enough to push us beyond 450 ppm and 2°C warming.” In light of common benchmarks of 450 ppm and 2°C, these results indicate that the devices whose emissions will cause the worst impacts have yet to be built.

But the authors caution that while existing infrastructure is less of a threat to climate than they had expected, this does not minimize the threat of future emissions. “Because most of the threat from climate change will come from energy infrastructure we have yet to build, it is critically important that we build the right stuff now – that is, low carbon emission energy technologies,” says Caldeira. He adds that other factors besides devices that directly emit carbon dioxide might also contribute to the system’s inertia. “We have a gas station infrastructure but not a battery recharging infrastructure,” he says. “This makes it easier to sell new gasoline powered cars than new electric cars. Thus there are infrastructural commitments that go beyond our calculation of future CO2 emissions embodied in existing devices.”

“In our earlier work we found that every increment of carbon dioxide emission produces another increment of warming,” says Caldeira. “We cannot be complacent just because we haven’t yet reached a point of no return.”