Scientists have discovered that marine diatoms, tiny phytoplankton abundant in the sea, have an animal-like urea cycle, and that this cycle enables the diatoms to efficiently use carbon and nitrogen from their environment.

The researchers, from the J. Craig Venter Institute (JCVI) and other institutions, published their findings in this week’s issue of the journal Nature.

The team, led by lead author Andrew Allen from JCVI and co-author Chris Bowler, Institute of Biology, Ecole Normale Supérieure, Paris, believes that the cycle could be a reason for the domination of diatoms in marine environments, especially after upwelling events–the upward movement of nutrient rich waters from the deep ocean to the surface.

In response to ocean upwelling, diatoms are able to quickly recover from prolonged periods of nutrient deprivation and rapidly proliferate.

“This study provides fascinating insights into how diatoms have evolved to become the dominant primary producers in many ocean regions,” says David Garrison, program director in the National Science Foundation’s (NSF) Division of Ocean Sciences, which funded the research along with NSF’s Division of Molecular and Cellular Biosciences.

Diatoms have unique cell walls made of silica. They are key organisms for understanding the environmental health of marine ecosystems, and are responsible for much of the carbon and oxygen production in the ocean. 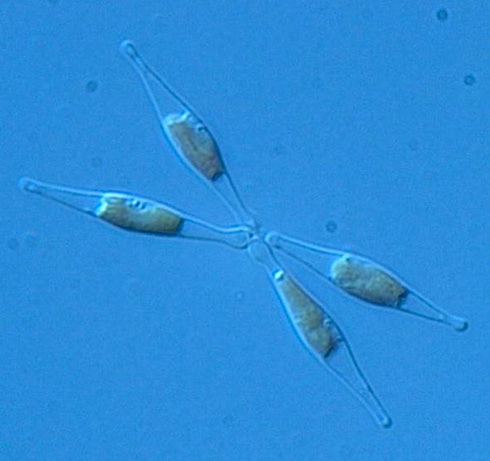 Diatom photosynthesis in ocean environments is also responsible for about one fifth of the oxygen in the atmosphere.

In that research, they developed new methods for determining the origin of diatom genes. They also looked at nutrient metabolism in diatoms, beginning with iron metabolism.

Building on that work, Allen and colleagues explored the evolutionary history of diatoms, specifically P. tricornutum, and cellular mechanisms for nutrient utilization in the environment, leading to the finding that diatoms have a functional urea cycle.

This was a stunning discovery, says Allen, because it was thought that the urea cycle originated with the metazoan (animal) branch of life. 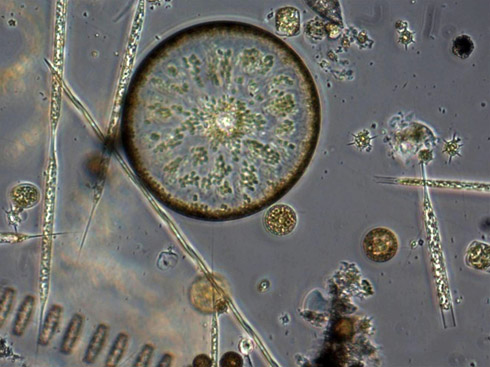 There it has played an important role in facilitating a wide range of physiological innovations in vertebrates.

For example, urea synthesis enables rapid control of minerals and salts in the blood in animals such as sharks, skates, rays and bony fish, and ammonia detoxification associated with water retention in amphibians and mammals.

The latter was likely a prerequisite for life on land, and subsequently enabled the biochemical pathways necessary for processing a high-protein diet.

Allen and others have now shown that the urea cycle originated hundreds of millions of years before the appearance of metazoans. 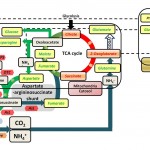 Paper co-author Alisdair Fernie of the Max-Planck Institute of Molecular Plant Physiology evaluated the metabolite profile of diatoms with and without an impaired urea cycle.

Then Allen analyzed the data and found that urea cycle metabolites are critical for cellular recycling of carbon and nitrogen.

The metabolites are also important for facilitating the rapid onset of exponential growth characteristic of diatom recovery from nutrient starvation.

“It appears that the animal urea cycle, critical for cellular export of carbon and nitrogen wastes, was co-opted from an ancestral pathway that originally evolved as a nitrogen and carbon recycling and recovery mechanism,” says Allen.

“This is a very interesting finding we didn’t expect to see, and essentially changes the way we view diatoms relative to animals and plants.”

This relatedness has resulted in diatoms and animals sharing some similar biochemical pathways such as the urea cycle.

Along with Allen, Bowler, Fernie and other colleagues from JCVI, Ecole Normale Supérieure, and Max-Planck Institute, Germany, researchers from the Biology Centre ASCR, the Institute of Parasitology and University of South Bohemia, Czech Republic; the University Federal de Viçosa, Brazil; and the Institute of Hydrobiology, Chinese Academy of Sciences, China, contributed to this work.

The research was also funded by the JCVI, the European Commission on Diatomics Project, the Agence Nationale de la Recherche in France, and the Czech Science Foundation.