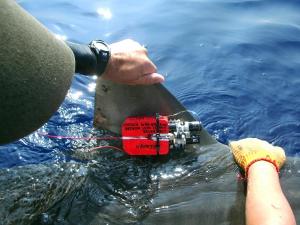 Accelerometer attached to the dorsal fin of a tiger shark. Image credit: C.Meyer

Tiger sharks are cosmopolitan predators which consume a wide variety of prey, and have large home ranges, moving hundreds of kilometers between oceanic islands and far out into open ocean to fill their resource needs. Scientists equipped four tiger sharks with high-resolution accelerometers (devices that record swimming speed, depth, temperature and acceleration) and digital still cameras to obtain the most detailed view to date of tiger shark swimming behavior. These methods allowed researchers to determine what tiger sharks were doing during vertical movements.

Many open ocean fishes and sharks exhibit ‘yo-yo’ swimming patterns (repeatedly climbing and diving through the water while swimming), and scientists hypothesize this behavior might be linked to energy conservation, hunting or navigation. Previous studies showed tiger sharks also engage in yo-yo diving behavior but the reasons were unclear. 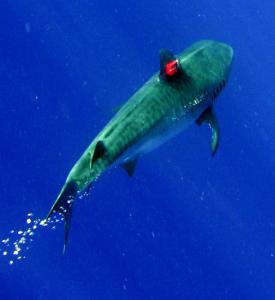 This new research links swimming events to capture of prey during vertical movements. The accelerometers revealed tiger sharks beat their tails almost continually as they moved up and down through the water, and rarely glided downwards, suggesting energy conservation is not the primary reason for yo-yo diving in this species. Camera images showed tiger sharks frequently encountering a variety of potential prey items such as reef and pelagic (deep-water) fishes, with prey fish observed in over 151 images from just one shark alone.  One of the monitored sharks was shown to accelerate from the seabed towards a school of fish, and remained with this school for over 20 minutes. Bursts of swimming associated with other images of reef fishes indicate possible prey pursuit; one picture from the camera suggests the possible capture of a unicornfish.

“These findings are exciting because they have given us unprecedented new insights into the behavior of these huge and difficult to study marine predators,” explains Dr. Carl Meyer, a researcher at HIMB and the lead U.S. scientist of the project. Meyer also emphasizes the importance of these results “although we have long debated the reasons for the yo-yo diving, we have only recently developed tools allowing us to directly measure the behavior in sufficient detail to understand what these animals are actually doing”.

This research has shed new light on hunting behaviors by demonstrating that tiger shark yo-yo diving behavior is not primarily an energy conservation strategy, but a search strategy that effectively combs large three-dimensional spaces for prey.