For the first time, scientists have mapped the genome–the genetic code–of orangutans. This new tool may be used to support efforts to maintain the genetic diversity of captive and wild orangutans. The new map of the orangutan genome may also be used to help improve our understanding of the evolution of primates, including humans.

Partially funded by the National Science Foundation, the orangutan study appears in the Jan. 27 issue of Nature. It was conducted by an international team of scientists led by Devin P. Locke of the Genome Center at Washington University.

The name “orangutan” is derived from the Malay term, “man of the forest,” a fitting moniker for one of our closest relatives. 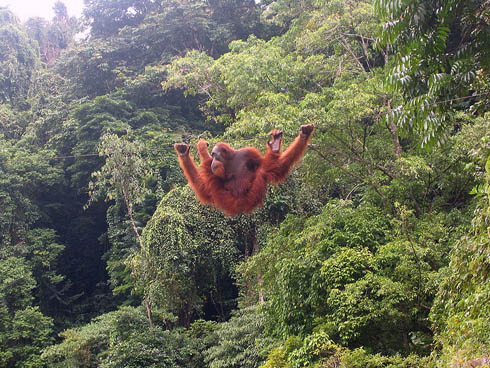 The endangerment status of orangutans is determined by the International Union for Conservation of Nature.

Using a mix of legacy and novel technologies, the research team mapped the genomes of a total of 11 orangutans, including representatives of both the Sumatran and Bornean species.

After scientists map a species’ genome, they compare it to the genetic maps of other species. As they do so, they search for key differences that involve duplications, deletions and inversions of genetic material. These differences may contribute to the unique features of particular species. They may also provide information about general evolutionary trends, such as the overall rate at which genomic evolution has occurred.

Before the orangutan’s genome was mapped, the genetic codes of three other great primates–humans, chimpanzees and rhesus macaques–were mapped.

The genomes of the gorilla and bonobo will soon be mapped, as well.

Analyses of the orangutan genome reveal that this primate has many unique features. For example, comparisons of the structural variation of the genomes of orangutans, humans, chimpanzees and rhesus macaques indicate that during the last 15 million years or so of primate evolution, the orangutan genome has generally been more stable than those of the other primates, with fewer large-scale structural changes.

The orangutan genome also allowed for an analysis of fast-evolving genes, which are likely to have responded to evolutionary pressure for adaptation. Genes related to visual perception and metabolic processes were found to evolve unusually rapidly in orangutans and other primates. The orangutan’s metabolism-related genes were also found to have evolved rapidly–a phenomenon that may be related to the organgutan’s slow growth rate, slow reproduction rate, and long inter-birth interval, the period between successive births. Organutans give birth not more than once every six to eight years, an inter-birth interval rated as the longest among mammals, including humans.

Comparisons of the population genetics of the Sumatran and Bornean species indicate that these species split approximately 400,000 years ago, which is more recent than previously believed. In addition, Sumatran orangutans have greater genetic diversity than their Bornean counterparts, despite their smaller population size and higher endangered status.

Adam Siepel, a research team member from Cornell University described the new map of the genetic code of orangutans as an important step in genome sequencing of primates. “The orangutan genome gives us a much more complete picture of genome evolution in the great apes,” he said.

“This is a terrific example of the application of genome sequencing beyond model organisms–well-studied organism like the mouse and fruit fly,” said Reed Beaman, an NSF program director. “Research like this has only recently become possible through a dramatic decrease in the cost of sequencing. These results demonstrate broad significance to biogeography, genetics, as well as to conservation and human evolution, and they are only starting to scratch the surface.”