Beneath the 20-foot waves that crested off Delaware’s coast during Hurricane Sandy, thrashing waters reshaped the floor of the ocean, churning up fine sand and digging deep ripples into the seabed. Fish, crustaceans and other marine life were blasted with sand as the storm sculpted new surfaces underwater.

UD scientists cued up their instruments to document the offshore conditions before, during and after Sandy’s arrival to scrutinize the differences and better predict the environmental impact of future storms.

“Out here, we’re trying to get the fingerprint of the storm,” said Arthur Trembanis, associate professor of geological sciences and oceanography, aboard the research vessel Hugh R. Sharp. 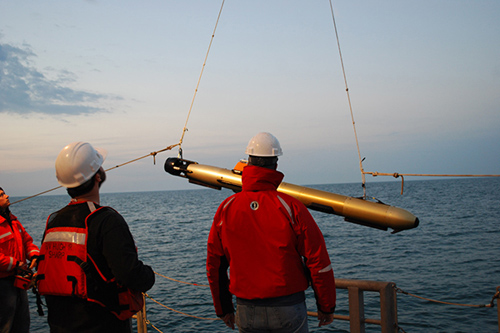 Scientists used an AUV to map the seafloor at the Redbird Reef site off the coast of the Indian River Inlet. Photo by Teresa Messmore

Trembanis and his colleagues focused in on Redbird Reef, an artificial reef about 16 miles off the coast of the Indian River Inlet. The site contains old subway cars, boats and truck tires sunk over the past decade to provide habitat for sea creatures. The scientists have been studying the reef in recent years, among other “hard bottom” sites in this otherwise barren, sandy region, to examine the ecosystem found there and create detailed maps of the seafloor.

Besides improving scientists’ understanding of the natural environment, the work has potential military applications: Shifting underwater sands and sediment can bury — or uncover — dangerous mines used to explode enemy vessels in conflict zones. Understanding how weather conditions can affect such objects on the bottom of the ocean could help the Navy, which funded this scientific cruise, identify and avoid the weapons.

In the peacetime waters off Mid-Atlantic shores, however, the manmade structures at the reef serve as research substitutes for mines. Two days before Hurricane Sandy hit, Trembanis’ group set up a specialized buoy at the reef with three different types of equipment attached that rested on the seafloor to measure waves, currents and sand formations on the seafloor. 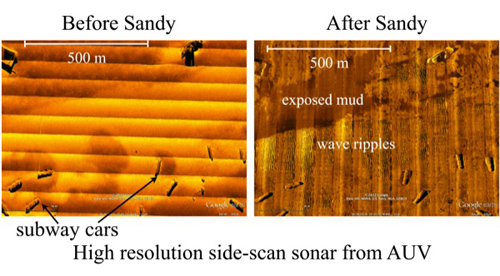 The researchers also used a multibeam sonar on the ship to generate images of the seafloor, complemented by side-scan sonar for a finer resolution images taken by an autonomous underwater vehicle (AUV) — an unmanned, torpedo-shaped machine that darts through the ocean to collect data.

“We really can build a pretty complete picture of what happened on site,” said oceanography graduate student Carter DuVal, who is basing his master’s thesis in part on the information gathered.

The team repeated the sonar runs on Nov. 10, finding newly formed sand ripples, reshaped surfaces and exposed areas, with significant patches of “scouring” where erosion occurred due to rapidly flowing water. Currents raced at more than 3 knots during the Sandy’s peak, capable of moving large stones and rotating the researchers’ underwater equipment almost 50 degrees during the storm. 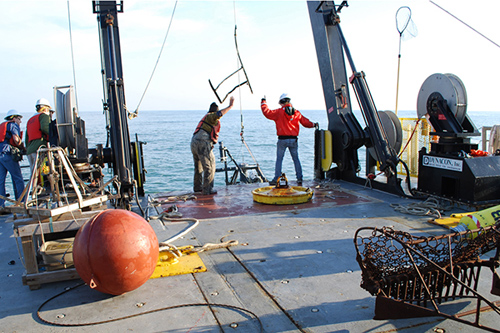 Crew aboard the R/V Hugh R. Sharp retrieve scientific instruments — and an entangled piece of metal — from the seafloor. Photo by Teresa Messmore

In analyzing the data collected, the scientists will link the geological markings on the seafloor to wave conditions and currents. Then they can develop models of how sediments move and predict whether areas might experience extensive scouring.

In addition to Navy use, the research could inform engineering decisions for offshore wind turbines, which have been considered in the vicinity of Redbird Reef.

The study is just one of several ways Trembanis tracked Sandy’s geological imprint. He also took photographs and video during an airplane flyover of the coasts of Delaware, New Jersey, Maryland and Virginia just days after the storm, recording what happened right at the land’s edge for the Program for the Study of Developed Shoreline. He and his team also surveyed Broadkill Beach with high-resolution GPS to map its shape after the storm, finding it to be much more flat than usual for this time of year. They also used sonar to generate an image of a shipwreck near Cape Henlopen, which revealed a lot of sand had been swept off the wreck site. 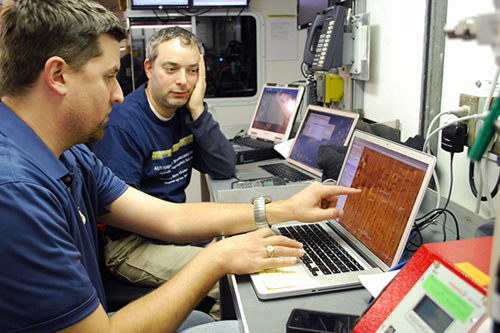 Collecting pre- and post-storm metrics through a variety of means creates a valuable dataset, Trembanis said, though it was not easy to compile. Aboard the Sharp last weekend, the team was unsure whether the buoy survived the storm, eagerly anticipating its presence as the ship headed to the site.

While it remained in place to clearly indicate where the equipment was, not all data that they hoped to collect was there: a rotary sonar scheduled to record ripples at regular time intervals malfunctioned. That information would have helped separate conditions specific to Sandy from those of the northeaster that arrived a few days later. Instead, they will have to settle for a composite of the two.

Other signs pointed to how rough the conditions were, though. As the ship’s crew raised the scientific equipment that rested on seafloor during the storm, a large piece of twisted metal arose that had been entangled in the rope — possibly a window frame from a subway car. 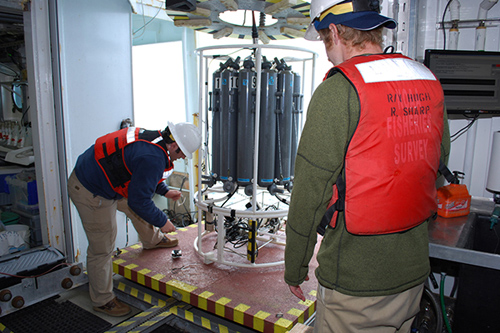 Doug Miller, associate professor of oceanography in the College of Earth, Ocean, and Environment on board to collect biological samples, worried that the sharp debris would cut the line and sink the equipment. Thankfully, it did not.

“But that was a tense moment,” Miller said. 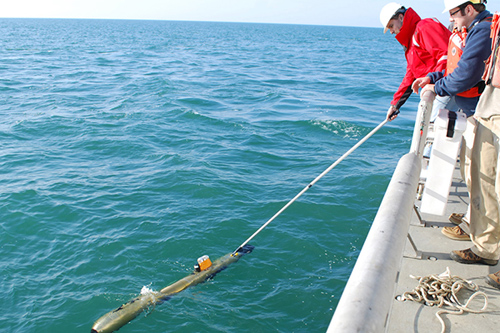