Rising Carbon Dioxide Levels at End of Last Ice Age Not Tied to Pacific Ocean, As Had Been Suspected

ANN ARBOR, Mich.— After the last ice age peaked about 18,000 years ago, levels of atmospheric carbon dioxide rose about 30 percent. Scientists believe that the additional carbon dioxide—a heat-trapping greenhouse gas—played a key role in warming the planet and melting the continental ice sheets. They have long hypothesized that the source of the gas was the deep ocean.

But a new study by a University of Michigan paleoclimatologist and two colleagues suggests that the deep ocean was not an important source of carbon during glacial times. The finding will force researchers to reassess their ideas about the fundamental mechanisms that regulate atmospheric carbon dioxide over long time scales.

“We’re going back to the drawing board. It’s certainly fair to say that we need to have some other working hypotheses at this point,” said U-M paleoclimatologist David Lund, lead author of a paper in this week’s edition of the journal Nature Geoscience. 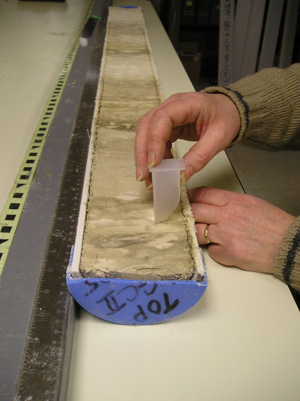 “If we can improve our understanding of the carbon cycle in the past, we will be better positioned moving forward as CO2 levels rise due to anthropogenic causes,” said Lund, an assistant professor in the U-M Department of Earth and Environmental Sciences. Lund’s co-authors are Alan Mix of Oregon State University and John Southon of the University of California, Irvine.

The study, which involved radiocarbon-dating of sediments from a core collected at a deep-ocean site (water depth 8,943 feet) off the coast of southwestern Oregon, was supported by the National Science Foundation and the University of Michigan.

The work involved radiocarbon dating dozens of sediment samples that contained microscopic shells created by plankton. The samples were collected from various locations in the core, spanning the period from 8,000 to 22,000 years ago. Over thousands of years, ocean water circulates from the surface to the bottom, then back to the surface. The radiocarbon results revealed the basin’s circulation or “ventilation” rate, the amount of time that had passed since the various deep-water samples were last in contact with the atmosphere.

The scientists expected to find that the ventilation rate in the basin slowed during glacial times, allowing carbon dioxide to accumulate in the abyss and depleting atmospheric levels of the gas.

“Frankly, we’re kind of baffled by the whole thing,” said Oregon State University paleo-oceanographer Alan Mix, one of the co-authors. “The North Pacific was such an obvious source for the carbon, but it just doesn’t match up.”

“At least we’ve shown where the carbon wasn’t,” Mix said. “Now we just have to find where it was.”