Charles P. Sonett: the Legacy of a Pioneering Space Scientist

*Charles P. Sonett, the first head of the UA’s department of planetary sciences, died at the age of 87. Sonett was involved in spacecraft missions that dramatically advanced our understanding of the solar system and beyond, including the Pioneer Program, the Explorer Program and the Apollo Program.*

Charles “Chuck” P. Sonett, a founding faculty member and the first department head of the University of Arizona’s department of planetary sciences, died on Sept. 30. He was 87.

As a space exploration pioneer, Sonett was involved in numerous spacecraft programs, including the Pioneer Program, the Explorer Program and the Apollo Program – missions that dramatically advanced our understanding of the solar system, its planets and moons and beyond. 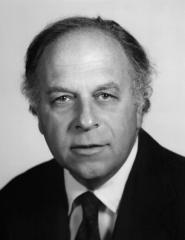 In 1973, Gerard P. Kuiper (1903-73), widely considered to be the father of modern planetary astronomy, invited Sonett to be his successor as director of the UA’s Lunar and Planetary Laboratory, or LPL, and to head the new interdisciplinary department of planetary sciences, chartered that year by the Arizona Board of Regents.

During his term as the second LPL director and first planetary sciences department head (1973-77), Sonett presided over a dramatic expansion. He built research and education programs in solar system science that became internationally recognized. In 1992, Sonett was named a Regents’ Professor, the highest academic rank at the UA. Sonett retired in 2003 as a Regents’ Professor Emeritus.

Mysteries of the moon

As principal investigator of the Ames Magnetic Fields Explorer on the Explorer Program, which still has many missions in operation, Sonett studied interplanetary space from lunar orbit and discovered that the moon – unlike the Earth and some of the other planets and moons – has no magnetosphere to deflect the stream of charged particles emanating from the sun called the solar wind. Sonett discovered that the moon creates a “cavity” in the solar wind, which showers down onto its surface.

During the post-Apollo era, Sonett played an important role in analyzing spacecraft data to understand the moon’s interior through the use of magnetic field measurements at the moon’s surface and from orbit. A major goal was to understand whether the moon had a metallic core analogous to the Earth’s. Sonett led the Lunar Surface Magnetometer project as part of the Apollo Program. Results of these experiments indicated significant variations in the strength of the moon’s magnetic field on both local and regional scales.

The culmination of this work at the UA during the late 1970s and early 1980s led to a firm upper bound of about 400 km for the radius of a highly electrically conducting metallic core in the moon, proving a major dissimilarity of the moon to the Earth. Sonett’s result is consistent with current estimates for the lunar core radius (about 330 to 350 km based on a variety of geophysical measurements).

“Those were perhaps his most important discoveries, but he was also very interested in the science coming from spacecraft missions,” said J. Randy Jokipii, a Regents’ Professor of Astrophysics and Space Physics and longtime colleague of Sonett’s in the UA’s department of planetary sciences.

“Sonett also was one of the first to study shock waves in interplanetary space,” Jokipii said. “Chuck was especially interested in cyclic behavior of the sun and measurements of those phenomena. For example, he used sedimentary deposits on Earth to study how the sun’s cycle affected global climate.”

In the 1960s, Sonett was among the first who studied and confirmed the existence of interplanetary shockwaves, which had been postulated but not been proved to exist at the time.

“Those shockwaves are similar in principle to a sonic boom from an aircraft, which is a sudden change in temperature and pressure, caused by solar wind sweeping through those thin clouds of gas,” Jokipii explained. “Because the gas molecules are very sparsely distributed, many didn’t believe they posed enough of an obstacle in the solar wind to result in a shock wave. But Chuck was one of the first to observe the shock waves resulting from those collisions.”

“I remember that in an attempt to visualize the concept, Chuck made an amazing model the scientific concept. It was made from wood and pieces of metal and it sat on his desk.”

An early passion for telescopes

Sonett was born Jan. 15, 1924 in Pittsburgh of Hungarian parents. When he was young, his family moved to the desert town of Trona, Calif., some 40 miles from Death Valley. There, he became interested in geology and astronomy.

He attended Hollywood High School in Los Angeles, where his interest in astronomy led him to telescope construction projects, including the figuring of mirror optics. As a youth he joined the Los Angeles Amateur Astronomical Society and discovered the works of American astronomer George Willis Ritchey, French astronomer Henri Jacques Chrétien (Ritchey-Chrétien telescope) and Estonian optician Bernhard Schmidt (Schmidt telescope), all of whom had made improvements in telescope optics.

Sonett began to construct a 10-inch aperture telescope according to a design by famed astrophysicist Karl Schwarzschild. He was also active in his high school Reserve Officers Training Corps program, rising to the rank of cadet corporal.

After graduation from high school, Sonett entered UCLA, majoring in physics. The Japanese bombing of Pearl Harbor in 1941 interrupted his studies. He enlisted in the Army on Oct. 26, 1942, finished his second year at UCLA, and entered active duty on May 12, 1943. He was inducted into the U.S. Army Signal Corps at Camp Kohler and then became a cadet in the U.S. Army Air Forces training program. However, his unit was disbanded and he was assigned to the 103d Infantry Division, 410th Infantry Regiment, 3d Battalion, Company K. On March 13, 1945, while on combat patrol in France near Uhrwiller in Alsace, Sonett stepped on a German mine. His wounds required a battlefield amputation of his left leg. Sonett’s military decorations include the Combat Infantryman’s Badge, Bronze Star, and Purple Heart.

After leaving service, Sonett returned to UCLA to continue undergraduate work in physics. He then transferred to the University of California, Berkeley, where he graduated in 1948. In June of that year, he married Virginia Louise Hooten, also a graduate of UC Berkeley. His first employment was with the Naval Radiological Defense Laboratory at Hunters Point, San Francisco, working in satellite planning. After one year, he returned to UCLA where he received his master of arts in 1951 and doctorate in 1954.

Following his graduation, Sonett’s interest shifted from nuclear physics to rocketry and its application to exploration of the solar system. This change in interest coincided with the launch of Sputnik and the beginning of the “Space Race.”

Sonett began employment with Ramo-Wooldridge Corp., Space Technology Laboratories division. Sonett was subsequently employed at NASA Headquarters in Washington, D.C., where from 1960-62 he was NASA’s Chief of Sciences, Lunar and Planetary Programs.

In 1962, Sonett became head of the Space Sciences Division at NASA Ames Research Center, where he oversaw research for the nation’s space program in the areas of geophysics, interplanetary and planetary physics, planetary sciences, astronomy, and astrophysics. He remained at Ames for 11 years; during that time he was principal investigator on Explorer 33 and 35, Lunar Orbiter Magnetometer Experiment.

In 1969, Sonett received NASA’s Exceptional Scientific Achievement Medal for unusually significant scientific contribution toward achievement of aeronautical or space exploration goals. Most recently, Sonett was involved in the Ulysses Program, a joint ESA/NASA mission and the first to survey of the Sun’s environment in space from its equator to the poles and over a wide range of solar activity conditions.

On April 30, 2004, the UA dedicated the Dr. Charles P. Sonett Space Sciences Building, which houses around 45 scientists and support staff.

At the building’s dedication, the late Michael J. Drake, who was LPL’s director at the time, stated, “Bringing Sonett to UA was one of Gerard Kuiper’s best moves. Chuck understood the breadth of what planetary sciences would become, and why it was important to hire first-rate people. He laid the roots of the modern lab – and what has become the best planetary sciences department in the world.”

“He had a great vision and his work as a scientist set standards that still stand today.”