How the Brain Makes Memories: Rhythmically!

The brain learns through changes in the strength of its synapses — the connections between neurons — in response to stimuli.

Now, in a discovery that challenges conventional wisdom on the brain mechanisms of learning, UCLA neuro-physicists have found there is an optimal brain “rhythm,” or frequency, for changing synaptic strength. And further, like stations on a radio dial, each synapse is tuned to a different optimal frequency for learning.

The findings, which provide a grand-unified theory of the mechanisms that underlie learning in the brain, may lead to possible new therapies for treating learning disabilities.

The study appears in the current issue of the journal Frontiers in Computational Neuroscience. 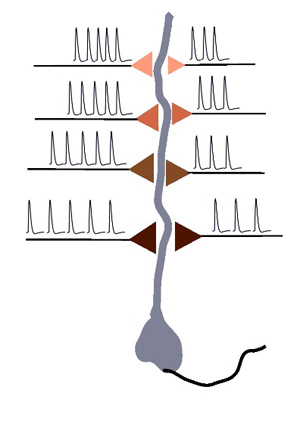 The image shows a neuron with a tree trunk-like dendrite. Each triangular shape touching the dendrite represents a synapse, where inputs from other neurons, called spikes, arrive (the squiggly shapes). Synapses that are further away on the dendritic tree from the cell body require a higher spike frequency (spikes that come closer together in time) and spikes that arrive with perfect timing to generate maximal learning. Image credit: University of California

“Many people have learning and memory disorders, and beyond that group, most of us are not Einstein or Mozart,” said Mayank R. Mehta, the paper’s senior author and an associate professor in UCLA’s departments of neurology, neurobiology, physics and astronomy. “Our work suggests that some problems with learning and memory are caused by synapses not being tuned to the right frequency.”

A change in the strength of a synapse in response to stimuli — known as synaptic plasticity — is induced through so-called “spike trains,” series of neural signals that occur with varying frequency and timing. Previous experiments demonstrated that stimulating neurons at a very high frequency (e.g., 100 spikes per second) strengthened the connecting synapse, while low-frequency stimulation (e.g., one spike per second) reduced synaptic strength.

These earlier experiments used hundreds of consecutive spikes in the very high-frequency range to induce plasticity. Yet when the brain is activated during real-life behavioral tasks, neurons fire only about 10 consecutive spikes, not several hundred. And they do so at a much lower frequency — typically in the 50 spikes-per-second range.

Until now, researchers had been unable to conduct experiments that simulated more naturally occurring levels. But Mehta and co-author Arvind Kumar, a former postdoctoral fellow in his lab, were able to obtain these measurements for the first time using a sophisticated mathematical model they developed and validated with experimental data.

Contrary to what was previously assumed, Mehta and Kumar found that when it comes to stimulating synapses with naturally occurring spike patterns, stimulating the neurons at the highest frequencies was not the best way to increase synaptic strength.

When, for example, a synapse was stimulated with just 10 spikes at a frequency of 30 spikes per second, it induced a far greater increase in strength than stimulating that synapse with 10 spikes at 100 times per second. 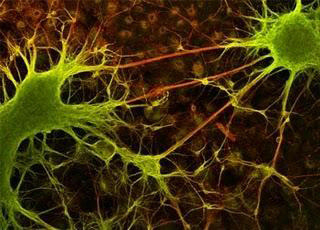 Synapse in the brain. Image credit: University of California

The knowledge that a synapse has a preferred frequency for maximal learning led the researchers to compare optimal frequencies based on the location of the synapse on a neuron. Neurons are shaped like trees, with the nucleus being the base of the tree, the dendrites resembling the extensive branches and the synapses resembling the leaves on those branches.

“Incredibly, when it comes to learning, the neuron behaves like a giant antenna, with different branches of dendrites tuned to different frequencies for maximal learning,” Mehta said.

The researchers found that not only does each synapse have a preferred frequency for achieving optimal learning, but for the best effect, the frequency needs to be perfectly rhythmic — timed at exact intervals. Even at the optimal frequency, if the rhythm was thrown off, synaptic learning was substantially diminished.

This learning-induced “detuning” process has important implications for treating disorders related to forgetting, such as post-traumatic stress disorder, the researchers said.

Although much more research is needed, the findings raise the possibility that drugs could be developed to “retune” the brain rhythms of people with learning or memory disorders, or that many more of us could become Einstein or Mozart if the optimal brain rhythm was delivered to each synapse.

“We already know there are drugs and electrical stimuli that can alter brain rhythms,” Mehta said. “Our findings suggest that we can use these tools to deliver the optimal brain rhythm to targeted connections to enhance learning.”

The publication and related materials can be found at www.physics.ucla.edu/~mayank/.