Choosing Microsoft Over the NFL

*Albert Rocker found himself at a crossroads of two big dreams: The Georgia Tech athlete had to choose between playing a final year of college football for a shot at the National Football League, or accepting a job offer from “the biggest software company ever created.”*

REDMOND, Wash. – It was the toughest decision of Albert Rocker’s life: should he pursue a career in the National Football League (NFL), or one at Microsoft?

At the Georgia Institute of Technology, Rocker was an outside linebacker for the Yellow Jackets football team with one year of eligibility remaining – one last football season to woo the NFL. Rocker played in a total of 38 games over his college career, including all 13 games of his junior season in 2010 – he was set to be a starter if he returned for his last year of eligibility.

Rocker was also a driven honor roll student majoring in business management who balanced his football career with academics and internships to prepare him for the business world.

“I made up my mind when I started college that I was going to be a success in business, or go into the NFL,” Rocker says.

He treated both pursuits with tenacity and discipline, waking up at 4:30 a.m. to work out with his football team and studying until after 11 p.m. His hard work paid off, bringing him to a crossroads of choosing between two dreams.

After much thought, prayer and discussion with his family, Rocker chose to forego his last year of football eligibility and, ultimately, his NFL dreams. He graduated, moved across the country, and is now a technical account manager in Microsoft’s Irvine, Calif., office, helping customers stabilize the health of their IT infrastructure with Microsoft tools and resources. 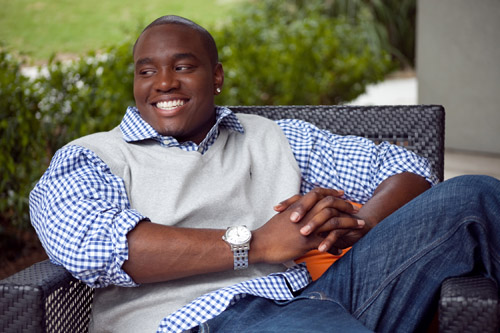 New Microsoft employee Albert Rocker had a year of college football eligibility left, but choose a career at Microsoft instead of returning to play. Image credit: Microsoft

“Your future’s not really secure in anything, but it’s a gamble as far as the NFL goes,” Rocker says. “Of course, when you’re 21 you’re eating it all up. You go out there every Saturday and win games and everybody tells you to go for the NFL. But what happens when it’s all over? I felt like I had to do what would be better for me in the long run, and even if I was drafted, I felt like Microsoft would be better for me.”

When Microsoft employee and Georgia Tech alum Irwin Dolobowsky met Rocker at a career fair on the college’s campus in late 2010, he knew the student athlete was the kind of guy who made things happen. Dolobowsky passed Rocker’s resume on to Microsoft recruiter Trish Lincoln.

Lincoln was intrigued by Rocker’s resume, which demonstrated not only his academics and business experience, but his business-like approach to his football career.

“I always keep his resume in my office – it was really unique,” she says. “He had statistics about how his team’s record had improved with him as a leader, and how he’d worked with younger players, and his training. He’d put a lot of thought into how his football experience translated into the business world. It was a very convincing argument.” 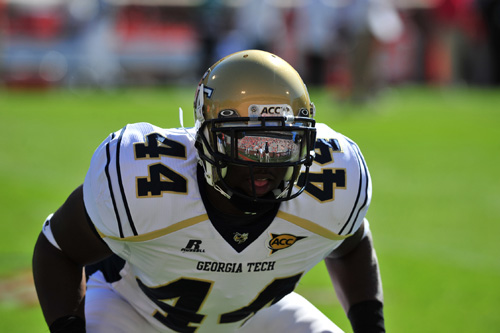 Albert Rocker played in a total of 38 games at Georgia Tech, including all 13 games of his junior season in 2010. He was set to be a starter if he’d returned this year. Image credit: Microsoft

“We established an immediate connection with our athletic backgrounds,” Dowling says. “Albert is driven. A leader, team player, and someone who hates to lose.”

Rocker has spent his first few months at Microsoft training and shadowing other technical account managers and will soon be getting his first clients.

“We’re ecstatic to have him,” Lincoln said. “He’s wonderful with people, and clients are going to be delighted to work with him. He’s creative, optimistic, and the kind of person who makes you think, ‘Wow, I can do anything.’”

Lincoln and others still marvel at how Rocker was able to distinguish himself both academically and as a player for a major college football team.

“It shows incredible balance,” Lincolns says. “He’s just so disciplined; it’s almost impossible to do both things well, not to mention at the level he did. Georgia Tech is an incredibly competitive school with some of the smartest people in the country. A 3.0 grade point average is considered honor role, and Albert was able to do that and play football.”

Rocker says he’s still getting used to living in the Los Angeles area, which is far more spread out than Atlanta – not to mention traffic heavy. He loves his new job and is soaking up all that Microsoft has to offer.

It’s been difficult, to say the least, for him to watch the Yellow Jackets on TV rather than being there with them on the field. “You never know how much you’re going to miss something until you don’t have it anymore,” he says. “It’s crazy, this is what everyone wants to do growing up – play college football, try for the NFL. You’re a celebrity. Everyone in Atlanta knows your name. You sign autographs. Now when I look at it, I think that it’s just something I did that helped make me the person I am today.”

Rocker stays in close touch with his former teammates, and even gives them advice. “Someone called me two weeks ago about a career fair on campus, asking me who he should talk to and what should he wear,” he says. “It’s cool.”

He still wakes up early to do the same workouts he did when he was playing football, sometimes even squeezing in a second workout after he leaves the office in the evening. “It’s something that your body gets addicted to and you need it to function,” Rocker explains. “After I’m done, I have all the energy in the world.”

When he works out, his mind often returns to the crowning moment of his college football career. With 12 seconds left in the 2009 Atlantic Coast Conference (ACC) Football Championship, the Yellow Jackets were ahead 39-34. In a conference with powerhouses like Florida State and Virginia Tech that consistently dominate the championship every year, it wasn’t just a championship game for Georgia Tech. It was historic.

Rocker and his teammates were staring down 12 seconds of defensive do-or-die. The sounds of 42,000 cheering fans, the music, the announcers – everything faded into the background as Rocker turned to his teammates before they took the field.

“Man, pain is only temporary,” he says “Winning lasts forever. This is one drive. We have to dig in deep, make this stop, and we’ll live the rest of our lives as champions. Not too many people can say that.”

They did make the stop, forcing the Tigers to turn the football over on downs. Georgia Tech ran down the clock and won the game – and gigantic championship rings.

“That was the most incredible experience I’ve ever had,” Rocker says. But he thinks of that moment not because he wants to go back, but to drive himself further.

“I feel like anybody can do anything, but if you want to be a success you have to work at it,” Rocker says. “It’s not like it came naturally to me, but I wanted it, and if that meant I had to work 10 times harder than anybody else, or wake up early or stay up late, I did it with the hopes that it would pay off in the end.”