Responding to the Radiation Threat

The New York Times recently reported that in the darkest moments of the triple meltdown last year of the Fukushima Daiichi nuclear power plant, Japanese officials considered the evacuation of the nearly 36 million residents of the Tokyo metropolitan area. The consideration of so drastic an action reflects the harsh fact that in the aftermath of a major radiation exposure event, such as a nuclear reactor accident or a “dirty bomb” terrorist attack, treatments for mass contamination are antiquated and very limited. The only chemical agent now available for decontamination – a compound known as DTPA – is a Cold War relic that must be administered intravenously and only partially removes some of the deadly actinides – the radioactive chemical elements spanning from actinium to lawrencium on the periodic table – that pose the greatest health threats.

Scientists at the U.S. Department of Energy (DOE)’s Lawrence Berkeley National Laboratory (Berkeley Lab) are developing a much more effective alternative that decontaminates a large number of the actinides likely to be part of the radiation exposure from a nuclear plant or weapon, including plutonium, americium, curium, uranium and neptunium. Furthermore, the Berkeley Lab treatment can be administered orally in the form of a pill, a necessity for prompt treatment in the event of mass contamination. Depending on the level of radiation exposure and how soon treatment can start, one of these pills would result in the excretion of approximately 90-percent of the actinide contaminants within 24 hours. Taking one pill daily for two weeks should be enough to remove virtually all of the actinide contaminants. 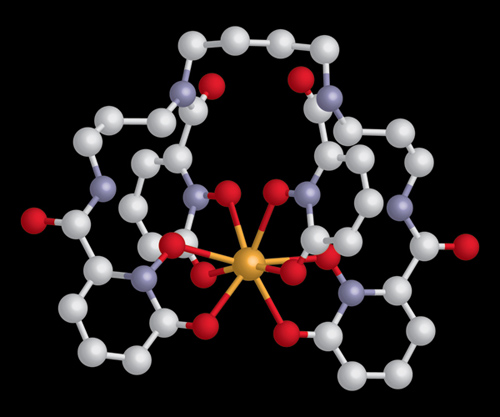 This octadentate HOPO is a sequestering agent that can encapsulate actinides, such as this plutonium atom (gold), into tightly bound cage-like complexes for excretion out of the body. (Image by Zosia Rostomian, Berkeley Lab)

“With the expanding use of nuclear power and unfortunate possibility of nuclear weapon use, there is an urgent need to develop and implement an improved therapy for actinide contamination of a large population,” says Rebecca Abergel, a chemist who leads the Bioactinide Group at Berkeley Lab’s Glenn T. Seaborg Center. “We are now in the process of demonstrating that our actinide-specific decontaminating agents are ready for clinical development.”

Once actinides are ingested or inhaled, their radioactivity and cancerous interactions with cells and tissue demand they be immobilized and removed from the body as soon as possible. Abergel and her group are part of an effort at Berkeley Lab that began more than two decades ago under the leadership of Ken Raymond, a chemist who holds joint appointments with Berkeley Lab and the University of California (UC) Berkeley, where he is the Chancellor’s Professor of Chemistry, in collaboration with the late Patricia Durbin. The primary goal of this project has been to identify sequestering agents that can encapsulate actinides into tightly bound cage-like chemical complexes for transport out of the body. The early focus of this research was on plutonium, the alpha particle-emitting actinide discovered by Berkeley Lab Nobel laureate Glenn Seaborg, and natural chelators, the crablike molecules that specifically bind with iron and other metal ions. 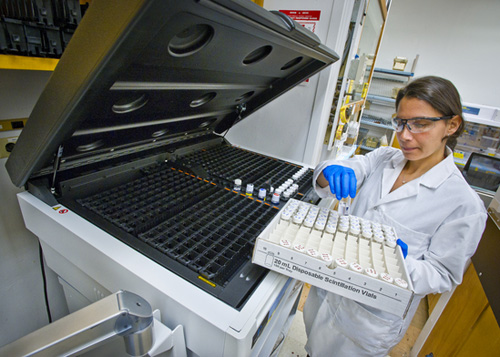 Rebecca Abergel is the leader of the Bioactinide Group at Berkeley Lab’s Glenn T. Seaborg Center, where a safe, effective radiation decontamination treatment is being developed. (Photo by Roy Kaltschmidt, Berkeley Lab)

“Since the biochemical properties of plutonium(IV) and iron(III) are similar, we modeled our sequestering agents after the chelating unit found in siderophores,” Raymond says. Siderophores are small molecules secreted by bacteria to extract and solubilize iron. “This biomimetic approach enabled us to design multidentate hydroxypyridonate ligands that are unrivaled in terms of actinide-affinity, selectivity and efficiency.” 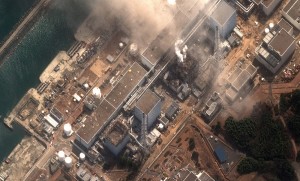 Mass contamination from major radiation exposure events, such as the meltdown at Japan’s Fukushima Daiichi nuclear power plant, require prompt treatment in the form of a pill, such as the treatment being developed at Berkeley Lab. (Satellite image from Digital Globe)

The team has also carried out extensive studies in animal models and human cell lines that established the two HOPO candidates as being highly effective and non-toxic at the tested doses. As for comparisons between the two, each has its own merits.

“A single octadentate HOPO can form a full actinide complex and results in more total actinide excretion,” Abergel says. “However, it is easier for the smaller tetradentate HOPO to pass through biological membranes and access desired target sites in the body. Both warrant further development for emergency use in the case of a radiological event.”

Abergel says the basic research and development phase of these two candidates has been completed and she and her group have started the process with the U.S. Food and Drug Administration (FDA) to determine what further data is needed to move into clinical trials. Typically at this stage of development a private pharmaceutical company would step in but it is difficult to attract private investors for a drug that will hopefully never be needed.

“As we move further along with the FDA process it should be easier to convince private pharmaceutical companies to get involved,” Abergel says.

In addition to Abergel, Raymond and Durbin, other researchers who are or have been involved in this project include Dahlia An, Kathleen Bjornstad, Eleanor Blakely, Deborah Bunin, Polly Chang, Shirley Ebbe, Erin Jarvis, Birgitta Kullgren, Chris Rosen, David Shuh, Manuel Sturzbecher-Hoehne and Jide Xu.

There have been several scientific papers published about this work with the most recent being “Multidentate terephthalamidate and hydroxypyridonate ligands: towards new orally active chelators,” in the journal Hemoglobin. It was written by Abergel and Raymond.