In the world of invasive species, the Argentine ant (Linepithema humile) is a success story. Its aggressive, territorial behavior and ability to create huge “supercolonies” – consisting of thousands of queens and millions of workers – have enabled the Argentine ant to spread across the United States, displacing native species and changing ecosystems to suit its needs. No other ant species had been seen successfully pushing back – until now. 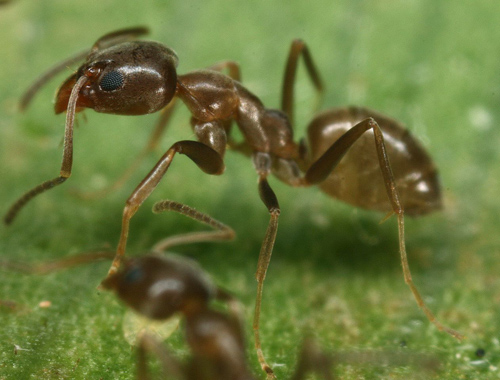 In 2008, while watching a supercolony of Argentine ants in an urban environment, former NC State Ph.D. student Dr. Eleanor Spicer Rice noticed that Asian needle ants (Pachycondyla chinensis) were living and working in the area. This was surprising because Argentine ants normally do not tolerate any other ant species in their territory, so Spicer Rice decided to investigate further.

“This is the first time we’ve seen another ant species take territory from Argentine ants,” says Spicer Rice, lead author of a paper on the research. 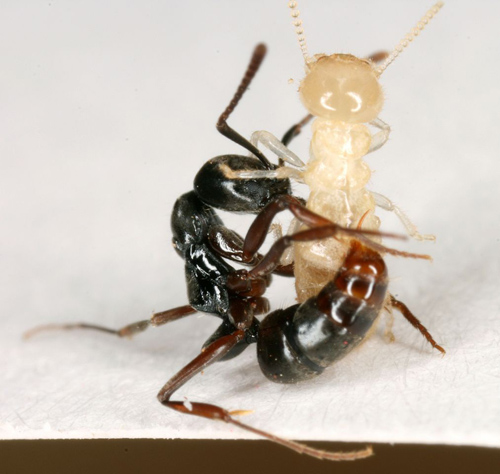 “If the Asian needle ant is effective at displacing a dominant species – and it is – then it could be the next major invasive ant species,” says Dr. Jules Silverman, a professor of entomology at NC State and co-author of the paper.

“The Asian needle ant is moving into forests and urban environments at the same time,” Spicer Rice says. “And because it is active at cooler temperatures, it could move into a very broad range of territory.” The Asian needle ant has already been found in areas ranging from Alabama to New York City to Oregon.

The paper, “Propagule pressure and climate contribute to the displacement of Linepithema humile by Pachycondyla chinensis,” was published online Feb. 8 in PLOS ONE. The research was supported by the Blanton J. Whitmire Endowment at NC State. Spicer Rice and Silverman are currently working on a paper that addresses why the Argentine ants are not attacking the Asian needle ants.

Spicer Rice and Silverman were also co-authors, along with Jonathan Shik, of a 2012 paper on how to get rid of Asian needle ant populations using toxic baits. That paper, “Effect of Scattered and Discrete Hydramethylnon Bait Placement on the Asian Needle Ant,” was published in the October issue of the Journal of Economic Entomology.