REDMOND, Wash. — March 27, 2012 — The numbers are staggering: Our planet has the largest youth population ever, with more than 1 billion people aged 15 to 24, and the figure is racing to 1.5 billion by 2035, according to “Opportunity for Action,” a new report being released today from the International Youth Foundation (IYF). The report shows that while some youths are succeeding, millions of others are not because they don’t have access to the necessary education, skills and opportunities.

Microsoft commissioned the “Opportunity for Action” report to bring attention to the urgency of the global youth opportunity divide — the gap between those who have access to a good education and the technology, skills and connections to be successful, and those who do not. No region of the world escapes the unsettling picture captured by the report. In Brazil, approximately 40 percent of firms have difficulty finding qualified staff to fill job vacancies due to low-quality education. In Asia, 70 percent of working youths are engaged in the agricultural sector, where jobs are seasonal and offer no protections or access to safety nets. And in sub-Saharan Africa, youths are grossly under-employed, leaving 72 percent of young people living on less than two dollars per day.

Being released today at a town hall discussion, “Jobs and Economy of the Future: Educating the Next Generation to Compete,” hosted by The Atlantic, the report is a call to action to address the challenges limiting the potential of today’s youths. It encourages public and private sectors to work together to better prepare young people to lead productive lives and contribute to society. 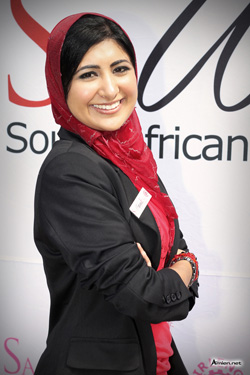 Naadiya Moosajee is an IYF board member and contributor to the afterword of the “Opportunity for Action” report being released today. Image credit: Microsoft

An example of a youth leader dedicated to answering the call to action, Naadiya Moosajee of Cape Town, South Africa, is an IYF board member and contributed to the afterword of “Opportunity for Action.”

“I think it’s vital that people take cognizance of what’s in the report,” Moosajee says. “If we don’t educate, train, skill and develop all these youth, we’re actually setting ourselves up for a disaster.”

Moosajee, 27, first became involved with IYF when she was chosen to participate in IYF’s YouthActionNet Global Leadership Fellowship in 2009. It helped her grow and develop South African Women in Engineering (SAWomEng), an organization that Moosajee co-founded in 2006 to promote the attraction, development and advancement of women in the field. “The YouthActionNet program assisted me in thinking more strategically about my organization,” she says. “It gave me the skills and tools I needed to be able to expand our program — from the way we use social media to my leadership style.”

When she began the IYF program in 2009, SAWomEng only attracted about 70 students per year. “Now after the program, we see 2,000 girls a year, and we have 81 volunteers,” Moosajee says.

Having benefited from an IYF program and now being a board member, Moosajee sees the powerful results that youth development programs can have in helping young people achieve their potential.

“The fantastic thing about being a part of IYF is to actually see change on a global level,” Moosajee says. “The programs they’re running are so diverse. They make sure youths are engaged — from skills development to gainful employment to political spheres as well.”

Monica Njau, 23, is proof that such programs can change the course of a young person’s life for the better, as reported in IYF’s YOUth magazine. 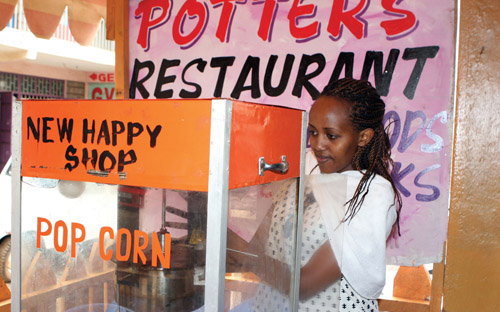 With help from the Youth Empowerment Program (YEP), Monica Njau was able to open a popcorn stand that helps pay for her education. (IYF Photo/YEP)

Njau grew up in Kasarani, one of the many slums or “informal settlements” that encircle Nairobi, Kenya. Her father was unable to keep a steady job due to his heavy drinking, while her mother has battled cancer for the past 15 years with no end to medical bills that often go unpaid. Her family’s inability to pay school fees dashed Njau’s hopes to continue her education past high school.

Njau felt discouraged — unable to move beyond seasonal low-paying and dead-end jobs. That was until one day in 2008 when she saw a flyer advertising an IT skills and business development program being offered to young women living in Nairobi’s settlement communities. She immediately enrolled in the Youth Empowerment Program (YEP), an initiative that was supported by IYF and Microsoft and implemented by local NGOs.

Since graduating from the program, Njau has launched two small startups — a small perfume business and a popcorn stand — and while the profit margins are small, they are helping her to pay for additional training to achieve her long-term goal of starting a fashion and design business. She also landed a job as a sales representative with an insurance company to help make ends meet. Perhaps most importantly to Njau, she is helping one of her sisters to pursue an education — and through her businesses has created a few badly needed jobs in the community. 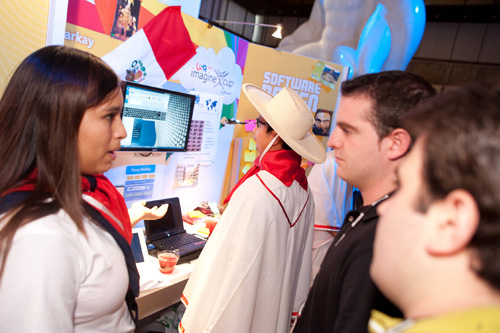 The Imagine Cup is one of Microsoft’s worldwide programs designed to engage and encourage young people. Students from the 2011 Imagine Cup worldwide finals showcase their project. Image credit: Microsoft

“I’ve been able to provide for my sisters and my family, and I’ve created jobs for my fellow youth … but we can never do it alone; we must have a helping hand,” Njau told YOUth magazine.

Microsoft is committed to being a part of offering that helping hand through building a global community of public-private partnerships dedicated to creating opportunities for youth. For the past decade, Microsoft programs have helped millions of young people worldwide create a better future for themselves. These are some of the organizations and programs Microsoft supports:

Microsoft’s “Britain Works” is addressing youth unemployment by providing technology training to more than 700,000 people in less than three years.

In Mexico, Partnership in Opportunities for Employment through Technology in the Americas (POETA) aims to support the 7.5 million Mexican youths who are neither working nor studying. With Microsoft’s support, POETA provides technology and job skills training centers for marginalized individuals through 30 centers in Mexico.

In Thailand, Microsoft is working with the Department of Skill Development of the Ministry of Labor, and the Kenan Institute to support the BETTER Project (Building Employability Through Technology and Entrepreneurship Resources), which trains young people aged 18 to 30 in entrepreneurship and in information and communications technology.

The annual Imagine Cup competition challenges students to combine their ingenuity and technology skills to address some of the world’s toughest challenges and awards. The Imagine Cup Grants program provides successful teams with the funding and support to transform their project into a business or nonprofit.

The Opportunity Scholarship is a public-private partnership in Washington state that helps low- and middle-income residents earn bachelor’s degrees in science, technology, engineering and mathematics fields. Microsoft committed $25 million to the program.

The “Opportunity for Action” report is being unveiled today by William Reese, president and CEO, IYF, and Brad Smith, general counsel and executive vice president, Microsoft, during The Atlantic town hall discussion, which takes place from 8:45 a.m. to 11:30 a.m. Eastern Daylight Time. The event will be live streamed online, as well as available to view on-demand after the event, at https://events.theatlantic.com. Read more about the town hall here and here. You can also join the conversation on Twitter @Atlantic_Live, #FutureEd.