Scientists are reporting new evidence that the Deepwater Horizon oil spill has affected marine life in the Gulf of Mexico, this time species that live in dark ocean depths–deepwater corals.

The research used a range of underwater vehicles, including the submarine Alvin, to investigate the corals. The findings are published this week in the journal Proceedings of the National Academy of Sciences (PNAS).

The scientists used a method known as comprehensive two-dimensional gas chromatography to determine the source of the petroleum hydrocarbons found. 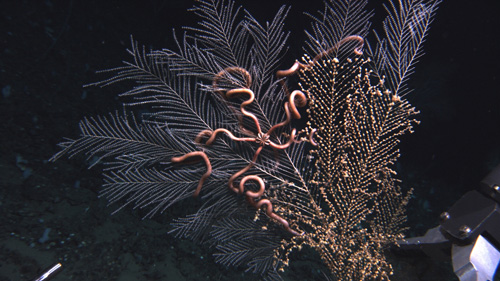 The lead author of the paper, chemist Helen White of Haverford College in Pennsylvania, is part of a team of researchers led by Charles Fisher of Penn State University (PSU).

The group includes Erik Cordes from Temple University, and Timothy Shank and Christopher German from the Woods Hole Oceanographic Institution (WHOI), which operates the submersible Alvin.

Fisher, Cordes, Shank and German are co-authors of the paper, along with other scientists from WHOI, Penn State, Temple and the U.S. Geological Survey. 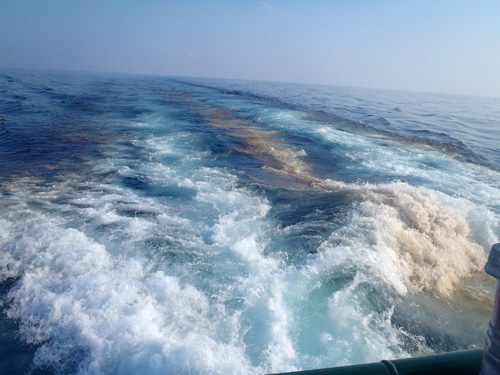 Oil bubbles in the wake of an oceanographic research vessel on its way to the Gulf spill site. Image credit: WHOI

“The biological communities in the deep Gulf of Mexico are separated from human activity at the surface by 4,000 feet of water,” says White.

“We would not expect deep-water corals to be affected by a typical oil spill. But the sheer magnitude of the Deepwater Horizon oil spill makes it very different from a tanker running aground and spilling its contents.

Because of the unprecedented nature of the spill, its effects are more far-reaching than those from smaller spills on the surface.”

The study grew out of a research cruise in October 2010 that was part of a Bureau of Ocean Energy Management and National Oceanic and Atmospheric Administration project. 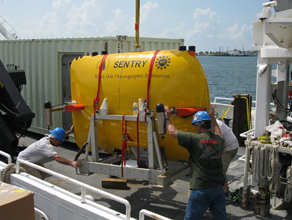 But when the ROV explored another area 11 kilometers to the southwest of the spill site, the team was surprised to find coral communities covered in a brown flocculent material and showing signs of tissue damage.

“We discovered the site during the last dive of the three-week cruise,” says Fisher.

“As soon as the ROV got close enough to the community for the corals to come into clear view, it was obvious that something was wrong. There was too much white and brown, and not enough color on the corals and brittle stars.”

Once the scientists were close enough to zoom in on a few coral colonies, “there was no doubt that this was something we had not seen anywhere else in the Gulf,” says Fisher. “This is what we had been on the lookout for, but were hoping not to see.” 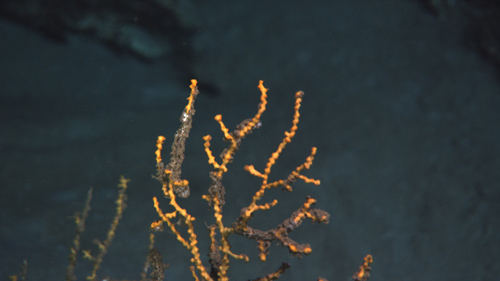 The coral communities were at a depth of 4,300 feet in close proximity to the Macondo well, which had been capped three months earlier after spilling an estimated 160 million gallons of oil into the Gulf.

At the time the damaged corals were spotted, the effects could not be directly linked to the Deepwater Horizon oil spill.

Then in December, 2010, the scientists set out on a second research cruise to the Gulf.

“Through the RAPID award,” says Rodey Batiza of NSF’s Division of Ocean Sciences, “the researchers were able to analyze the oil spill’s effect on the area’s deep-sea corals, and compare changes in the corals’ condition over a relatively short time-period.”

It’s easy to see the effect of oil in surface waters, “but this was the first time we were diving to the seafloor to look at the effects on deep-sea ecosystems,” says White. 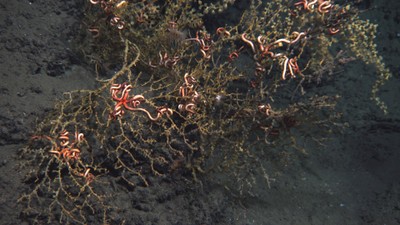 The team used the autonomous underwater vehicle Sentry to map and photograph the ocean floor, and the submersible Alvin to get a better look at the distressed corals.

Alvin holds a pilot and two passengers, and is equipped with viewports and cameras.

Alvin also has robotic arms that can manipulate instruments to collect samples. During six dives in Alvin, whose manipulator claws were modified with a cutting blade, the team collected sediments and samples of the corals and filtered material from the corals for analysis.

“Collecting samples from the deep ocean is incredibly challenging, and Alvin is crucial to this kind of work,” says White.

“The primary aim of the research was to determine the composition of the brown flocculent material covering the corals, and the source of any petroleum hydrocarbons present,” says White.

Because oil can naturally seep from cracks in the floor of the Gulf, pinpointing the source of petroleum hydrocarbons in Gulf samples can be challenging, especially since oil is made up of a complex mixture of chemical compounds.

However, there are slight differences in oils that can be used to trace their origin. 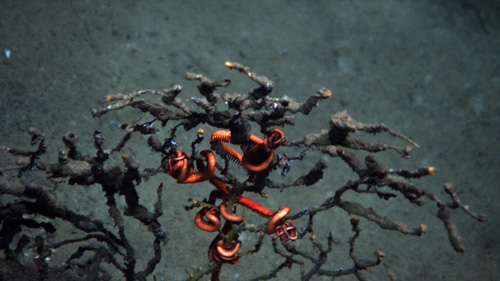 To identify the oil found in the coral communities, White worked with Christopher Reddy and Robert Nelson at WHOI using an advanced technique called comprehensive two-dimensional gas chromatography, pioneered by Reddy and Nelson for use in oil spill research.

The method, which separates oil compounds by molecular weight, allows scientists to “fingerprint” oil and determine its source.

This petroleum analysis, coupled with a review of 69 images from 43 corals at the site performed by Pen-Yuan Hsing of PSU, yielded evidence that the coral communities were affected by oil from the Macondo spill.

“These findings will have a significant effect on deep-water drilling, and on the monitoring of oil spills in the future,” White says.

“Ongoing research in the Gulf will improve our understanding of the resilience of these isolated coral communities and the extent to which they are affected by human activity.

“Oil had a visible effect on the corals, and it’s important to determine whether they can rebound.”