Regrowing Hair: UCLA-VA Researchers May Have Accidentally Discovered a Solution

It has been long known that stress plays a part not just in the graying of hair but in hair loss as well. Over the years, numerous hair-restoration remedies have emerged, ranging from hucksters’ “miracle solvents” to legitimate medications such as minoxidil. But even the best of these have shown limited effectiveness.

Now, a team led by researchers from UCLA and the Veterans Administration that was investigating how stress affects gastrointestinal function may have found a chemical compound that induces hair growth by blocking a stress-related hormone associated with hair loss — entirely by accident.

The serendipitous discovery is described in an article published on Feb.16 in the online journal PLoS One.

“Our findings show that a short-duration treatment with this compound causes an astounding long-term hair regrowth in chronically stressed mutant mice,” said Million Mulugeta, an adjunct professor of medicine in the division of digestive diseases at the David Geffen School of Medicine at UCLA and a corresponding author of the research. “This could open new venues to treat hair loss in humans through the modulation of the stress hormone receptors, particularly hair loss related to chronic stress and aging.” 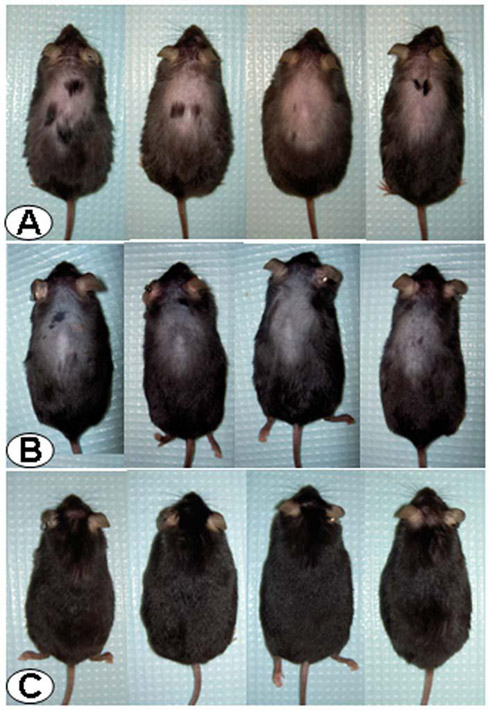 The research team, which was originally studying brain–gut interactions, included Mulugeta, Lixin Wang, Noah Craft and Yvette Taché from UCLA; Jean Rivier and Catherine Rivier from the Salk Institute for Biological Studies in La Jolla, Calif.; and Mary Stenzel-Poore from the Oregon Health and Sciences University.

For their experiments, the researchers had been using mice that were genetically altered to overproduce a stress hormone called corticotrophin-releasing factor, or CRF. As these mice age, they lose hair and eventually become bald on their backs, making them visually distinct from their unaltered counterparts.

The Salk Institute researchers had developed the chemical compound, a peptide called astressin-B, and described its ability to block the action of CRF. Stenzel-Poore had created an animal model of chronic stress by altering the mice to overproduce CRF.

UCLA and VA researchers injected the astressin-B into the bald mice to observe how its CRF-blocking ability affected gastrointestinal tract function. The initial single injection had no effect, so the investigators continued the injections over five days to give the peptide a better chance of blocking the CRF receptors. They measured the inhibitory effects of this regimen on the stress-induced response in the colons of the mice and placed the animals back in their cages with their hairy counterparts.

About three months later, the investigators returned to these mice to conduct further gastrointestinal studies and found they couldn’t distinguish them from their unaltered brethren. They had regrown hair on their previously bald backs.

“When we analyzed the identification number of the mice that had grown hair we found that, indeed, the astressin-B peptide was responsible for the remarkable hair growth in the bald mice,” Mulugeta said. “Subsequent studies confirmed this unequivocally.”

Of particular interest was the short duration of the treatments: Just one shot per day for five consecutive days maintained the effects for up to four months.

“This is a comparatively long time, considering that mice’s life span is less than two years,” Mulugeta said.

So far, this effect has been seen only in mice. Whether it also happens in humans remains to be seen, said the researchers, who also treated the bald mice with minoxidil alone, which resulted in mild hair growth, as it does in humans. This suggests that astressin-B could also translate for use in human hair growth. In fact, it is known that the stress-hormone CRF, its receptors and other peptides that modulate these receptors are found in human skin.

The finding is an offshoot of a study funded by the National Institutes of Health.

UCLA and the Salk Institute have applied for a patent on the use of the astressin-B peptide for hair growth.

The Salk Institute for Biological Studies is one of the world’s preeminent basic research institutions, where internationally renowned faculty probe fundamental life science questions in a unique, collaborative and creative environment. Focused both on discovery and on mentoring future generations of researchers, Salk scientists make groundbreaking contributions to our understanding of cancer, aging, Alzheimer’s, diabetes and infectious diseases by studying neuroscience, genetics, cell and plant biology, and related disciplines. Faculty achievements have been recognized with numerous honors, including Nobel Prizes and memberships in the National Academy of Sciences. Founded in 1960 by polio vaccine pioneer Jonas Salk, the institute is an independent nonprofit organization and architectural landmark.

The David Geffen School of Medicine at UCLA ranks among the nation’s elite medical schools, producing doctors and researchers whose contributions have led to major breakthroughs in health care. With more than 2,000 full-time faculty members, nearly 1,300 residents, more than 750 medical students and almost 400 Ph.D. candidates, the medical school is ranked seventh in the country in research funding from the National Institutes of Health and third in the United States in research dollars from all sources.