GAINESVILLE, Fla. — The psychological effects of the BP oil spill, the largest recorded environmental disaster in human history, extend far beyond people living around the areas of the Gulf of Mexico that were directly impacted by the spill, a new study finds.

Writing in the online edition of the journal Environmental Health Perspectives, a publication of the National Institutes of Health, the researchers reported that even in areas that did not have oil exposure, people still experienced elevated levels of anxiety and depression and reduced ability to show resilience in difficult emotional and financial situations because of the disaster.

“The findings highlight the substantial psychological impact that the oil spill has had on coastal communities in Florida and Alabama,” said Dr. J. Glenn Morris, a UF public health expert in the department of medicine and director of the Emerging Pathogens Institute. “In particular, the impact was not directly related to the amount of oil that reached an area. Instead, it correlated most closely with financial loss resulting from the spill.” 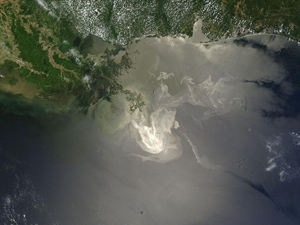 The researchers asked the study participants — mostly men involved in the Gulf fishing industries, or people who had suffered direct financial damages because of the spill– to answer a range of psychological questions, from how their financial circumstances were affected by the spill to how well they were able to cope in the months following the disaster. Participants were also assessed on cognitive tests to determine dexterity, speed and attention span.

Among people living in Franklin County, where oil had not reached the shore, participants showed similar levels of anxiety, depression, fatigue, anger and overall mood disturbance as the citizens living in Alabama’s directly affected communities, especially if the participant’s livelihood depended on fishing or had been directly impacted financially by the spill. Since the spill, many buyers have avoided Gulf seafood, despite assurances from the Environmental Protection Agency that seafood is safe to eat. Citizens in both communities are still relying on claim checks from BP, which, say UF researchers, is discouraging some from re-entering the fishing industry.

Study organizers also examined citizens’ perceived risk of calamity. For months, the local and national media forewarned the oil would wash up along Franklin County’s shoreline. According to the researchers, this generated concerns among many citizens of the county, leading in some instances to anxiety that natural events, such as red tide or protein scum, represented oil sightings. Other residents were convinced that the government was covering up information and that the spill had already reached Franklin County.

“One of the things that caught us by surprise, from the mental health perspective, is that we wouldn’t expect to see such a strong peak of mental health issues until about three years after a disaster,” said William T. Mahan, a faculty member of the UF Institute of Food and Agricultural Sciences Florida Sea Grant Extension Program and an author on the paper. “Three years is the typical time period for major mood disturbances to manifest.”

The paper’s authors will continue to monitor domestic violence, substance abuse and long-term rates of stress and depression, all of which are on the rise in both counties. Studies conducted six years after the 1989 Exxon Valdez oil spill, which only examined direct exposure to that spill, found that Alaskans exposed to that spill still suffered from mood disturbances significantly correlated with income and resource loss. The researchers are calling for greater longitudinal analysis of the psychological effects of the BP spill, as well as long-term community-academic partnerships in the two counties, where emergency mental health services, they say, are still lacking.